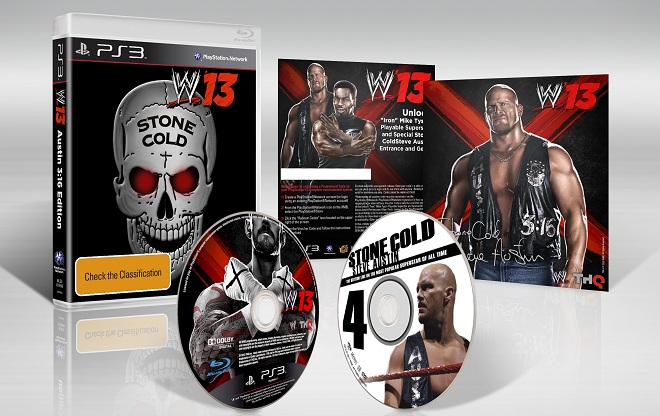 Get excited, Aussie and New Zealand fans, as this Collector’s Edition is available exclusively through EB Games and as the title implies, it features everyone’s favourite antihero Stone Cold Steve Austin. We’ll leave it to THQ themselves to detail just what the Austin 3:16 Collector’s Edition of WWE 13 contains.

THQ Inc. today announced WWE Hall of Famer Stone Cold Steve Austin® will be featured through the “Austin 3:16” Collector’s Edition of WWE® 13, the forthcoming release from the revolutionary WWE flagship videogame franchise.  Renowned for his unrelenting, antihero behaviour, Austin is often celebrated for revolutionizing the WWE landscape during one of the company’s most prominent time periods in history: the “Attitude Era.”  Available exclusively in Australia and New Zealand for the Xbox 360® videogame and entertainment system from Microsoft and PlayStation®3 computer entertainment system through EB Games, the “Austin 3:16” Collector’s Edition is currently scheduled to offer the following items:

WWE ’13 is currently in development for the Xbox 360, PlayStation 3 system and Wii™ system from Nintendo, with a scheduled release date of November 1, 2012 in Australia and November 2 in New Zealand.  For more information, please visit wwe.thq.com, facebook.com/WWEgames and twitter.com/WWEgames.

I don’t even particularly like wrestling games and I’m tempted by this collector’s edition. Those interested in pre-ordering this beauty should head over to their local EB Games store. Those outside of Australia can pre-order the Austin 3:16 Collector’s Edition via Shop.thq.com.