America is all about the three M’s… mullets, muskets and monster trucks.  Too bad there isn’t a video game that has all three of those things.  But wait, now there is!  You’ll be able to celebrate all of those things, and a whole lot more in the new Independence Day update for GTA Online.  Read on for the details.

The news came earlier today over on the official Rockstar Newswire.  The Independence Day Special, as it is called, is a free update which includes a multitude of America – themed goodies. 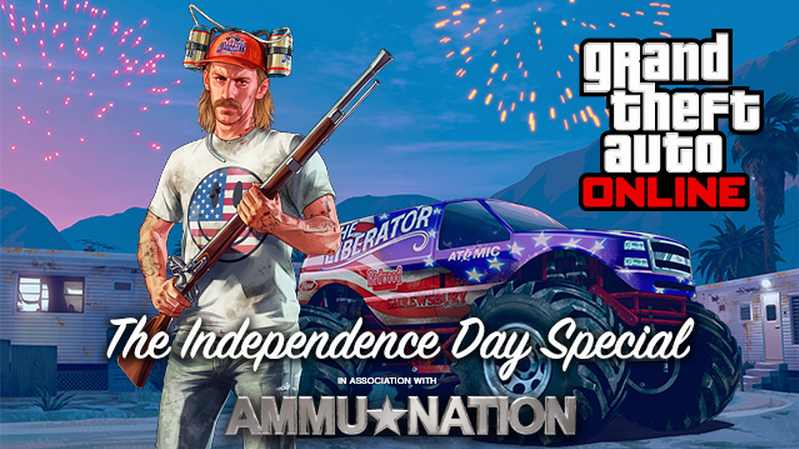 For vehicles, there’s the new Liberator monster truck, and the Sovereign motorcycle, both painted in the most patriotic of colors.  New weapons include an old fashioned musket, and a rocket launcher that fires fireworks because why not?  Seven new properties have been unlocked, all with more than enough room to set off your own customizable fireworks show.  Yes, GTA Online now has fireworks.  12 different varieties in all.  You’ll even be able to ride the Ferris Whale and Leviathan roller coaster on Pleasure Pier.  The update also comes with over 40 new patriotic clothing and hair style options, including America’s favorite hair style: the mullet.

All of the above items will be available for purchase in the team through mid-July, and will remain in your inventory after the Independence Day Special has expired.  The new properties for sale, and the ability to access the rides on Pleasure Pier are permanent additions to the game.  In addition to all that American awesomeness, the update also implements a number of fixes and tweaks.  Check out the full list below.