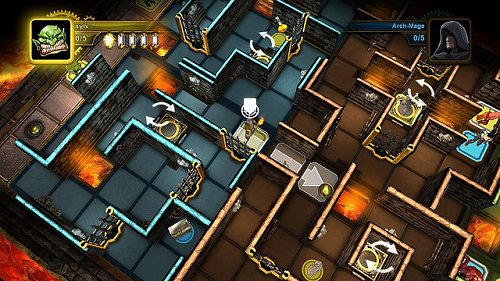 Fans of the fantasy board game Dungeon Twister take note – the video game adaptation of your beloved game will be coming to the PSN July 3.

French developer Hydravision will be overseeing its release, and the game will be priced at a modest $10. Use of the Playstation Eye has also been included, allowing players to talk to those they are competing against. The PSN version will support both online multiplayer and single player.

For those of you unfamiliar with the premise of the game, the game’s creator, Christophe Boelinger, had the following to say on Playstation’s Official Blog:

So what is Dungeon Twister? It is a turn-based strategy game that some describe as a mix between chess and Dungeons & Dragons. The story is simple: A powerful character called the Arch-Mage has discovered immortality. But he’s bored to death, so he enlists dwarves and gnomes to build labyrinths equipped with mechanical rooms — the Dungeon Twisters — then populates them with hapless adventurers and creatures. The combatants must avoid traps, fend off attackers, and learn the secrets of the labyrinth in order to escape alive. All this occurs under the watchful eye of the Arch-Mage, who awards points when he’s satisfied!

So grab some friends, mark July 3 on your calendar (psst…that’s tomorrow) and get ready for some challenging cerebral gameplay. Turn-based, of course.