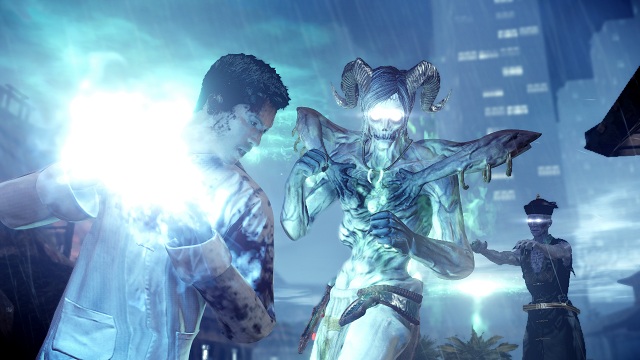 Zombie content pack update alert! Yes, this zombie fixation the games industry has has struck again, although perhaps this time we can blame Halloween for influencing this new add-on for Sleeping Dogs.

Nightmare in North Point is the latest addition to the Sleeping Dogs content packs, and it revolves around Big Scar Wu. For those familiar with the game lore, Big Scar Wu was a rather nasty triad gangster who was murdered by the Grand Dragon in an exceptionally gory way – they stabbed him 42 times before feeding his corpse to the grinder at the Smiley Cat cat food plant.

Cue some ancient mumbo-jumbo magic and Big Scar Wu, now affectionately renamed Smiley Cat, rises from hell to exact his revenge, accompanied by an army of Jiang Shi (the Chinese version of a zombie whose name translates to ‘stiff corpse’). His mission? To destroy the Sun on Yee and create Hong Kong’s most feared criminal empire.

It’s now up to Wei Shen to defeat Smiley Cat and his army, with Wei seeking out the most powerful of Chinese magic. Nightmare on North Point will be available October 30 and downloadable from the Playstation Network, Xbox Live Marketplace and Steam.

The Sleeping Dogs ‘Nightmare in North Point’ teaser trailer is below.