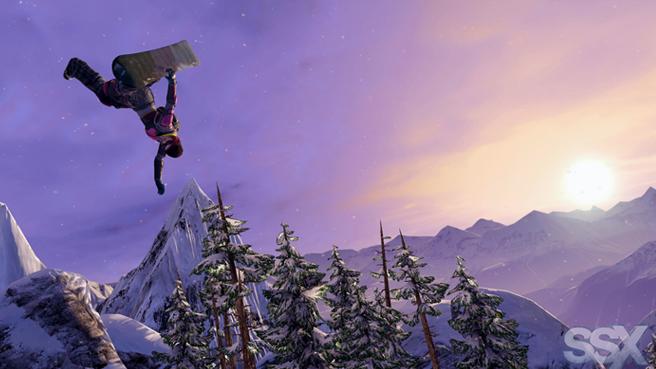 Start waxing up those boards!  You do wax snowboards, right?  Or is that a surfing thing?  Whatever.  The SSX demo has arrived!  After a long absence from the collective gaming consciousness, the much beloved (at least by me) snowboarding franchise is back at last.  So what should players expect after they download this thing?  Read on for the details.

The demo contains four distinct modes: two tutorials and two events.  The tutorials cover both aerial and ground based riding and tricking, allowing you to get a feel for the controls before tackling the more complex event modes.  The events include a race set in the Rockies, and a freestyle trick event which takes place in New Zealand.  It is unconfirmed at this time whether Gandalf and Aragorn are unlockable characters for the New Zealand level, but I think that would be pretty bad ass.  The demo is online enabled, which means you’ll be able to swap ghost films of your best rides with your friends, and challenge them to do better.  The good folks at EA even whipped up an informative video tutorial which should help players unfamiliar with the SSX brand.

Is it just me, or did that commerical make you feel all warm and fuzzy inside?  The gameplay, the music, the characters… it just feels great to see this series on the rise again.  And I gotta tell you, after covering so much Mass Effect 3 news lately, it’s nice to see a game that doesn’t involve brutal combat, dead children, and human suffering on an unimaginable scale.

The SSX demo is live right now on Xbox Live, and should be up on PSN as well.