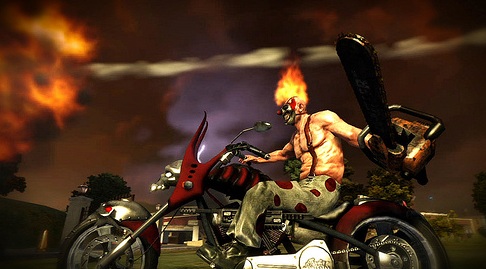 Rev up those engines and polish those machine gun barrels, European Twisted Metal fans, as the upcoming game in the Twisted Metal series has been given a March 7th release date across Europe. This news comes straight from David Jaffe’s official twitter feed, where the CO Director and Lead Designer of the game announced that Twisted Metal will be released across all SCEE territories on that date.

The new announcements didn’t stop there, however, with Jaffe going on to mention that the game will feature two-player splitscreen gameplay. His full series of tweets in relation to the topic:

“Let me be 100% clear :)- there IS 2 player split screen online in new TM. There is NOT online campaign co-op BUT there IS LOCAL split screen co-op. Does that help/make sense? I know it can get a bit confusing:)…but there is 100% s-screen online!”

According to Jaffe, the reason for the lack of an online co-op campaign mode was simply down to the fact that the studio did not have enough time to complete it and tune it before the game’s release.

It’s good to hear that the game won’t be shipping with a haphazardly slapped together online co-op campaign mode, but being a Twisted Metal fan I was looking forward to experiencing the campain all the way through with some of my international friends. Guess I will have to make do with other online mode gameplay, or invest in those ‘local friends’ I’ve heard so much about to co-op the main campaign.

Anyone looking for a girl who loves her games and has too many pop culture themed tshirts to fit in her closet? I’d make a fantastic friend, I really would!