Bastion… Stranded on a Rock in the Sky 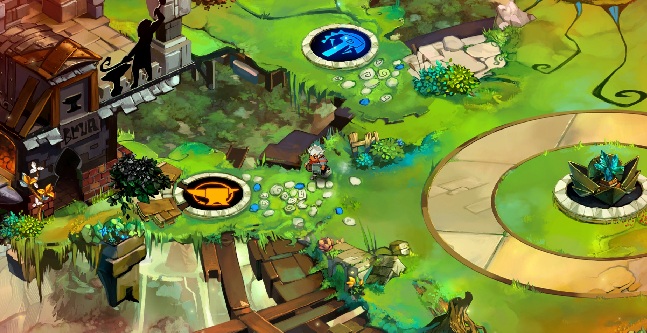 Bastion is basically a simplistic narrative buoyed by a surprisingly deep combat system… I am usually not one for such single player experiences but Bastion provides an engaging world to play in and an intriguing little story to follow.

At its heart Bastion is an RPG with basic levelling mechanics and deep customisation to abilities, weapons, and difficulty. This provides an engaging means to wander the world repeatedly but there are charming little quirks with the simplistic narrative that also makes it stand out in its own way.

The set up is surprisingly abrupt: Immediately the player is simply thrust into the role of The Kid and the adventure begins. The first thing that will hit you is the narrator, a grizzled yet smooth talking old man that will continually interject notes, exposition, and even observations based on what the player just did or did not do. This narration is the main vehicle for the story and is actually a nice and different means to convey the adventure as the player marches through the game. This narration does mean that characters are “mute” in the sense you don’t actually have dialogue, but the voice carrying on in the grand history of ancient storytellers. While it doesn’t work for every game, I personally loved the little touch of flavour it adds. This means that character development is almost wholly reliant on narration and that if the player does not stop to pay attention a great deal of information can be lost. While a danger, it really isn’t a negative since there is not a huge cast of characters and much of the game revolves around the atmosphere of the situation rather than the characters themselves.

Also of note here is the strange form in which the world appears as The Kid moves around the world. The screen will start with a centralised portion of land with no surrounding areas, but as The kid nears certain edges tiles of land and shrubs and various objects will float up and lock into place. It is an interesting device for exploration and does promote some replayability since you can conceivably miss out on large tracts of game world when you hit objective points. The central hub to the game is the titular Bastion where the player routinely returns to after foraying into the world for cores, the main objectives in the game. Here the player has the option to equip weapons and skill via the Arsenal, set ability potions via the Distillery, purchase upgrades via the Forge, and eventually purchase miscellaneous objects from a Lost and Found, set enemy behaviour via a Shrine, and complete vigils at a Memorial. These are all technically optional, but they add a layer of customisation to this game that allows options for multiple playthroughs.

The game doesn’t hold back on getting to the action either. Almost immediately The Kid picks up his trusty hammer and the game gives the pop up note on how to attack. Then, a simple walk further down the road and a simple little battle gives you a taste of what is to come. The system is exceedingly simple in execution but immensely deep in variety. There are two buttons, X and A, mapped for weapon attacks, the LT is mapped for blocking, the RT for special attacks, and A for rolling/dodging. It is a simplistic battle system in that sense, but as the game goes on the variety deepens. By the end of the game The Kid will be able to mix and match a rather sizeable amount of weapons with varying attributes and types of attacks… the simple hammer to a spear to a rifle. These are further augmented by a variety of special skills obtained throughout the game. Any weapon can be mapped to either B or X, but only two weapons can be equipped at a time while only one special skill can be mapped to the RT button at any time.   As stated above, this is done through the Arsenal in the Bastion or at set points in most maps. Given the variety of weapons and skills and the simplicity of the system, combat is fun and engaging.

The game is rather easy at first, though later levels will offer a small challenge from time to time. But once the player upgrades the Bastion to house The Shrine, the player can choose to call on the gods and activate varying attributes that will grant enemies different bonuses such as more strength, regenerating heath, random attack blocks, and such. These can make the game much more difficult for those players seeking a challenge. In fact, certain sequences become a test of tactics and wit instead of simple button presses given that enemies can easily overwhelm someone with just 4 of these gods called on. It is a rewarding challenge especially given this is also the mechanic the game will award points to the player that will determine their place on online leaderboards. This game is not cooperative or truly competitive, but it is a nice little try to incorporate some competition and urge players to test out the various abilities granted by the gods at The Shrine.

The main sequence of the story itself is rather straight forward and short, between 6-8 hours on first playthrough if one just sticks to the main path. It is easily marked and the final stage will give the player notice that it is the point of no return so one can go back and finish any secondary objectives if they so choose. Speaking of secondary objectives, there are a small number of them available. Many are available as vigils through The Memorial. These vigils are challenges that a player can complete as they progress through the game such as completing weapon training in the proving grounds or raising a set number of tiles of land.   The basic ones are a proving ground for each weapon that has a set objective to obtain a set of three prizes for each proving ground, finding “pets” in the world, or finding objects that will act as a launch for mini areas that give background on a few of the characters involved as well as provide a battle ground for people seeking to rise up a specific leaderboard. They are nothing on the level of larger RPG titles, but these nice little side tours offer some fun and deeper understanding to the world while also adding a few hours to the overall gameplay.

There are two points in the story where the game allows the player to make a branching choice. While nothing mind shattering or game changing, they do grant a reason to play through again to try a new route if the player so chooses. Which brings us to New Game + and the save feature. Bastion utilises a checkpoint only save system with only a spinning gear as a prompt to notify the player the game has saved. If the player dies twice, or three times given an ability, the game will give the player the option to restart that stage or return to The Bastion. But, once any stage is cleared there is no returning to that stage during the course of that particular game. However, once beaten the New Game + option becomes available on the main menu and the player will start with all weapons and XP gained up to that point, so a subsequent run through the game to obtain any missed items or vigils will be quicker and easier.

Lastly… the music: the few times the music comes to the forefront of the game it is splendid and fits the realm perfect  Of note are the songs that play in the final sequences of the last stage and the credit roll at the end of the game. They are understated, more melancholic melodies that really add to the atmosphere that the game has set up over the hours of exploration. There is also an item in game that will allow the player to switch the tune playing at The Bastion. Nothing major, but it adds another small layer of customisation to a game that really thrives of letting the player tinker around with many different aspects of the game.

Overall, Bastion is a rather charming and unique experience that manages to make a sizeable impression for what it offers. I would eagerly recommend this game to any gamer that enjoys a good little story built around a surprisingly deep RPG. Even if you are not an avid RPG fan, this game can be fun for any number of gamers, especially with its addictive charm.