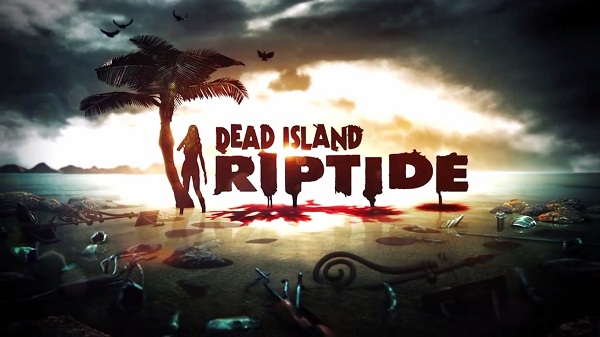 I came a few months late to the Dead Island party.  I bought the game fairly quickly, but due to the packed nature of the latter half of 2011 I didn’t get around to it till April of 2012.  From then on I was hooked.  It’s one of the few games from the past few years I routinely go back to over and over.  So, you can imagine my eagerness when Riptide was announced.  I pre-ordered the first day it was allowed.  Still, there was some anxiety that they’d change up too much or screw with what worked in the first game.  Despite interviews from Techland/Deep Silver, I kept my expectations muted.  Well, I didn’t have to worry one bit.  I wanted more Dead Island and that is exactly what I got.

And that says it all really.  Riptide, just like Dead Island starts off with the survivors of a deadly zombie outbreak scrambling to survive, though initially the nature of how bad the outbreak is, is still a mystery.  The same four survivors from the last game are still playable characters, joined by a fifth new character in John Morgan.  You can choose to start a new run of any character and start at level 15 with points to distribute or you may choose to import any file from the first game, finished or not.  You will simple be starting out at whatever level is being imported.  Each character has a slightly different skill set that tweaks how one can play the game, with the newbie’s amazing melee abilities are just maniacal laughter inducing blasts of pure awesomeness.  I never once got sick of punting zombies all over the place,  but ultimately, the combat isn’t all the different from the first game.   Any difference is a minor, yet enjoyable improvement that only makes it that much more addicting.  By the end, I couldn’t decide if I wanted to punt zombies, beat them into a pulp with knuckles, pop their heads with a sniper rifle, or wade in with a modified katana to lay waist like a ninja on steroids.  So much to do, so many zombies to kill, and so many ways to gleefully dismember them!

Combat is relatively simple, though challenging.  And maybe more so in Riptide than in the first game.  You still have the stamina meter and everything mechanically works the same, but the improved hordes that bum rush you will often overwhelm you, despite the weapon improvements.   This isn’t a bad thing at all.  You only lose a little money and spawn nearby.  It will just happen a lot more in Riptide than you might expect.  But really, while sometimes it might get a little annoying I can’t help but notice that it actually feels a little more like a zombie apocalypse than before.  And playing alone is a lot more nerve wracking.  Even playing with friends has provided some hilarious girlish screams a few times.  Not from me…. nope.  Not one.

Speaking of zombie hordes, there are a few new additions to the decaying army as well as horde siege defenses that add layers of challenge and strategy to this game.  The horde siege defense is simply a mission that will occur a few times at a home base, where you must fight off a large horde of zombies with the NPCs and co-op friends (special note: any playable character that isn’t taken by a friend will actually be seen and fight in game at these bases   (little thing, but very much welcome).  They will slightly differ based on each base, but they are basically reliant on putting up fences to keep the horde at bay while you slowly thin it out.  Of course, they will get through and then the chaotic scramble to survive begins.  And I mean scramble to survive.  These hordes will throw a slew of zombies at you: new and old.  All the old standards are there, but Riptide introduces special infected, drowners, floaters, wrestlers, grenadiers, and screamers.  Some are twists on variations of zombies we have seen before while some are annoyingly destructive, even to a party of players.  Even outside of the horde sieges, hordes  are quite frequent.   Every corner is just another chance to scream “Oh shit!” and run for the nearest door in a wild panic as a dozen infected scream after you with the encouraging thud of a wrestler not far behind.  I mean, really, how can you not love that?! 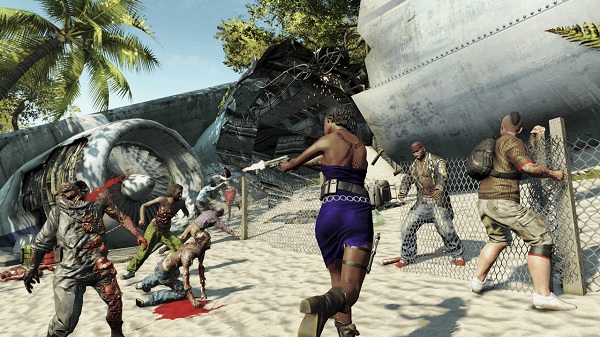 Though, admittedly, it wears thin in long spurts if you are only playing single player.  This is not a bad thing though.  The same thing is true of the Borderlands franchise. The center and focus of Riptide is the co-op experience.  There is nothing like walking side by side with a friend before deviously circling a thug and punching the crap out of it with two pairs of knuckles.    Or of course run madly into a group of zombies only to lure them back to a narrow corridor with a teammate waiting to lay waste with a grenade.  If you aren’t careful, you can find hours disappearing into the island of Palanai as you and friends bring hell to the unsuspecting hordes.  Single player can last me a couple hours before I need a break, but I’ve already had one all day session on this game in co-op.

Which brings us to the last segment –  story.  As many know I’m a story junkie for the most part.  And while Dead Island as a franchise is built around the premise of co-op zombie annihilation, there is still an actually intriguing story behind it all.  While I can’t divulge much without spoiling, I will say I was pleasantly surprised by the increased complexity that is being built into the story, while also amazed at the depth of the characters that many seem to either miss or ignore.  By the end of the game, I actually felt I understood how and why the characters ended up doing the things they would do through-out the game.  It wasn’t all about a cardboard cut out just there to smash zombies… there was depth and reason and development.  Now, I am not saying these characters are on the level of Mass Effect, Dragon Age, or various Final Fantasy installments.  I’m saying that  for an open world game focused on zombie slaying, there is a surprising depth and richness I didn’t expect to find that actually makes the game more impactful to me.

However, to just be fair there are still some little issues with the game.  Much like the predecessor, and any open world game, there are a variety of glitches that can pop up from time to time.  Anything from the sound dropping out, to a thrown weapon being irretrievable, to some rare freezes.  There are things that will need to be addressed in some future patches.  But the game mostly plays smoothly and I can honestly say that in the dozens of hours put in, I can only recall maybe 5 incidents.

So, at the end of the day I ended up with a game that had a compelling enough story, decent characters, and 20+ hours of zombie slaying fun.  What more can you really ask for?  When I was finished and the credits rolled, I was left with the same anxious excitement for another installment.  Dead Island: Riptide was everything the first Dead Island was, with some minor tweaks and improvements to add on to the experience.  If you were a fan of the first game’s zombie slaying madness, then more than likely you will be right at home with this game.

Techland/Deep Silver did not bother reinventing the wheel.  This game is very content in sticking with the Dead Island formula… and thank god for that.