I sprinted across the desolate valley, my feet falling heavy in the freshly fallen snow. An alarm rang incessantly in my ear, reminding me that my shields were almost gone. Behind me, I could hear the whine of a banshee driving towards me, getting closer and closer. The pilot was peppering me with his plasma cannons, and my health was going to run out any second. But just ahead of me, laid my salvation. Another plasma shot hit me from behind. It was now or never. I strafed left, strafed right, and finally, I was on top of it. In one fluid motion, I grabbed the rocket launcher, spun around, and fired at the banshee, blowing it to pieces. Its smoking wreckage skidded to a halt at my feet. I felt like a god.

That happened almost ten years ago, but I remember it as if it happened yesterday. It is the most vivid gaming memory I have by far, and it was the moment I became a Halo fan. Since then, my love and appreciation for the franchise has grown to an arguably unhealthy level. I’ve greeted the release of every subsequent Halo title with unbridled anticipation. But not this time. You see, these are strange times to be a Halo fan. Bungie Studios, the developer responsible for creating the franchise, and for making every game in the series thus far, has moved onto its next big thing. In its place, an in-house studio by the name of 343 was formed at Microsoft to carry on the Halo franchise. This new studio’s first offering is Halo: Combat Evolved Anniversary, a remastered version of the groundbreaking original. But this game is more than just a reissue. It’s a test. Halo fans (and by Halo fans, I mean me) are fiercely loyal to Bungie, and are looking to this game to see if the franchise is in good hands. So let’s take a look at Halo Anniversary. What’s changed, what’s the same, and what the game says about the franchise’s future.

The biggest thing that has changed, obviously, are the graphics. The game has been given a complete visual overhaul, and it looks fantastic.  Individual blades of grass sway in the breeze, alien weapons sizzle with energy, and the game world feels alive in ways that the original never did. If you ever catch yourself wondering just how much better the game looks, the developers have included an option to switch back to Halo’s original graphics at any time. Simply pressing the back button will (after a few seconds) revert everything you see back to the way it appeared in 2001. It is a delightful addition to the game; something that generates both awe at how far the technology has advanced in the past decade, and a good helping of nostalgia for longtime fans like me. But be warned: this is not Battlefield 3. the graphics have been updated, but they are still far behind the bleeding edge of the genre. In fact, the visuals don’t even rise to the level of the last game in the franchise, Halo: Reach, which was released over a year ago. But you can’t really expect them to, since this is a remastering of the original game, not a complete remake. Also, there were a few instances where the environments were so cluttered with new scenery that the enemies became difficult to see. So reverting to the original graphics is not only a fun trip down memory lane, it can also be tactically smart. 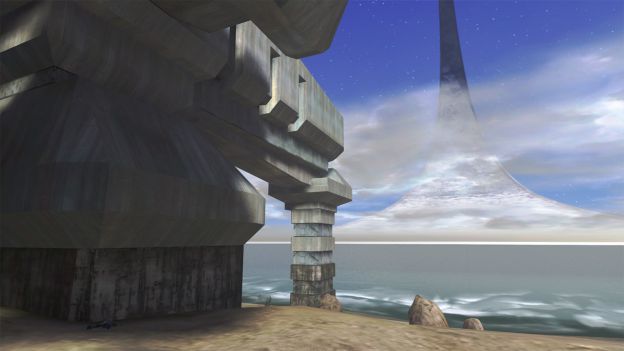 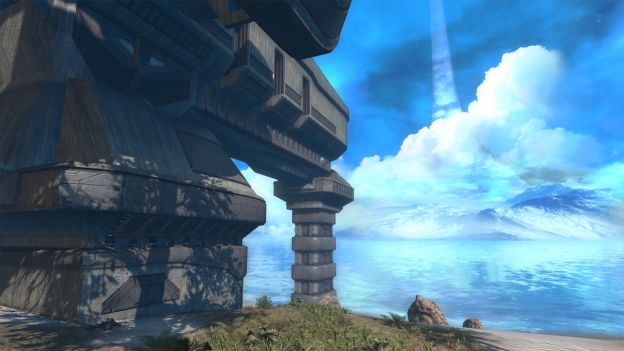 In addition to the visual makeover, the sound has been given a substantial upgrade. Weapon sounds have all been modernized, and the iconic original score has been enhanced with the addition of a 75 piece orchestra. The developers have even taken a few fun elements from later Halo games, and added them into Anniversary. Small skulls are hidden in out of the way spots throughout the campaign. Finding each one unlocks them in the options menu, and activating them allows you to do everything from increasing enemy strength, to removing your HUD, to giving yourself infinite ammo. Also waiting to be discovered are the terminals, brightly glowing panels that, when accessed, play short videos that fill in the backstory of the game, and offer teasing glimpses of what might be in store for Halo fans in the future. The game even includes support for 3D televisions and Kinect. The Kinect features range from the silly (audibly controlling the visual settings) to the fairly awesome ( scanning objects in the game world, and placing them into a special library which is only available to Kinect owners).

The other major change to the game is the multiplayer. As brilliant as the original Halo’s campaign was, it was really the multiplayer component that made the game a sensation. While it wasn’t the first game to offer multiplayer through system link, it was the first to truly bring the magic of LAN parties to home consoles. But instead of giving the original multiplayer a facelift like they did to the campaign, the developers have remade six classic multiplayer maps from Halo: Combat Evolved and Halo 2 using the superior graphics, controls, and features of the Halo: Reach engine. The transition from single to multiplayer can be a bit jarring at first, especially for new players. But the maps are a fantastic mix of the best Halo has to offer, and clearly show how far the series has progressed in the last ten years. Also included is an all new firefight map, and a co-op campaign mode which, unlike the co-op in the original game, can be played over Xbox Live.

Now onto what hasn’t changed. The gameplay in the campaign hasn’t been tweaked or touched one bit, and this is a decidedly mixed blessing. All of the classic enemy encounters from Combat Evolved are here, and they are still just as much fun as you remember. Whether you’re engaging a single enemy, or clashing with dozens at once, you never feel overwhelmed or out of control. The wide variety of weapons, vehicles, and environments are still impressive, ten years on. Most importantly, that undefinable I AM GOD element to Halo’s combat that made it so popular for so long is still intact. Whether it’s popping a grunt in the head with the classic Halo pistol, or blowing a banshee out of the sky with the Scorpion tank, at times, the game is still a total blast to play. 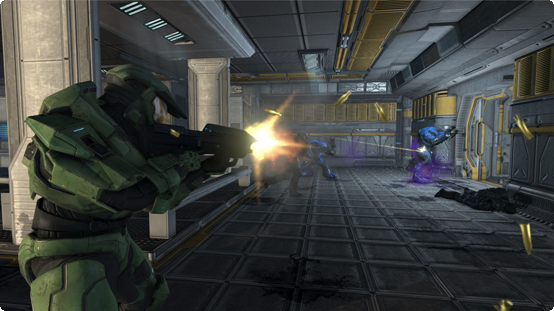 That is not to say there aren’t some shortcomings. This is, after all, a ten year old game. The first person shooter genre has gone through quite an evolution in the last decade, and no amount of fancy graphics can hide Halo’s aged presentation. The enemies are noticeably less intelligent than they are in subsequent Halo titles, and their reactions to incoming fire vary from adequate to downright laughable. Similarly, the vehicles lack the layers of polish they received in the numerous Halo sequels. The warthog controls, while still serviceable, are floaty and a bit numb. Simply put, what passed as groundbreaking ten years ago just isn’t all that great anymore. Most disappointing of all, though, are the repetitive level designs. Even back in 2001, players made note of the game’s occasional reliance on using the same interior elements over and over. And even though these sections now have a fresh coat of highly detailed paint, they are still as repetitive as ever. Worse still, they all still look exactly the same, so be prepared to get lost more than once. The addition of a more robust navigation system would have been much appreciated.

Judging the worthiness of Halo: Combat Evolved Anniversary is a bit tricky. As an exercise in nostalgia, it’s a resounding success, and longtime Halo fans will not be disappointed. The game will not only reaffirm your love of the franchise, but it will deepen your connection to it. The old memories it will trigger, and the new ones it will create, are worth the relatively low $39.99 US retail price. Even if you’ve never played a Halo game before, but have been looking for a way to introduce yourself to the series, Anniversary would be a great place to start. You’ll be able to experience one of the great single player campaigns of the last decade, and also see how far the series has come since then with the included Reach multiplayer maps. But for the hardcore FPS fan, there is less here to recommend.  From a strictly technical perspective, the game doesn’t hold up against the genre’s current crop of blockbusters. For that reason, players uninterested in Halo should probably look elsewhere for their shooter fix.

The biggest question (for me, anyway) is whether or not the Halo franchise is in good hands. After ten years of being synonymous with each other, Bungie and Halo are now heading in different directions. Before playing Anniversary, I was apprehensive. Even a little angry. Who did these new guys think they were, anyway? Taking over Halo? My Halo? But honestly, I shouldn’t have been worried. From the instant you load the game for the first time, you know that the men and women of 343 Studios have their hearts in the right place. These people love Halo. They live and breathe Halo, and they treat it with a sense of reverence that is both reassuring and a bit humbling. I can’t wait to see what they do next, and for my next great gaming memory to be made.