Ninja Theory’s new Devil May Cry sure is one hell of a ride. It immediately throws you into a demonic version of reality, which is a decaying and interactively evolving version of Earth, called Limbo. The new Dante can be ‘pulled’ into Limbo seemingly at will by the demons who inhabit it, and the world dramatically changes around him. The first level of the game takes place on the Santa Monica Pier (or something very similar) and it quickly evolves into a red, hyper-aesthetic and uncontrollably exciting nightmare.

Dante quickly rushes to get changed just as an unfamiliar character warns him that a creature called the ‘hunter’ has plans to pull him into Limbo. Bridges collapse beneath his feet as he runs, cars and trailers are thrown in seemingly random directions and arcade machines melt into a black tar as he walks past them. Every single step is filled with constant environment changes, even if it’s just a word like “kill him” suddenly flickering on a wall as enemies pop out before you. The levels are all equally creative, too, from the creepy-circus style pier to floating, cracked stairs in the sky, to factories and upbeat nightclubs, every single level has taken basic expectations of those locations, sucked them into limbo, and produced a hyper, larger, grittier and gravity-defying version of them. The level design is absolutely flawless, and absolutely amazing, in its aesthetic appeal and exciting unpredictability.

With such transfixing creativity in the levels, the game has a huge and unexpected focus on platforming. You’ll very quickly equip yourself with skills and tools to pull yourself towards objects, jump and glide towards them, or grab them and pull them towards you. A glowing red indicates a rock, brick or piece of seemingly stable building that is able to be pulled closer to Dante to bridge an impossible gap. Glowing blue means he’s able to flick a similar whip-like chain that will pull him towards it, and you’ll often need to glide to safety once you’ve let go of one of those. These two very simple items allow you to tear apart walls and glide towards them all the same, with Dante effortlessly pulling himself through the air. 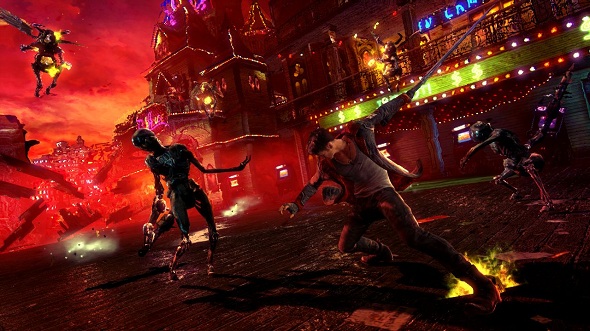 The platforming isn’t particularly difficult and it’s very often obvious, but that doesn’t stop it from having a whole lot of creative appeal and unpredictability. The blue and red icons aren’t noticeable from a distance, and you’ll never expect that the two will be useful in ways that they are. For example, one level has Dante trying to save a car from crashing into various things. You’ll have to use the blue chain to pull him onto a slowly flying shipping crate, so that he’s able to pull another out of the way to stop it from hitting the car, all in slow motion. It also means that the environments genuinely feel interactive, since you can drastically change the way they look – as though the demons closing walls in on you and pulling the ground from underneath your feet in quick sequences wasn’t enough. As the ground falls from before you when you’re floating countless stories high, you’ll need to quickly utilise jumps and pulls where you won’t expect them.

Along with the buildings themselves working against you at their own will, a small variety of demons regularly pop out to test your mettle in combat. Though new enemies are introduced throughout the game and boss fights all offer a different aesthetic, they all function basically the same. This means that combat is a slight weak point in its repetitive and tedious nature. Some enemies are casual drones, then there are bigger, slower guys with unblockable attacks and obvious weaknesses, and the occasional ‘holy crap that thing just teleported are all of those flips even necessary?’ type of enemies who pop up fairly often.

The mostly unexciting combat is almost excusable, though, since the surprising amount of weapons gradually introduced throughout the course of the game are all constantly accessible without any inventory. Instead, each weapon is assigned to its own unique button combination. Playing on Xbox, I would press ‘LT’ and ‘Y’ for a scythe, ‘RT’ and ‘Y’ for a heavy axe and ‘Y’ for a sword. There are both angel and demon weapons, too, with LT covering the angel, and RT covering the demon. Certain enemies are only weak to one or the other, and you can cycle through the different angel or demon weapons with a quick press of the d-pad. Moreover, there are 3 different gun types by the end of the game, each of which is surprisingly different in a game which focuses on hack n’ slash style combat. I did end up with fairly sore hands from holding down ‘LT’ so often, mind you. 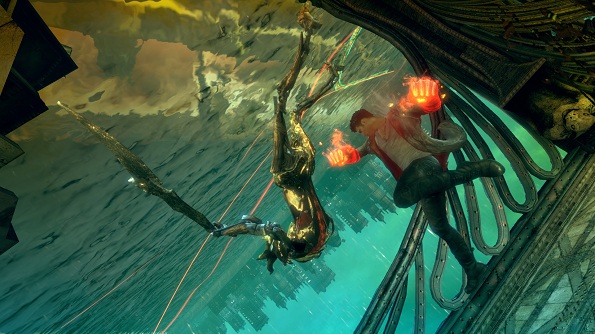 The game encourages you to rack up combos by alternating between all of Dante’s different weapons with a ‘style bar’. The bar grades you on the variety of moves you execute, and you’ll automatically lose a grade or two if an enemy hits you, though dodging attacks is easy enough. The system is fairly rewarding since at the end of the level you get an overall grade which also includes the time you took, the amount you died, the amount of items (health, mostly) you used and the collectables you found. I chuckled satisfactorily almost every time I got an ‘S’ – which is one above an ‘A’ – because a demon voice yells “SAVAGE!” as your final grade. Levels range from D to SSS and the simple demon voice acting is wholly loveable. It’s unexpected quirks like these that can make an otherwise dreary combat system, regardless of huge weapon variety, still make you strive to do your best. This is only complimented by an absolutely magnificent soundtrack that’s a mix of upbeat hardcore and Tron-style techno that gives this game a ‘hyper demonic’ feel.

DmC has a very significant emphasis on collectables, particularly with the aforementioned grading system. They come in a few different types – ‘lost souls’ which are creatures scattered around levels on walls, who all need to be hacked away with melee weapons. There are also keys to find which will open different levels of secret doors. The secret doors contain small mini-games that will require you to kill enemies in a certain way or with a certain weapon, and while they’re short enough to be fun, you can’t quit them once you’ve walked into a door. I got unlucky enough to open a gold door, which is the hardest, and accidentally walk into it twice. It required me to kill 7 enemies without getting hit which requires a whole lot of distance and evasion. I was fine to do it once, but knowing that I didn’t have the option to exit it even if I allowed myself to die just seemed wrong. You can’t force people to do optional side-missions by not allowing them to quit, damn you!

Getting the collectables will require a lot of revisiting missions, but you’ll need to do that anyway if you intend to beat the game’s various difficulties. These aren’t regular difficulties, either. They have different enemy waves, ones where everything (including you) dies in one hit, and then a final difficulty where only you die in one hit. It’s a compulsive completionists (or achievement/trophy hunters) nightmare considering the time it’ll take, and, expectedly, none of the secret doors or collectables are really that exciting. The actual diversity in difficulties instead of just ‘more health’ or ‘more defence’ definitely deserves commendation, though.

Grabbing collectibles and carefully styling your combos will very quickly lead to unlocking Dante’s many available upgrades. The better you perform, the more upgrades you can purchase, and they’re mostly new moves or more damage for moves you already have. This allows you to tailor to weapons you use most often, or upgrade things you don’t consider effective. It also lets you unlock new combos that look cool as hell, even if they can be hard to utilise when you’re frantically fending off 10 or so enemies.

Devil May Cry’s intriguing story itself is a little bit rushed, in that you find out your entire past and agree to fight for a cause you didn’t previously care about in a very small amount of time – perhaps only an hour or so. For one, you meet your brother and aside from a mission based in your childhood home which obscurely shows you glimpses of your forgotten past, he tells you all about your parents and you decide to obey him in a beautifully cinematic but slightly unnatural cutscene. However, your goal is obvious the whole way through, your journey is presented in a hugely epic way and even those rushed cutscenes leave you wanting more. Dante himself isn’t immediately likeable with his “heck yeah, found my guns!” cheesy masculine attitude, but I grew to like him very, very quickly as he found purpose and slightly developed as a character. I can’t aptly compare him to the old Dante, but he is a helluva lot more handsome… 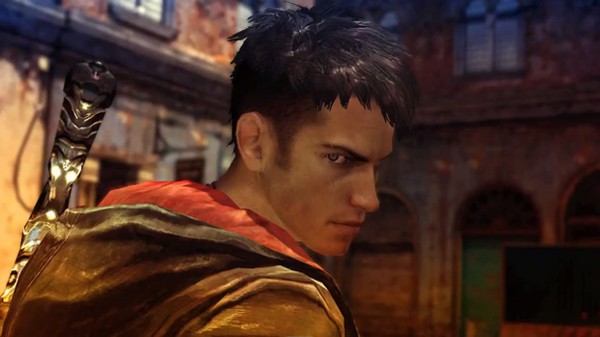 I actually didn’t expect myself to like the new DmC before I tried it, but it turns out it’s one of the few games in my whole life I’ve felt a solid yearning to replay. It would be so hard not to fall in love with the totally out-of-this-world level design, hyper-badass environments, unpredictable, seamless platforming and transfixingly wacky boss-fights. Though I can’t guarantee you’ll like it if you compare it to the original Devil May Cry games (unless you’re okay with playing those, except on acid), but anyone who likes platformers or simply wants a completely aesthetically unique experience must play this!