When I first reviewed TellTale’s The Walking Dead Episode 1, I didn’t realize at the time how good the rest of the series would be.   By the time Episode 2 came out, I could see that the series would not rely on coincidence and love of the source material to get by.    Since the mechanics stays the same throughout Episodes 2-5, I felt like it would be a disservice to the story and world TellTale created to essentially give a plot review each month.   With Episode 5’s release last week, I finally feel able to give my thoughts on the series as a whole.

As stated in my first review, The Walking Dead takes place during the same zombie outbreak as the comics and television series.  It centers on Lee, a man with a complicated past and Clementine, a young girl whose parents are missing.   Other characters have significant arcs that span the entire series, and some are clearly zombie fodder.   As Lee, the decisions you make could have consequences.  Actually, let me say that another way.  The decisions you make as Lee will have consequences.  One of the inescapable truths to The Walking Dead is that you will be faced with choosing the option that sucks less.

For example, you have 3 pieces of food and 10 survivors.  Do you give the food to the children, do you give them to the people that burn more calories scavenging food for the group, or do you keep it to yourself?  Everyone is watching you and will offer support or deny you depending on how they feel you treated them. 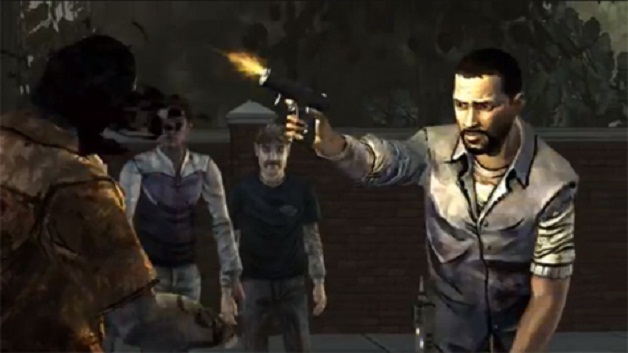 Control-wise you’re playing a point and click adventure with occasional action scenes.  Tension outside of these action scenes is built in conversation by having a countdown timer forcing you to react quickly.  TellTale does a fantastic job of assigning the response options to things you as the player would say in that particular situation, and not just a good/bad/neutral response, ala Mass Effect.  Sometimes though, you need to make a snap decision and just live with it.  I have no problem with the control, and the checkpointing is such that if you happen to die in one of the action scenes, you’re reloaded not too far away.

Aside from the writing, and the moral choices, an often overlooked aspect of The Walking Dead is the superb performance by the voice cast.   Dave Fennoy is incredible as Lee, barking out frantic orders, calming people down or occasionally employing a smooth operator voice that makes Billy Dee Williams sound like a self-conscious teenager.   Fennoy’s talents make Lee a believable guy dealing with his own problems while caring for a little girl.   Melissa Hutchison utilizes her Clementine voice to manipulate the player by giving genuine encouragement when you make a tough call that she agrees with or making the player feel terrible for not putting her safety first.  Together, Fennoy and Hutchison comprise the heart of the game, and when the screws get put to the two of them, their voices will break your heart.

The rest of the voice cast deserve similar accolades, this game would absolutely suffer without them.  Zombie survival roles can easily turn cheesy, and these professionals stay on track with believable performances.   The characters that TellTale created surpass even some characters from the original Walking Dead comic.

TellTale has earned every bit of praise heaped upon the Walking Dead.  For years they have tried different properties, but they all were light hearted.  The Walking Dead gets dark, and its monthly release schedule kept it dark.    By the time you finished an episode, knowing that it would be at least a month before you could walk in Lee’s shoes, having to sit through a coming attraction of the next episode made the anticipation even worse.  Now that the entire series is out and a compilation disc coming out on December 11th, I wonder if the tension will stay there.    However, the way I played means that the Walking Dead has earned my first 10 out of 10.   Telltale has created a fantastic game and I cannot wait to play Season 2.