The Elder Scrolls Online, or How I’ll Lose My Job, Spouse, and Personal Hygiene

Yesterday morning at PAX I was treated to the opportunity to sit down with the PC version of The Elder Scrolls Online and immediately saw my life circling the drain.

Bethesda Softworks and ZeniMax Online Studios have a plan for me.  It’s very clear now that it is my destiny to traverse the vast expanses of all of Tamriel, ridding the evil of monstrous abominations and nasty, nasty people.  It’s a relief really to finally have some direction in my life, and I truly feel like this is a life plan I can get behind 100%.  So it is with great joy that I announce my departure from real life starting in the Spring of 2014 as I undertake this all-consuming quest.

I’m not new to the MMO genre and have been constantly seeking something that could hold my attention the way that World of Warcraft has for the past several years.  The Elder Scrolls: Oblivion was my first foray into the lore and mythology of the Elder Scrolls, and I’ve been obsessed with that world ever since.  But enough about my unwavering love of Bethesda.  You probably want to know more about this game. 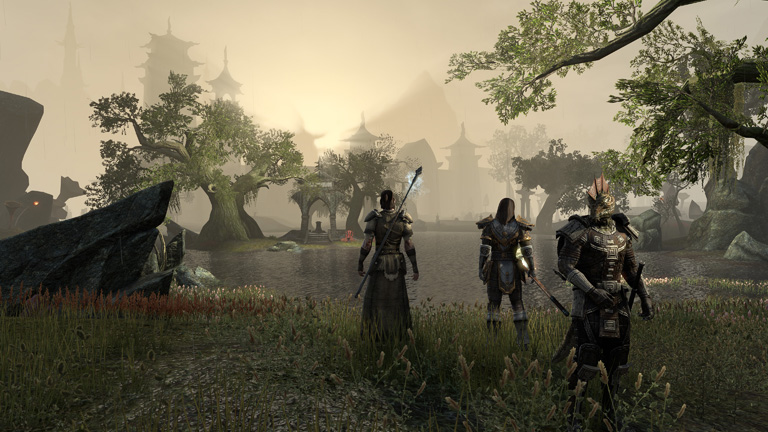 We’re going way back in the story here, about a thousand years before any of the events of Skyrim, when your Dragonborn was just a wee glint in the eyes of the Nine Divines.  This is just before the rise of Tiber Septim, that really famous first emperor of Tamriel guy you’ve heard a lot about and after whom they named all the money in Cyrodiil.  In this time of turmoil (when is it not a time or turmoil), three warring alliances have sprung up, each trying to rule the land and stomp the others out.  As if that weren’t enough, there are dark forces at work too, and those pesky Daedra are back to carry out the whims of Molag Bal.  That wasn’t me getting something caught in my throat. That’s the Daedric prince’s name. I just wanted to make that clear.

Player races and character customization are nothing new and a new player will enter a familiar looking world with heroic quests and an expansive open world environment that allows for leisurely game-play on the player’s own terms.  Yes, you get to go everywhere including Morrowind, Skyrim, and Daggerfall.  Just let that sink in for a moment.  Think about how huge a word Oblivion and Skyrim both were.  Now imagine that multiplied.  Now pick yourself up off the floor from that fainting spell you just had. 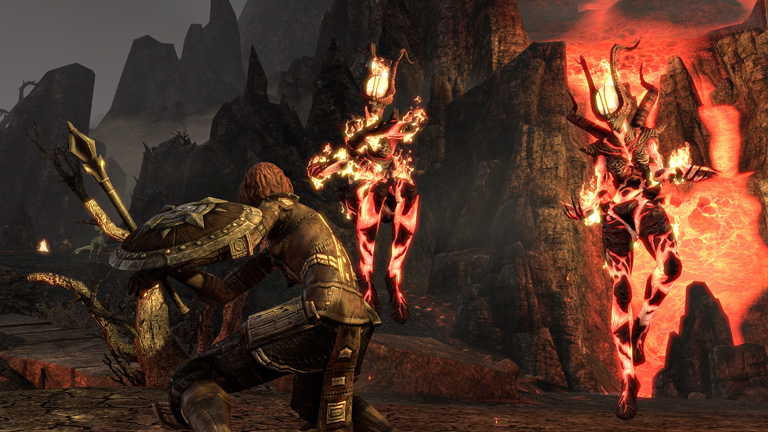 There’s no set way to play the game, so your character will never be locked in to using a specific set of weapons or armor.  Everything is fully customizable, including your character’s looks and combat is real-time and tactical.  You can block, melee, throw powerful spells, and even dodge and roll away so you look like a total bad ass.  The user interface is very unobtrusive, which for me, helped me focus on what was going on.  It doesn’t look like an MMO.  It looks like a single player Elder scrolls title that you just happen to be able to play with thousands upon thousands of other people. PvE and PvP aspects are all in play, as are dungeons and the decisions you make and the influence you exercise over the world will shape your environment for some personalized game-play.

And you won’t have to worry about figuring out what server your friends are on and never being able to play with them.  There’s one gigantic Megaserver where everyone can be one big happy family that tries to kill each other and all the demonic forces that bleed forth from Oblivion.

When I sat down with the game I was impressed with the graphics and the way it handled on PC. The combat is fun, the characters are beautifully realized and the world is a signature Elder Scrolls immersive experience. If I’d had a few more hours I might have begged to be able to sit and play for a while, but I suppose it’s only fair that I take the time to get all my affairs in order in my life before everything changes with the launch of this game.  I’m sure you’ll have to play a few hours at least before getting the full flavor of the game, but the first taste was incredible and definitely left me wanting more (in other news, I’m kind of hungry right now).

The Elder Scrolls Online will lay waste to your productivity in Spring 2014 on PlayStation 4, Xbox One, PC, and Mac.