Well, technically, they’re calling it the Dragon Age Inquisition Inquisitor’s Edition.  But that sounds a little redundant, doesn’t it?  Sort of like ATM machine, or pre-heat.  In any case, Bioware has unveiled the long awaited uber-mega-awesome edition of their upcoming RPG, and hopefully it’s everything you dreamed it would be.  Read on for the details.

The announcement came earlier today from Mark Darrah, Executive Producer of the Dragon Age franchise.  It was Darrah who referred to it as the “Uber Edition” on his twitter feed, but the actual name appears to be the Inquisitor’s Edition.  It costs $169.99, American.  Let me repeat, it costs $169.99.  That’s the bad news.  The good news is that you get a lot of really cool stuff for your hard earned money.  First, check it out with your own eyes below, and let its awesomeness wash over you.  I’ll come back with the details after you’re done gazing upon it. 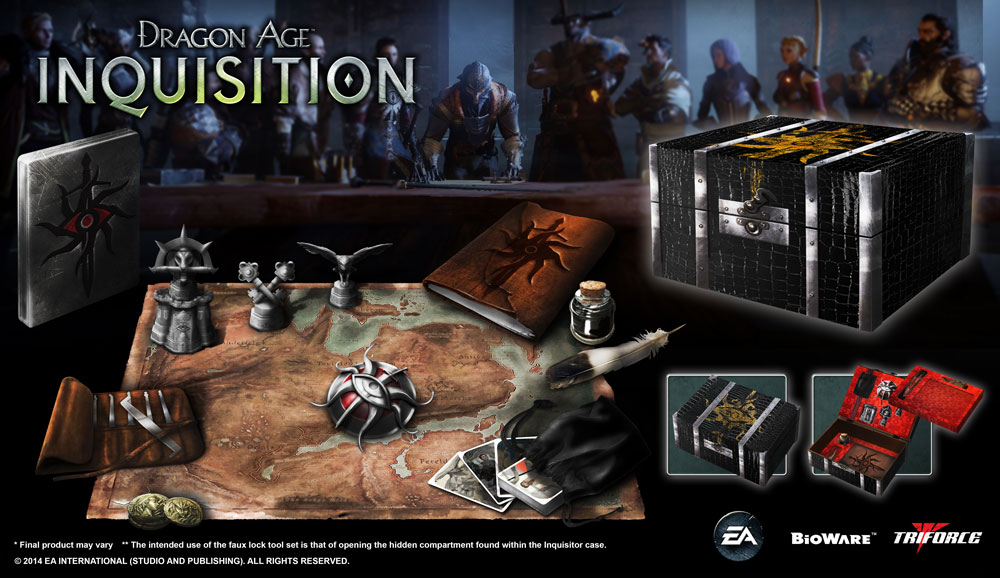 So first of all, the Inquisitor’s Edition comes with the Deluxe version of the game, which includes the following in-game extras.

In addition to all of that fun stuff, the Inquisitor’s Edition comes loaded with everything below.

On its own, the Deluxe Edition wills sell for $69.99, so in reality, you’ll be buying all of the extra goodies for $100, which is actually not a bad price tag for someone who is really, reeeally into Dragon Age.

Now here’s the slightly crappy part.  According to Mark Darrah’s twitter feed, the Inquisitor’s Edition appears to be a Gamestop and EB Games exclusive.  So Best Buy, Amazon, and the rest of the major retailers will not be carrying it.  The game is available for pre-order right now on the American, British, and Canadian Gamestop/EBGames sites, and Mark Darrah assures that it will be rolling out to the other markets in the coming hours.  While there is no PC version of the Inquisitor’s Edition listed on the sites, Darrah also insists that one is on the way.