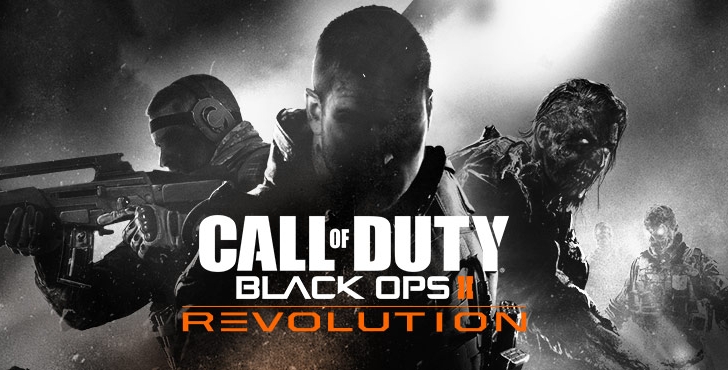 Following hot on the heels of their resounding commercially successful release of Call of Duty: Black Ops II, Activision have provided details on the first of the DLC to be released for the title – Revolution.

Launching on January 30th exclusively on Xbox Live with a release date for other platforms to follow, Revolution includes:

Mark Lamia, Treyarch’s Studio Head, sums up what the studio was looking to achieve with the release of Revolution:

“With Black Ops II, the team set out to challenge assumptions about what fans should expect from Call of Duty, and there’s no exception with Revolution. It starts with the massive amount of content that Revolution offers: four distinct multiplayer maps, an entirely new Zombies map and new Zombies mode, and a new bonus weapon.  But quantity is just the start – it’s the variety of new gameplay options in Revolution that sets it apart, making it our most compelling DLC offering to date, and a must-play experience for Call of Duty fans.”

Revolution sends players to new and unexpected locations around the world with the inclusion of four all new multiplayer maps:

Also included in Revolution is the new zombies map “Die Rise” where players will be transported to the Far East and will attempt to overcome a zombie infestation inside a series of collapsed skyscrapers towering over the remains of an obliterated Chinese city. Players will be able to wield upgradable wonder weaponry, combine new buildable devices to fight the undead, and as a result of a new game mode, “Turned”, players can compete against each other as a zombie.

The Revolution DLC also adds a new multiplayer weapon – the Peacekeeper – this powerful SMG has its own set of weapon challenges for additional XP and is unlocked for all Call of Duty: Black Ops II fans who pick up Revolution.

Revolution releases first exclusively on Xbox Live on January 30th, for a suggested retail price of $20 or 12oo Microsoft Points. The map pack is included in the Call of Duty: Black Ops II DLC Season Pass, which enables fans to purchase 4 DLC map packs and receive the Nuketown Zombies bonus map and exclusive in-game calling card as part of the discounted bundle offered at a suggested retail price of $69.95 or 4000 Microsoft Points.