Assassin’s Creed 3 Review: Nothing is true. Everything is permitted.

It’s here, the long awaited third numbered game in the franchise, which sees a new assassin finally arriving after three Ezio games. Do we finally get our answers to the burning question of the past 4 games?  Did the newest assassin measure up to the lineage of Ezio and Altair? Did Desmond’s story come to a fitting conclusion?  Yes… and no.  It’s a bit of a mixed bag sadly, when there was so much potential.

Usually, with sequels there’s not much to say in terms of gameplay that many fans don’t know.  But unlike the previous entries, Assassin’s Creed 3 (AC3) mixes up the formula enough that you will have to relearn the tricks of the trade.  Unlike previous games, the counter system is no longer tied to the right trigger, but to a well timed press of the B (or circle) button.  Whilst similar in theory to the older system, it requires a greater degree of ability and better honed reactions.  When combined with certain AI’s capabilities and AI numbers, this does lead to a far more harrowing combat experience which isn’t as fluid or as “easy” as the previous games.  This isn’t good or bad objectively, but personally, I much prefer the older system and its fluidity.

Free running and climbing has also been slightly tweaked.  Unlike previous entries, running and climbing is tied to the trigger.  This is supposed to make it easier and cut down on weird jumps and miscues. Unfortunately, during my playthrough I didn’t find this to be the case – I experienced just as many odd little miscues as other entries and I feel a little depth was lost with everything mostly being automated.  Another mechanic that disappointed me was the planned assassination sequences. In fact, I hated them. I want to be able to plan several ways to get a job done, not several ways to get to a cut scene that initiates an irritating chase sequence.  Also irritating were the full synch objectives – just drop them or hide them.  They serve no point most of the time except to restrain the player, sometimes to rather stupid objectives (air assassinating someone when a real assassin would simply use a ledge kill). (In addition, there’s nothing that kills that gaming high more than seeing red x’s appear when you’ve actually successfully completed a mission. I can’t think of any other game where you’re negatively scored and visually penalised when you fail to complete OPTIONAL side missions.) 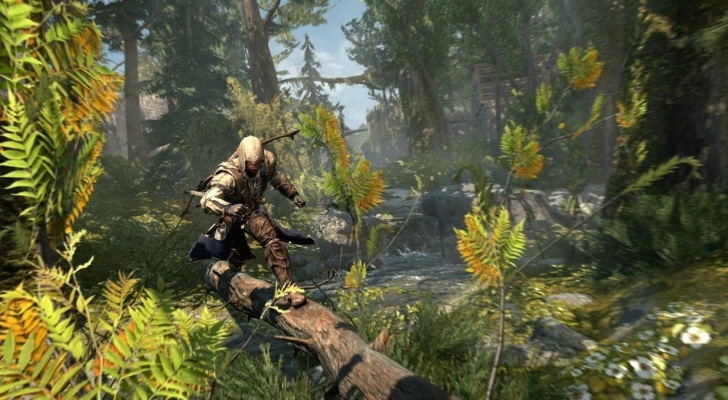 However, I feel these gripes are mostly trivial, especially when, as Connor, you’re running along the branches high in the trees, taking in the gorgeous vista’s of the Frontier around you.  While Boston and New York fail to measure up to Rome, the Frontier easily outclasses anything in an Assassin’s Creed game in terms of visuals. (And whilst not as visually spectacular as the Frontier, the eerie feeling you experience as Haytham when you’re traversing the alleyways of Boston during the night and fog is curling around alley corners is truly something grand.) This, when combined with additions to the arsenal at your disposal, mean the minor quibbles above are evened out.  Adding to the positives in Assassin’s Creed 3 are some of the side missions featured in game – I won’t spoil these fantastic moments but suffice to say, one mission had me screaming “I GET TO DO WHAT?!” before I gleefully waded into what was one of my favourite missions contained in the game.

Sadly, despite glimmers of fantastic writing and storytelling (coupled with some amazing VO performances by main characters) the overarching story of AC3 and the plot as a whole is severely lacking.  I found Connor, our new assassin protagonist, to be quite lacklustre for most of the game.  He had some good moments, most of them late, but it wasn’t enough to really make up for a flat and empty performance throughout the game.  Couple that with some plot inconsistencies and really bad story moments and there isn’t much to be excited about storyline wise in AC3.  This is in stark contrast to the previous AC games penchant for at least having the historical story be intriguing and well executed.  As for the future story as set up by AC3’s ending: it depends on AC4, but I’ll say my eagerness for that game was lessened by some of the twists in this tale.  In many ways I felt the ending was a giant cop out and a way for the storytellers to extract themselves from a complex story they might have lost control of.  It really doesn’t help that this game does tend to get awfully preachy at points, especially in its political commentary in various areas.  I can see it turning off some gamers even if I personally shrugged it off.

But for all that, there is the multiplayer.  There are three different “arenas” essentially within multiplayer: free for all, team objective, and wolfpack. The first two arenas have a variety of modes, while wolfpack is another team objective type of mode, save you play bots instead of other players. In free for all there is death match, wanted, and assassinate.  Most are just variations off the same theme: you hunt a target and another player hunts you. However, the style of that is slightly altered within the modes: deathmatch consists of small maps with no compass, wanted consists of larger maps with a compass and more diverse crowds to blend with, and assassinate is simply a real free for all… you must not only find where a target might be, you must then try and acquire that target before killing it.  It’s hard to explain, and just as hard to be really good at.  But it’s challenging and can be fun. 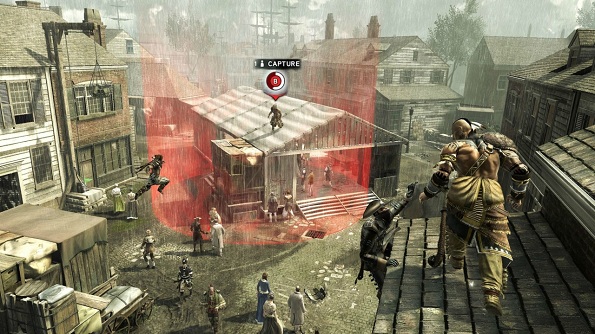 AC3 Multiplayer. It will capture you. See what we did there….

Team objective has three far more varied modes in manhunt, domination and artefact assault.  Manhunt is trading rounds where two teams of players compete against each other to score the most points.  One team hides and seeks to avoid being killed and one team hunts.  You have two rounds and switch and whoever has the most points, wins.  It’s possibly my favourite mode in player verses player.  Domination is simply a mode where there are three zones that teams have to capture to slowly wilt away at a metre at the top of the screen.  Whoever has the most dominance throughout the match wins… of course it could end quicker if you overwhelm the other team and fill the metre.  It’s challenging and requires a lot of team work to really be good.  And to round out the modes is artefact assault.  It’s essentially capture the flag: whoever has the most captures wins.  It’s okay, but the lesser of the three modes to me.

And finally wolfpack… it’s basically a race against the clock and a challenge to get the best possible kills and variation in abilities to maximise score.  It’s a blast with friends just by that alone, but then Ubisoft decided to really spoil us and provide something called the synch-kill.  I had no idea what it was at first, but when my friends and I managed to hit it perfectly, we all had that “Hell yeah!” moment and got probably way too giddy over a multiplayer gimmick.

All in all, there are some wonderful improvements and gigantic steps forward in mechanics and optional additions that make this game incredible.  But, unlike the AC2 trilogy, there are massive pitfalls that leach a lot of the soul from the story and thus the game.  It is a massive negative.  In fairness, it still is insanely fun for the most part, especially with several new additions, so it isn’t a complete disappointment on the level of some games this year.  Does it disappoint?  Sure. I would have loved a more coherent story and satisfying closure.  But I don’t feel the need to take a break from the game to get over that disappointment.  There is still a lot of fun to be had.  I recommend it with a caveat – if you expect a great and coherent story that ties the games together, be prepared to be disappointed.  If you can look past that for the gameplay and for the excellently crafted MP, then it’s worth the purchase.