Jupiter’s Folly – Our thoughts and experiences #2

In the second of our thoughts and experiences with Jupiter’s Folly feature, Joe gives us his opinion on the game. What did he like? What did he find frustrating? Read on to find out.

I should probably get this out of the way right now: I am not a fan of strategy games. Leveling, menus, hit points, planning ahead, thinking in general… these things scare me. I’ve always preferred games that required a more reactionary play style. I’ll take a rocket launcher over a +1 defense against spells any day. Don’t get me wrong, I have nothing against strategy games. It’s just… OK, fine, I’ll admit it. I’m a little embarrassed by my complete lack of ability to play them. So when I accepted the invitation to try out Jupiter’s Folly, it was with a great deal of trepidation.

My first ten minutes spent on the game’s website did not do anything to reassure my doubts. Managing resources? Forming alliances? Games that had the potential to last weeks? These were the selling points? Oh God… I could I feel the beads of sweat already forming. This was going to be bad. Very bad. I almost gave up right then and there. But the image of Tash making a sad puppy dog face flashed before my eyes, so I forced myself to dig in, read the manual, and give it a go. But I wasn’t going to enjoy it.

And I didn’t. Not at first, anyway. What did those numbers mean? Why wasn’t my mine running? What was all that stuff about dice rolls in the instructions? Why was my mine still not running? I didn’t get it. Nothing worked. And the worst part? The game was slow. Not just slow, it was slooooooooow. Simple things like moving men from one node to the next took hours. Card effects didn’t show up. Everything appeared frozen in time. Frankly, it sucked. I hated it. And I went to bed that first night wondering how anyone could possibly enjoy a game where nothing ever happened.

But then something unexpected occurred. My eyes snapped open the following morning, and the first thought that entered my mind was, “I wonder how my mine is doing.” I staggered into the living room, opened my laptop, and checked the game. Things had changed. While I was asleep, my mine had built up a respectable amount of crystal. My security forces had marched into new territory, and secured space for a new mine to be built. And what was this? A rival faction on my border? Alien bugs crawling up out of the ground? The game board wasn’t static after all. It was alive, buzzing with activity. Things had indeed changed, and so had I. I was hooked. 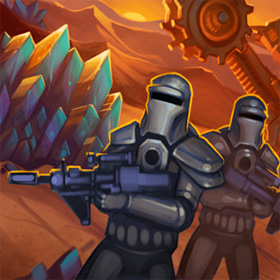 Sadly, my new found enthusiasm for the game did not translate to much success. After a few days, I was a distant third in a group of six. My mines were too few, my security too weak, my territory too small. That freaky spiderweb lair thing that I had decided to ignore early on was pumping out bugs at a disturbing rate, and my pitiful forces could do nothing to stop their rampage. As the end drew near, stuck at work, desperate, unable to check on the progress of the game, I tried to log into the match on my phone. You can imagine how that turned out.

Still, the last day of the match shed light on what might be the game’s greatest strength; the interplay between the competing players. Even though I was out of the running, I found myself in a strategically interesting position. The first and second place players were locked in a very close race to the 5000 point goal. Had I decided to rally all of my forces and launch an attack on one of the players at that moment, I could have changed the outcome of the game. Granted, I’m a totally nice guy, and would never do such a thing. But the fact remains… I could have. And in that moment, Jupiter’s Folly became much more than a board game about mining crystal. It became a game where what was happening in the opponent’s head was just as important as what was happening on the board.

And that is the genius of Jupiter’s Folly. Even if you’re not a strategy game fan, this one grows on you. It draws you into its world gradually. So gradually that you’ll barely notice it happening. But then you’ll find yourself stopped at a red light, wondering if your unit of jetpack equipped Cyber Guard had managed to hold off the alien horde long enough for your doomed mine to make one last shipment. The game exists in the background of your life, coming forward once or twice a day to demand your full attention, before retreating back into the ether once more. If there was such a thing as a casually hardcore strategy game, this would be it. And I can’t wait to give it another try.