I did not purchase Donkey Kong Country Returns when it came out on the Wii. As a devout fan of the original 1994 SNES platformer, the original Donkey Kong Country already had a home on my Wii. While Retro Studios did enough to provide a good paintjob for the upgraded hardware, it came with the shortfall of the Wiimote, and this clumsy interface eventually predicted failure for the homage to one of Rare’s finest creations.

Fast forward, change platforms to the 3DS and with Monster Games’ port of the original, it finally feels as if players can grasp the true homage that Rare deserved and play it with the simple controller buttons that were all that it ever needed.  Donkey Kong runs, jumps, pound the ground or pounds objects to break them, and even blow out fires and scatters dandelion seeds. He has also learned a time-honoured move of the Nintendo-faithful and uses the Barrel Roll to attack enemies and extend jumps. No more shaking the device or wagging a Wiimote like you’re offering your favourite dog a Schmackos, and it feels as if the world is all the better for it.

Independent of the console comparisons, Donkey Kong Country Returns 3D is simply a good game that drills down to the great foundations of a platformer – testing a player’s skill rather than pure reactions, providing worlds that encourage players to play differently, and finding avenues for replayability. Holding onto grass in the early levels feels very much like you are tugging tightly on Earth’s own chest hair, while the favourite “broken mine” levels will tug on your own heartstrings as you dodge the surprises heading your way. Diddy Kong reminds us of the potential of cooperative play, but in single-player mode seems to be little more than an extension of your health quota and a furry parachute.

Donkey Kong Country Returns provides more than one avenue to encourage players to play the game again. The collection of KONG letters is the necessary nostalgic indulgence that legacy gamers deserve, while the addition of other collectibles is a generous nod to the modern platformer’s desire to play again. One thing that can sit uneasy is the fine line between replaying the game and padding the storyline – the main game can be completed in a little under fifteen hours, but these other small collectible missions can either satisfy the achievement hunger or mock you to play the game until it is “complete”. However, it is not without rewards – the inclusion of a new set of stages designed by Monster Games. 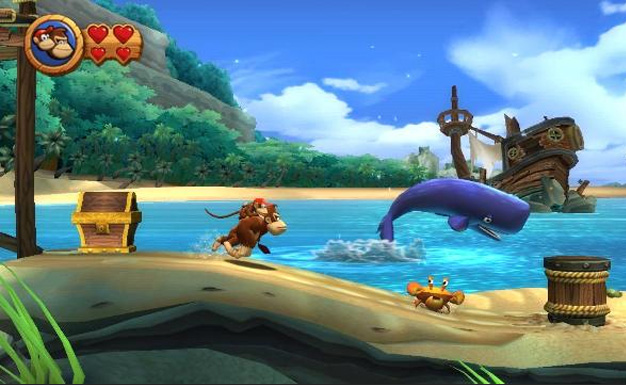 With the addition of new items in Cranky Kong’s giftshop that help you manage your focus on the obstacles rather than your healthbar or items, Monster Games have made this a balanced and enjoyable game for the new initiates, with a substantial amount of challenge for the devotees.

I know that the Nintendo 3DS boasts a wide range of bells and whistles, but I still strongly believe that these simple press-and-play platformers are a portable console’s bread and butter. They provide levels that are time-managed almost to the point of predictability and that have enough challenge that that short engagement is worthwhile. This is important for a portable console, as the very essence of its existence is to encourage non-committal gameplay in a context where finite spare minutes are available. Donkey Kong Country Returns 3D caters to this ideal more than adequately, and reminds us that there will always be bulkier RPGs and strategy games that will be successful for the Nintendo 3DS, but a portable gaming console that does not take advantage of that one defining quality is a console that is going to stay at home.

And, to be honest, there are more than enough of those on the market.

Donkey Kong Country Returns 3D scores an 8 out of 10.