Full disclosure – I have never played a JRPG before. In fact, I know next to nothing about the whole JRPG verse. So, when the opportunity arose to review Tales of Xillia 2, naturally I questioned my ability to provide a well-informed assessment of the latest game in the series. Given my lack of knowledge on the history of this game, my review will not focus on the strength of the story or the improvements on gameplay from the previous instalments. Instead, this review is structured from a newcomers perspective, and provides a general summary of how the game looks, feels and plays from the perspective of a new player.

Let’s start with the basics – the graphics and soundtrack. The visuals in Tales of Xillia 2 are crisp and vibrant, with the multitude of colours used brightening up the sometimes mundane environments. As you start levelling your character Ludger Kresnik, you have access to more and more abilities which, when used on your enemies, results in a beautiful cacophony of bright colours and vibrant hues. Sometimes, during more complicated battles at higher levels, the use of colours and text on the screen when battling can create a disfunctionally hectic feeling, but the game does a good job of slowly inviting players to experience the nuances of the game, and there was never a point where I felt completely overwhelmed. I expect that anyone who’s familiar with the Tales series will know exactly what to expect from a visual perspective, and this is likewise true with the soundtrack.

As a complete newbie to the series, I was a little surprised at the ecclectically diverse usage of songs as part of the game. In some areas, the music used was best described as ‘weird, looping, creepy elevator music’ whilst in others the music was hardcore thrash metal. With each new area unlock, I could never tell with certainty what sort of music was going to accompany my traversal of the area, and I’ll admit that I found this surprisingly enjoyable. I’m going to chalk this up to another case of ‘that’s just how JRPG’s are’, but whilst it sounds as though such an odd combination of music would create a discordant experience, I found it fun and amusing.

Moving on to the plot. Usually in reviews I write, I summarise the plot of the game I’m reviewing. Tales of Xillia 2 is an exception to this, because, to be completely honest, for the majority of my time with Tales of Xillia 2, I had absolutely no clue what was going on from a story perspective. After speaking with several people ‘in the know’ regarding the Tales series – those who have had experience with it and are long-time fans – I’ve discovered this is not unexpected. There’s a heck of a lot of lore within this series, and it’s ludicrous to expect a newbie to the game to understand the interrelationships between characters and the history of the game verse as soon as they pick up the controller and begin playing. Despite this, the starting level and the following tutorials provide enough help and assistance to guide newcomers to the series without overstating it for those already aware of what is going on, and what will be required of the player. 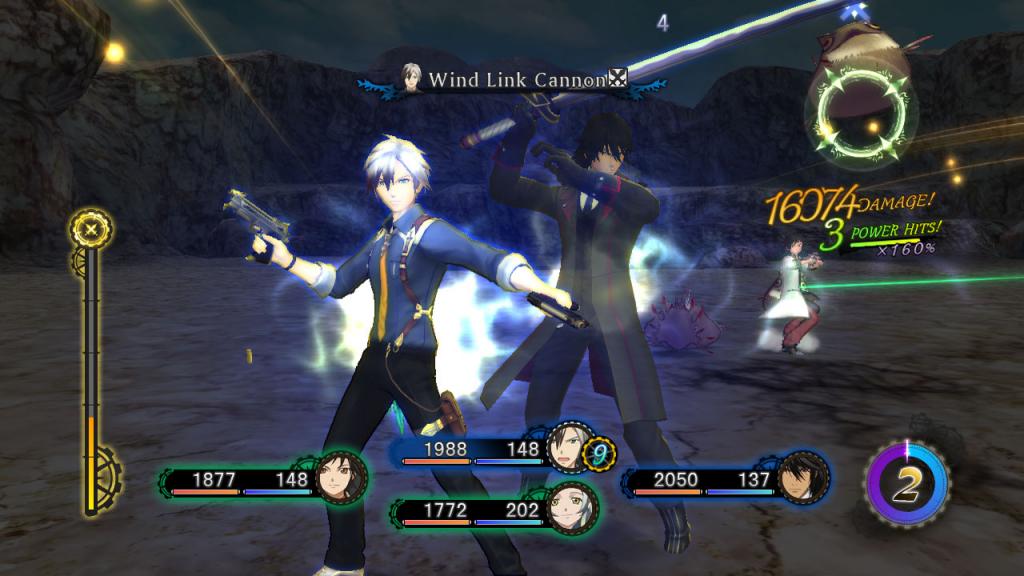 As Ludger, from a gameplay and story perspective, Tales of Xillia 2 provides a great many ways for you to both familiarise yourself with, and become immersed in, the game world. As you traverse through the various areas within Tales of Xillia 2, you have the option not only to speak with your party members, but also with NPC’s within the game world. Each NPC that has something to say to you will have a speech bubble with an emoticon above their head. Once you speak with an NPC, that speech bubble’s emoticon will appear faded so you know you have spoken to them. This is a small thing, but something I appreciated, given my penchant to speak to absolutely everyone I come across.

The gameplay itself is relatively straightforward – you progress through areas, fighting enemies in individual battle arena’s, unlocking more areas as you move through the story. As you progress, you meet new people and new characters join your party, allowing you access to their fighting abilities during battles against enemies. The game itself features two different screens – the field map and the battle arena. The field map is, in essence, the 3D representation of the game world and includes all the individual areas you traverse on foot. The battle arena is accessed whenever you engage enemies in combat, and it is here that you will try out your new abilities and perform moves, counter moves and special moves with your chosen skills and weapons. In the battle arena screens, you have the ability to fight by yourself or link with your active party members to execute a variety of attacks that are unavailable to you if you are only controlling yourself. Characters that aren’t controlled directly by you are controlled by the AI who takes its cues from instructions set by the player prior to the battle. The game slowly steps you through this process, so its easy on newcomers, and as a new entrant to the series I appreciated this gradual introduction to all the different modes and skills available in the game.

Dialogue wise, the game has solid scripting and writing, and whilst Tales of Xillia 2 doesn’t offer much in the way of varied confrontations, there are choices to be made. In some areas, the game will prompt you to choose which dialogue choice you feel best represents the way you want to play Ludger, and will prompt you to press either the L1 or R1 button. There doesn’t appear to be a time limit on these choices, and they don’t feel as though either choice makes too much of a difference to the story, but I appreciated the ability to choose a dialogue option every now and then. In addition to prompting you for dialogue choices, as Ludger, you will also be able to choose which friends you take with you into battle. This choice will allow you to build an affinity with specific characters, learning their moves and their special skills, and this relationship you build with them will ultimately result in new conversation options and even new items. This lends Tales of Xillia 2 a high level of replayability which will likely have both fans of the series and newcomers alike eager to try out different characters and skill combinations. 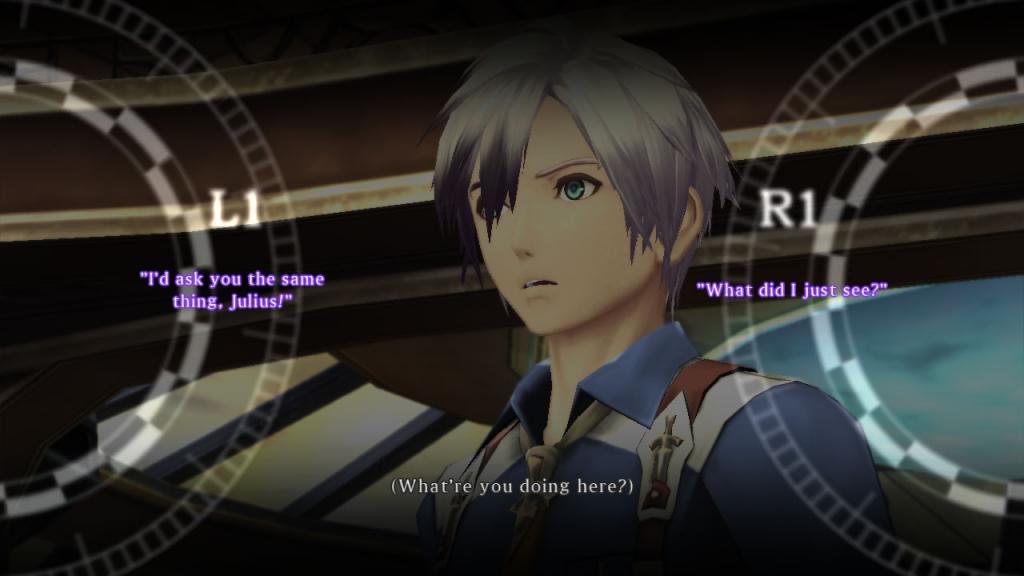 Relationships and discussions between characters are explored using animated character portraits and full voice acting during your traversal of the field areas of the game. These simplistic, yet nuanuced representations of party banter really add to the depth of the game. I enjoyed getting to know my team-mates and friends during these interjections, and found their amusing discussions strangely endearing.

Questing wise, there’s an absolute plethora of main quests and side quests that will keep you very, very busy if you choose to accept them all. The vanilla side quests are slightly disappointing when compared to their more enjoyable party-member centric quests, as many of the side quests are simple fetch quests without any interesting oomph other than the fact they give you money. Thankfully, you aren’t required to complete all of the side quests, and can instead spend your time completing the much richer character-specific quests. As a seasoned RPGer, these are the kinds of quests I love, and the fact that Tales of Xillia 2 lets you learn more about your teammates through the completion of these quests is the icing on the cake (or the tomato on the omelette, as it were). The primary quest line stands separate to these teammate specific quests and can be tackled alongside or outside these quests.

In summary, what you draw from Tales of Xillia 2 will depend on what you want to get out of it – the game can be as complicated or as easy as you want. If you’re only interested in completing the bare minimum main quests and have no desire to devote time and energy into learning the fighting combinations and nuanced gameplay, or of bonding with your teammates and learning more about them, you’ll have a very straightforward, simple playthrough. In this instance, your playthrough will be a simplistic paint by the numbers, progress through the story clearing enemies out of areas experience.

If, on the other hand, you dedicate the time to learn the fighting combinations, buffs, weapons and skills, levelling up your player character and party friends as you go, you’ll find a nuanced, deep world with plenty to learn and explore. The characters and world are interesting and well-realised, the gameplay is simple to learn yet offers a challenge for those used to the genre, and the dialogue and soundtrack are impishly delightful. During my time with Tales of Xillia 2, I found I really enjoyed myself, which was a surprise given my lack of exposure to this genre. If you’re a fan of the Tales series, you’ll likely have already played and loved this installment. If you’re not, but you enjoy RPG’s and quirky exploration-based games, I’d recommend you give Tales of Xillia 2 a try. It just might surprise you, as it did me.