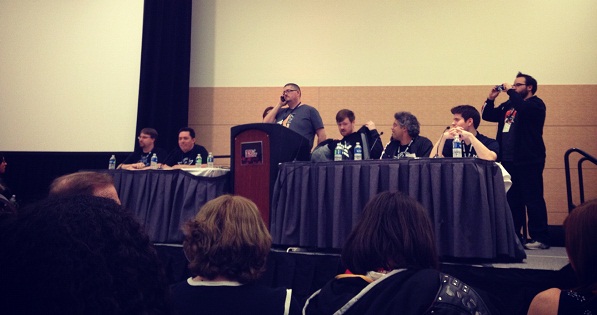 Bioware had a big presence this year at PAX East despite the fact they had no huge announcements and no mega releases upcoming.  Aside from a few smaller announcements and large panels, the company existed mainly at PAX to be a kind of party central for the con-goers.  The casual, fun atmosphere was probably the best PR they could have possibly exhibited.

It’s no secret that Bioware has been taking a bit of flack recently for the ending of Mass Effect 3, which got so many fans riled up some of them even took to ridiculous legal action.  Though it’s probable that Bioware had planned to create a fun and intimate atmosphere at PAX all along, it surely didn’t hurt that it came right on the tail of their most recent announcement.  An Extended Cut ending dlc for Mass Effect 3 will be released sometime this summer, and the “Bioware Base” as it was called opened its doors and let the deluge of fans in for some informal meet and greets, mini-panels, demos, cosplay contests and giveaways.

Among the festivities was a Dragon Age panel that was so packed to capacity that if I’d even gotten into it, it would have been a fire hazard (and another slightly less crowded one regarding the Dawn of the Seeker Dragon Age anime), and a Mass Effect 3 panel that I was sure to jump in line for nearly two hours before the doors open.

A crowd of 1,200 fans crammed into the Manticore theater to hear what the developers had to say about Mass Effect 3.  On the panel were writers Patrick Weekes and John Dombrow,  QA team lead Reid Buckmaster, Bioware Montreal designer Alexandre Elsayed and Producer Mike Gamble.  The panel was moderated by Community Manager Chris Priestly.  I have to admit I was nervous for the guys sitting up front, the Bioware folks who were brave enough to weather the shit storm of angry fans to address them personally.   Mike Gamble even held up a replica of a weapon from Mass Effect 3 and joked “we did bring protection.”  But the anger never came, and the team encouraged continued feedback and constructive criticism from the fans.

Before delving into the single player discussions, there was talk about the new Resurgence multiplayer dlc pack for Mass Effect 3 that will be released tomorrow for free (video below).  In the pack, the player will get to play as as an Asari Justicar Adept, a Batarian Soldier or Sentinel, and even a Geth Infiltrator or Engineer.  There’s also the possibility to play a Krogan as the vanguard class, and I’m not sure if you, dear reader know anything about Krogan or vanguards but the combination basically equals a freight train of BIG charging at your enemies.

The discussion then turned to the single player mode, eliciting some laughs and even a few knowing groans from both the crowd and the developers, who wanted to make it clear that they had been listening to the fans.  Mike Gamble had this to say:

The extended cut is not a new ending or a re-imagining of the ending, but we thought of a number of things that we made sure we wanted to do with it.  We’re currently building it right now and our cinematics team lead by Parrish Ley is on it as we speak.  The writers, including [Weekes and Dombrow] at the end of the table are heavily involved and it’s coming together.  We wanted to clarify a number of things for the players.  We wanted to make sure that we actually answered the questions…We want to give some more closure around some of the questions you have, fill in some of the unknowns and in general we really wanted to give the players a sense of personalization with the endings.  Many people mentioned that some of the choices in the game are not necessarily reflected in the ending scenes  We’re definitely going to focus on things like that.  We want to make sure that when you see the ending of Mass Effect, you now have the information in the context and feel satisfied. …. It’s more than just a few cinematic scenes.  It’s more than just a fresh coat of paint.  It is definitely a considerable amount and we’re happy to be doing it.

They wouldn’t comment further on the ending dlc except when asked “why wasn’t it included in the game to begin with?” to which they simply answered that they weren’t aware there was such a desire for it until after the release of the game, and after getting the fan feedback.

This weekend was a chance for Bioware to be the game company that their fans have come to love over the years.  No doubt many of the fans there were among the angry internet mob, and I’m sure the Bioware Base was flooded with questions and accusations at some points during the weekend, but in retrospect there sure were a lot of Mass Effect t-shirts and costumes hanging out at PAX East this year, so I don’t think Bioware has to worry about losing flocks of fans any time soon.

Check out the multiplayer DLC trailer below.