There’s no such thing as a casual strategy game fan.  You either love them, or you’re baffled by them.  For the longest time, I was firmly entrenched in the latter category.  I didn’t get the appeal of strategy games.  The resource managment, the turn based combat, the menus on top of menus on top of menus, I just didn’t get it.  How could staring at timers be fun?  Recently, however, I have begun to see the error of my ways.  With the help of some very patient (and very brave) friends, I’ve begun to realize that there is much fun to be had in strategy games, as long as you take it slowly.  A great place to start is a game by the name of Iron Grip: Marauders.  Read on to learn more about this game, and why now is the perfect time to give it a try.

Developed by ISOTX, a self described “small group of fanatic gamers,” Iron Grip: Marauders is a free, web based strategy game which is at once instantly playable and incredibly deep.  Set in the larger Iron Grip universe, Marauders tells the story of a war fought in the country of Kathos.  You play as one of the titular Marauders; a powerful individual, in command of a private army for hire.  In your heavily armored airship, you travel from city to city, in search of paying jobs.  Half of the game is spent expanding and improving your army through the collection of resources.  These resources can be used to train new troops, contruct new war machines, and research experimental technology.  The menu screens from which you build your forces, while initially intimidating to beginners, become quite easy to navigate once you know your way around.  The other major component of the game are the battles, which are fought in a turn based system on a three dimensional battlefield.  The battles are rendered in the browser window, and feature some pretty impressive graphics for a free web game.  At the beginning of every battle, you’ll be asked to outfit your army, and place them onto the battlefield.  Taking turns with your computer opponent, you maneuver and exchange fire until one army has been obliterated.  Strategy, obviously, is key.  Each victory in the battlefield yields rewards, which allows you to strengthen your forces, which in turn lets you take on bigger and badder adverseries.  There are also player vs. player battles, for when you tire of the game’s story and feel like laying the turn based smackdown on a flesh and blood opponent. 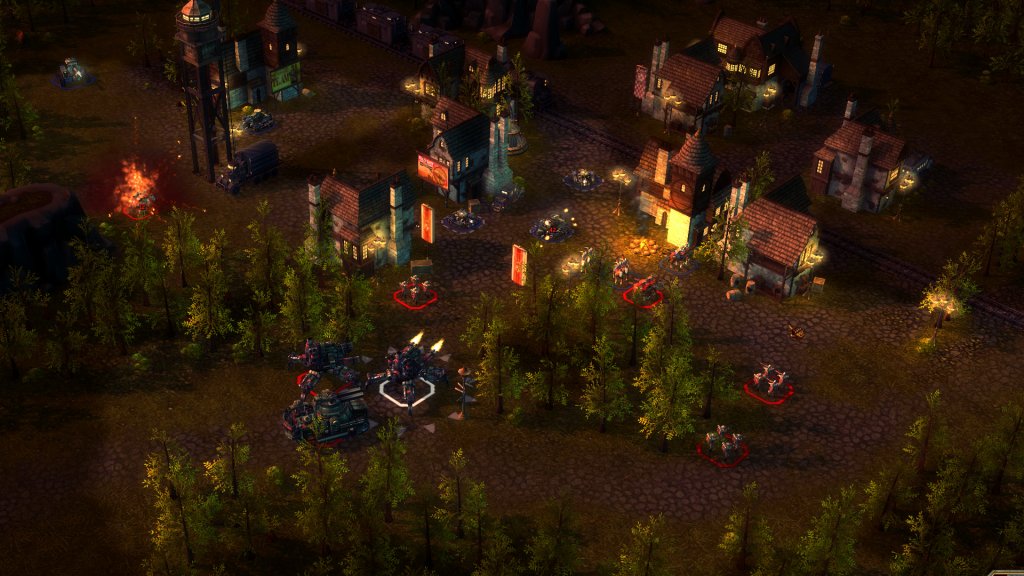 One of the game’s strengths is its eye catching visual style.  The country of Kathos strongly resembles inter-war period Europe, but with an evocative dieselpunk twist.  Giant tanks and mechs mingle with gaslight street lamps and smoke filled pubs.  While many of the characters and environments are portrayed with still images, the artwork is beautiful nonetheless.  I found myself more than once just sitting back and letting my eyes take in the incredible detail of every drawing.  It’s clear that ISOTX put a lot of effort into establishing a specific mood for the game through the artwork, and it really helps draw the player into the game’s world and story.

There are some drawbacks to the game’s free-to-play setup.  As with most free online games, you’re given a meter that depletes every time you perform an action in the game.  When the meter is empty, you can’t progress any further in the game, and you must wait for it to refill.  While the action meter in Iron Grip: Marauders refills at one point per hour, you have the option of purchasing more actions.  And that’s how they get your money.  Players who don’t want to wait for more action points or resources can purchase them through the in-game market.  It’s not really a big deal, I suppose.  I mean… the studio has to earn money somehow, right?  The problem comes when you screw something up early on, like… oh, I don’t know… engaging a much stronger foe and losing half of your army.  Not that I did that, or anything.  Noooooo… but if I did, I might’ve wound up with no points to rebuild my forces for nearly a day.

Earlier in this article, I mentioned that this might be the perfect time to give Iron Grip: Marauders a try, and here’s why.  ISOTX recently rolled out an impressive expansion to the game which opens up new territory and new game options.  Set in the snomy mountains of Atelia, the expansion offers an atmosphere much different from the rest of the game world.  The resident Atelian Nomads fight with huge mammoth-like creatures instead of tanks, and tweaked rules of engagement add new wrinkles to the tactics of battle.  The expansion also includes new assault missions, automated battles which typically last around ten minutes, and are great for quick XP and resource grabs.  You will also have access to a handful of new player vs. player maps.  You can watch a trailer for the Atelian expansion below.

Keep in mind that all of this sweet straterific goodness is free.  As long as you can work within the restrictions of the game’s free play system, or are willing to pay if you can’t, there is a lot of fun to be had.  If you’re a strategy game fan looking for a fun new universe to explore, or if you’ve never tried a strategy game but have been curious to try the genre, I recommend giving Iron Grip: Marauders a try.