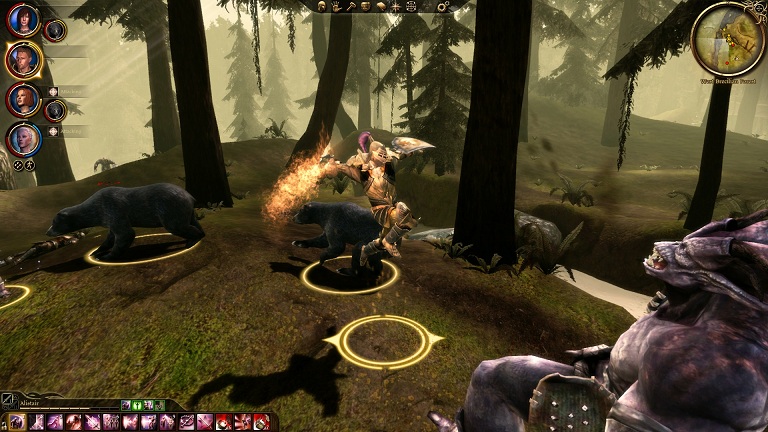 WARNING – The Nexus is a site that caters to many modding tastes, therefore there will be content that is NOT SUITABLE FOR WORK that includes nudity and depictions of graphic sexual content. In order to view such content, you must be a member of the site and registration is free, but you have been warned. Now that I have your attention…

As many know, Dragon Age: Origins is my favourite game. The varied and wonderfully vibrant characters mixed with the amount of choices that create a rich emotional world draws me in, and I first bought it on the Xbox 360. After a few months I started researching various things about the game, mainly because of some bugs and issues I had with some aspects of it, and I discovered the already rich modding world that existed. There was no easy how to guide on where to start. I trudged through so many mods and hours, tinkering to get them to work without really knowing what I was doing. I eventually got it done, but it wasn’t easy.   It isn’t that it is extremely difficult, just something that isn’t as intuitive as some games mods have become. Hopefully this article helps some you newer or prospective PC players wishing to experience Dragon Age in ways that the vanilla game didn’t offer (like this armor). 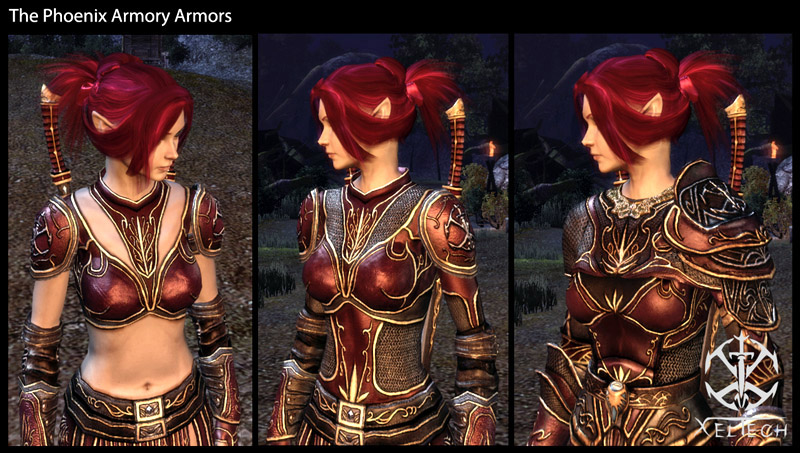 First, some basic notes: There are several different mods that can cover the same aspect of a game. Some might be compatible, but many are not. I will be using the list of mods I personally use and the mods I am using have shown no compatibility issues with each other. However, this doesn’t mean there aren’t better mods out there I am unaware of or that choosing another mod is necessarily wrong. I have chosen these due to several compatibility issues that other similar mods such as many Zevran fixes that do not work with Equal Love or Dialogue Tweaks since they touch the same files. There are also two places I use the most for mods – Dragon Age Nexus (part of a mod nexus for many games) and the project function offered within the Bioware Social Network. However, this article will only use links from the Nexus. Most mods are there anyway.

There are a few ways to go about modding Dragon Age: through copy and pasting the files after downloading and extracting, extracting straight to the folder, or using the mod manager. I will mostly use the manager method, but I will discuss the copy and paste method just in case you wish to see where the files are stored and how to manually add and delete them with relative ease.

On to the modding! Here is a simple list to begin with, including various tweaks, fixes, and additions:

Dialogue Tweaks (offering several fixes to dialogues as well as adding some options that did not exist before): http://dragonage.nexusmods.com/mods/336

The Winter Forge (a camp addition allowing the creation of armour and weapons): http://dragonage.nexusmods.com/mods/122

Skip the Fade (skips the Circle fade portion while still giving codex, experience, and attribute points to the player): http://dragonage.nexusmods.com/mods/816

Lock Bash (allows for non rogue characters to break chests at the possible expense of lesser items held within… also auto initiates lock picking if a follower is capable): http://dragonage.nexusmods.com/mods/301

Extra Dog Slot (forces your Mabari hound into your summon slot to allow for three other characters to still be chosen to accompany the Warden. Banter can still be triggered with the hound): http://dragonage.nexusmods.com/mods/664

And for those wishing for some more adult fun… NOT SAFE FOR WORK LINKS! Dragon Age is a mature rated game and some of these mods are actually not only quite fun, but better for the immersion in terms of ridding Thedas of those horrid, ugly things they call underwear.

Natural Bodies All in One (goodbye clothes!): http://dragonage.nexusmods.com/mods/554

Morrigan’s Loose Robes (okay… I admit, I get a kick out of seeing Morrigan braless and “free” if I don’t have her in one of the above robes :p): http://dragonage.nexusmods.com/mods/33

Lady of the Forest Nude (always seemed weird such a being would conveniently be covered up): http://dragonage.nexusmods.com/mods/484

Nude Succubus (I mean really… a demon of temptation and desire that isn’t topless?! *scoffs in horror*): http://dragonage.nexusmods.com/mods/2650

The Pearl Redone (like the above, but with the brothel scenes. Some are quite hilarious!): http://dragonage.nexusmods.com/mods/863

More Options at the Pearl (adds a new character to interact with to give various and mostly continuity breaking scenes. Some are funny though): http://dragonage.nexusmods.com/mods/1176

Your Personal Castle and Harem (I use it for the vendor, though that is obsolete with certain cheat functions enabled with the Winter Forge that can grant you gold easily): http://dragonage.nexusmods.com/mods/469

Rendezvous at the Tavern (allows for a scene with a romanced character at the tavern in Denerim): http://dragonage.nexusmods.com/mods/1587

Last Night with Morrigan (changes the vanilla scene to a more graphic one): http://dragonage.nexusmods.com/mods/1142

Now, before you get started downloading these files, create a folder dedicated to holding the soon to be unzipped files. Unlike the mod manager for the Elder Scrolls, the DAMM does not have the direct download capability; you have to unzip the file first. There isn’t any best place for this, just one you will personally remember. I use a DA mod folder in the default downloads folder myself.

Once that is done, download the mod manager first and run the .exe. It should find the correct path for the Dragon Age files, usually in my documents. Now, download the mods you wish to use. Many should come in a zip file. Right click the file, find the program like 7zip then click the “extract file” option. Here, it will allow you to choose a folder to extract to. Choose the common folder you created for these mods. Now, here is the trickiest part of the whole process: finding out if you have to use the manager or place the files directly into the override folder. If there is a little icon that resembles the Dragon Age desktop Icon, then you have to drag and drop the file into the manager. This will then start the process of installing the mod to the correct folders automatically. Once complete, it will simply show that the mod has been installed and placed in the load list in the upper left pane. 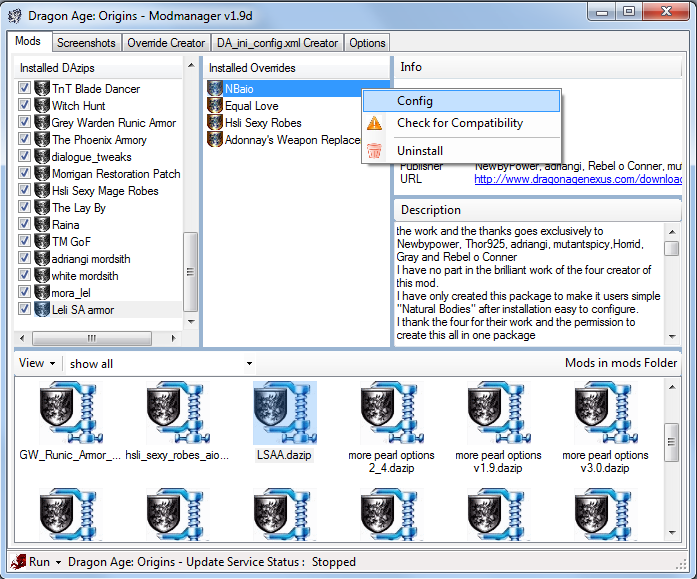 Also of note, most DAMM files will not need to be configured; however, Natural Bodies All in One is a nude mod featuring several body variations. Once you drag and drop the folder into the mod manager then install it, you will need to right click the NBAIO file in the middle pane and choose configure. There it will give you all the options available for each race and sex. It’s simply a matter of clicking each and choosing what you personally prefer.

The process is actually quite simple once you get used to it. HOWEVER, if there is no such icon then it will be required to manually place the files in the override folder. It sounds daunting, but it really isn’t. Open up the mydocuments/Bioware/dragonage/packages/core/override and then move or paste the files into it. Of course, if you directly extract to the override folder, any such file that doesn’t require the manager will install just as fine that way.

Small little run down of both… we’ll use the Sacred Ashes Armour mod for an example using both the DAMM and the copy/paste method:

Click the link provided above, then click the files tab. There should be 4 links in that tab for the main file, an update, and two optional files. First, download the main file. Now, right click and choose the zip utility you have in the drop down window and choose extract file to the common mod folder. There will now be one file in there called LSAA with the DA desktop like icon. Open the mod manager, then drag this file into the bottom portion of the window and drop it. It will ask if you wish to add the file and click yes. From there, right click the icon now in the lower portion of the window and choose install. Simply click yes if it asks if you want to install and then check the upper left load order window to verify that it installed and is checked. 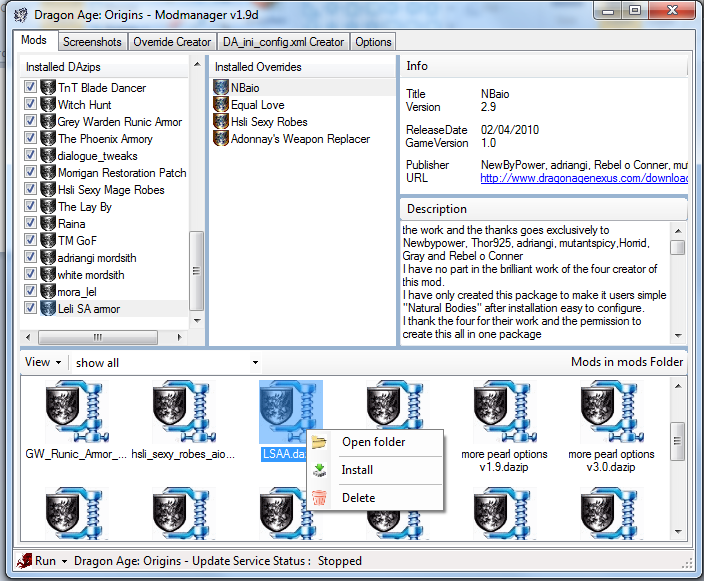 That means the mod is now ready to go. If you choose, you can then download the update and the two optional files.

So, go ahead and download those files, then right click and choose extract file for each zipped file. Now, you can either choose to directly extract the file into mydocuments/Bioware/dragonage/packages/core/override or extract the file to the common mod folder then copy/paste it from that folder into the override folder. It’s personal preference if you want to limit duplicate files or keep backups just in the mod folder. Either will result in a working mod. And viola… you now have a piece of modded armour in the game!

Now, with some mods you will have to choose between certain variations of the mod.   The Better Sex Scene mod you will have to choose which version you wish to use and only extract that. For instance, on the file tab there are three main files and three optional files. If you are using dialogue tweaks (linked above) then you want to download one of the three optional files. The choices are Medium, Mild, and Zesty.   The difference is the level of graphic sexual content with medium being tamer than the obviously more raunchy Zesty. Choose your preferred level of content then download and extract that file. You cannot run both a mild and a zesty mod at the same time, for instance. However, you can choose all three of the miscellaneous options and have them installed simultaneously.

Now, with all that said, I should note that none of this is officially from BioWare and they are not responsible if your game crashes. Modders do so at your own risk, though you shouldn’t have any trouble with the above mentioned files.

May your first foray into the modding world be a fun and much gentler ride than my haphazard feet first leap into the deep end! Enjoy hunting for new and different mods. There are a plethora of them out there! This was just the tip…