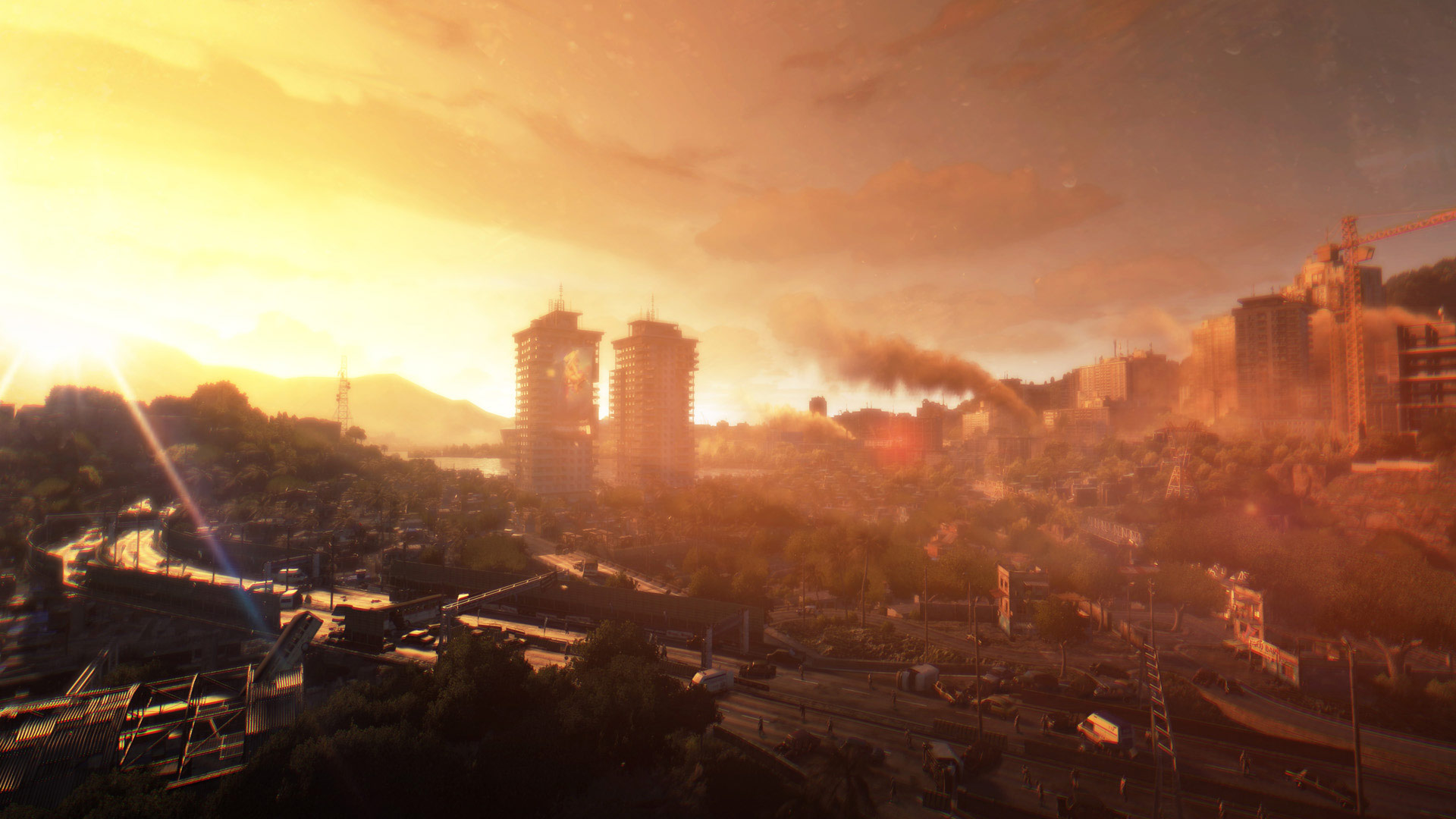 On a sunny saturday at EB Expo, I stopped by the Warner Bros booth to check out the latest game from Techland. After an introductory video that showed how to play, I was thrown into the playable demo of Dying Light, side-by-side with zombies, and a few horsemen past the apocalypse. It was almost a leisurely walk, but if you’ve kept up with this title, you’d know that as day falls to night, the pace (as well as the danger would pick up). As soon as the rain began, the skies began to darken, and if not for a last minute rescue, I’d have surely met my fate. My rescue came in the guise of Michal Napora, Community Manager for Techland. Yes, the demo ended, and I turned my attention to Michal, and the questions I had about Dying Light.

People probably know Techland more from Call of Juarez and Dead Island, while Dying Light is your new game.

The big thing is that it’s obviously a zombie game, but what do you call the zombies in your game?

Michal: We don’t actually call them zombies; we call them the Infected. That’s as far as I can go, but that gives you an idea of the spin on the story that we want to take.

And one of the main things with zombies is that there’s the George Romero type, and the 28 Days Later type, yet you’ve actually got both.

Michal: Yeah, pretty much. We want to keep everybody happy – we don’t want to discriminate against zombies, they’ve got feelings too! For us, especially when you’re making a game, those two types of zombies give different challenges. When you see those slow ones coming through you feel like they’re fresh meat, but then you want the thrill of the fast, paced chase. I think it’s a nice way of balancing action and fun at the same time.

One of the big differences with Dead Island as far as the mechanics go, is that Dying Light is really strong with its free-running and parkour aspects. Can you tell me a bit about that?

Michal: We call it the Natural Movement System. Have you ever played Mirror’s Edge?

Michal: Me too. I love that game and a lot of the guys at Techland, they loved it too. When I played it for the first time, I thought “This is it. This is the next level, this is the future, this is the revolution“. Six years later it’s still the same. That’s why we wanted to bring in that element in and open up the world. It’s no longer just a 360-degree view, but more like you’re in a sphere where you can move along the X, Y, and Z axis. I think players will have fun with it, especially with the freedom that it gives you to climb, jump, and move around the environment. When I play Dying Light, then go back to an FPS – and I do like FPSs too – you notice the difference. You’ll be on the ground shooting, then you’ll think “I want to get out of this situation. I want to jump on that ledge and get out” but you can’t. 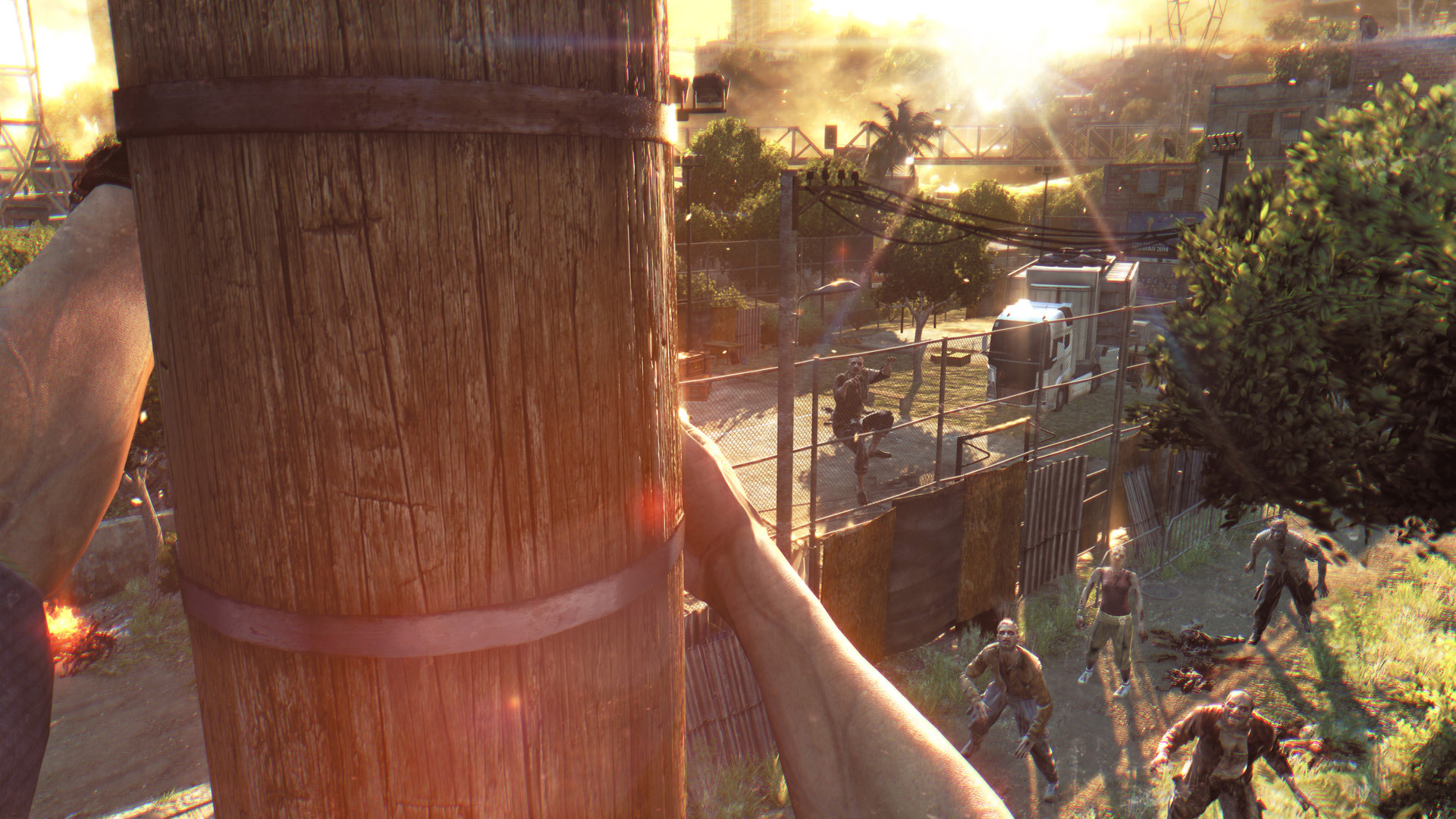 And obviously that’s going to be a challenge for players that aren’t used to thinking three-dimensionally in that sense. How would you instruct them or guide them towards looking above their heads while they’re playing?

Michal: It might take you a while to get your head around it which is why we decided to make the parkour as easy as possible, and it’s just the one button. After a while you get into a rhythm, you start looking at ledges and start looking at what’s ahead of you. Once you get used to it, it’s just so natural and easy, you’ll be flying.

And the setting itself is a take on South America cities if I’m correct?

Michal: Not really. Our inspiration comes from a lot of the Middle Eastern countries, say Morrocco and Istanbul. A lot of people have said that it looks like South America, just through the slums and such, but once you see more of the stages, you’ll get a different feel. For us, this city Hiran is a fictional city and it’s just a mish-mash of all the different inspirational places we’ve been to.

What sort of variety would you see in the environment there as far as the topography goes?

Michal: There’s a lot of different places. You’ve seen the slums – the slums, like any slums, are pretty slummy. We also have an old town square, where it reminds you of European towns, with a bit of Istanbul as well. There’s also places where you’ll be on cranes and giant rooftops, and heaps of variety.

So as far as the three-dimensional thinking goes, it’s not just a case of “I can go on the ground or I can go on the roof“, but you can actually go quite high up?

Michal: You can go quite high up, and jump in between buildings as well, since obviously the distance allows you to. We’re also introducing a grappling hook mechanic which will let you hook onto rooftops and pull yourself up. It’s pretty cool.

It’s singleplayer and multiplayer. The multiplayer has been described as asynchronous – how will that work?

Michal: With the multiplayer there’s two types. First type is your standard 4-player co-op, so if you want to join my game with two other friends, you can all hop into my world, do missions together, and have challenges like who can kill the most zombies in the next minute, or who can get from A to B fastest – that’s the co-op campaign. We also have Be The Zombie mode. That’s the one that we’re really excited about, which is where a human can actually become a zombie. Those single player guys or even those playing four-player co-op? Once it goes from day to night in their world, they’re open to being invaded. That person playing a zombie can jump into another world and those players will get a message that they’re being invaded, and the hunt begins.

There was a rumour that feature would be a pre-order exclusive. Is that true?

Michal: For the time being, yes. We’re thinking of making it available later on, but we wanted to reward people that put faith in us. We’ve got a lot of preorders coming through and we wanted to give them something special, so that was our gift to them – just “here you go, thank you so much for all your faith.” 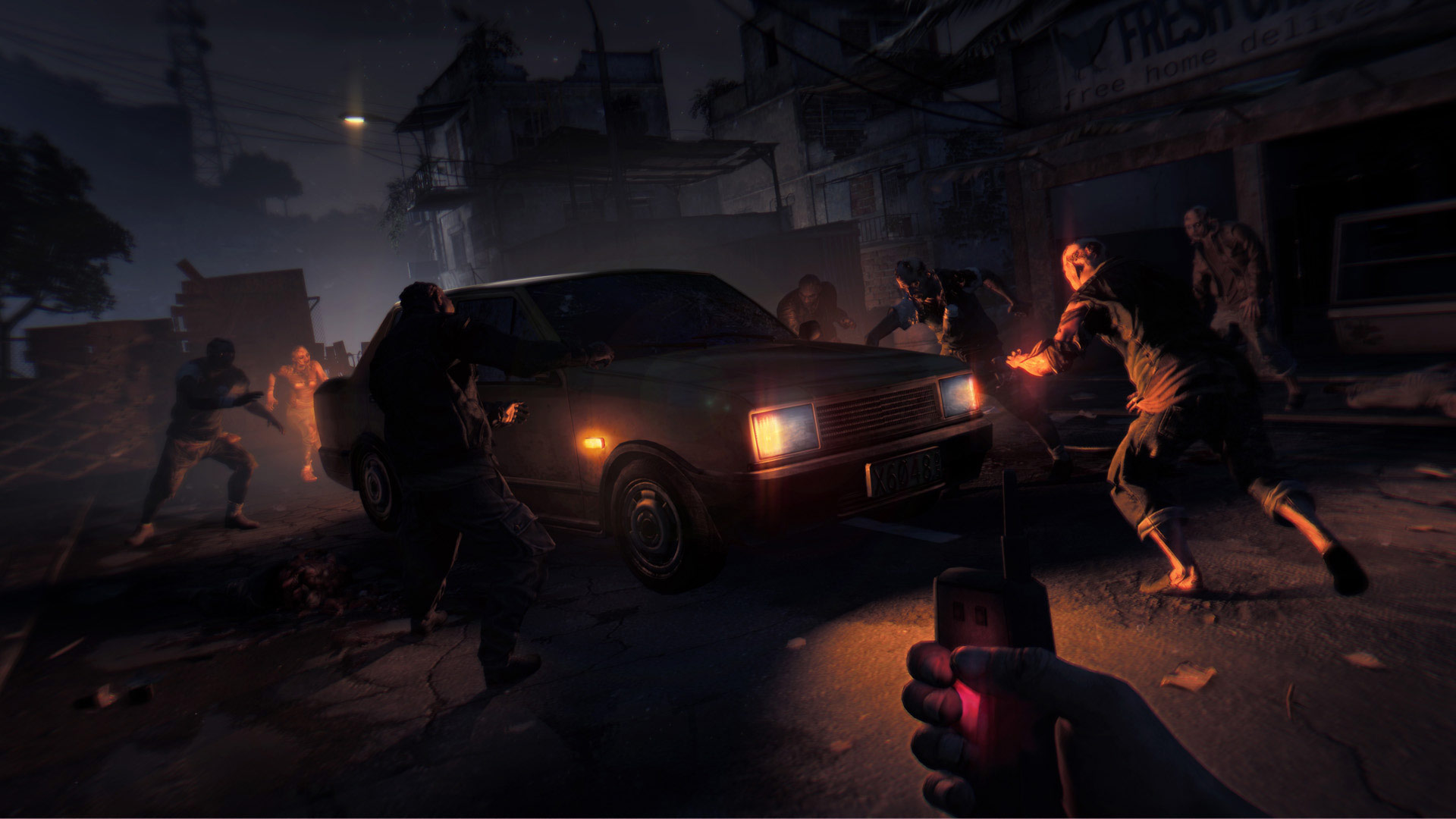 Will there be split-screen at all?

Michal: Not that I believe.

Dying Light was originally meant to come out earlier. One of the quoted reasons for it being delayed was because of a desire to innovate. Can you tell us what sort of innovations took place, and what was done with that extra time?

And it’s becoming a lot more common for a company or developer to delay a game to get it right.

Michal: Exactly. Not mentioning any names, but there’s so many times when I’ve bought a new game, put it into the console, day one release, and I get a message saying an update is available for you right now – total download, 20 gigs – and you think to yourself “Seriously? On day one it’s already broken?”

And that’s a best-case scenario, since sometimes the game is broken in terms of playability.

Michal: I don’t know, it’s like playing twenty bucks to see a really crap movie. You just get really pissed off.

How heavily does story feature in the game?

Michal: There’s a strong story element. In Dead Island we had four characters to choose from, Dying Light is just one. We decided to go to one because it lets us concentrate and focus on the story a bit more. We do want it to go deep, with an explosive emotional start as well, but I can’t reveal too much about the story. The things that are happening in the city will really shape the character as well.

As far as the events throughout the city go, is it a case of mostly scripted events or is there also emergent gameplay?

Michal: There’s a lot of random events happening. You might be on a mission, then you’ll see a plane fly through and it’ll drop airdrops containing supplies that are essential to you and your group. You’ll have a choice – do you go after the air drops since they’re not going to last long, with other groups trying to get to them, or do you stick with the mission because there’s not much time before it gets dark. Those sorts of choices and random events will be happening. 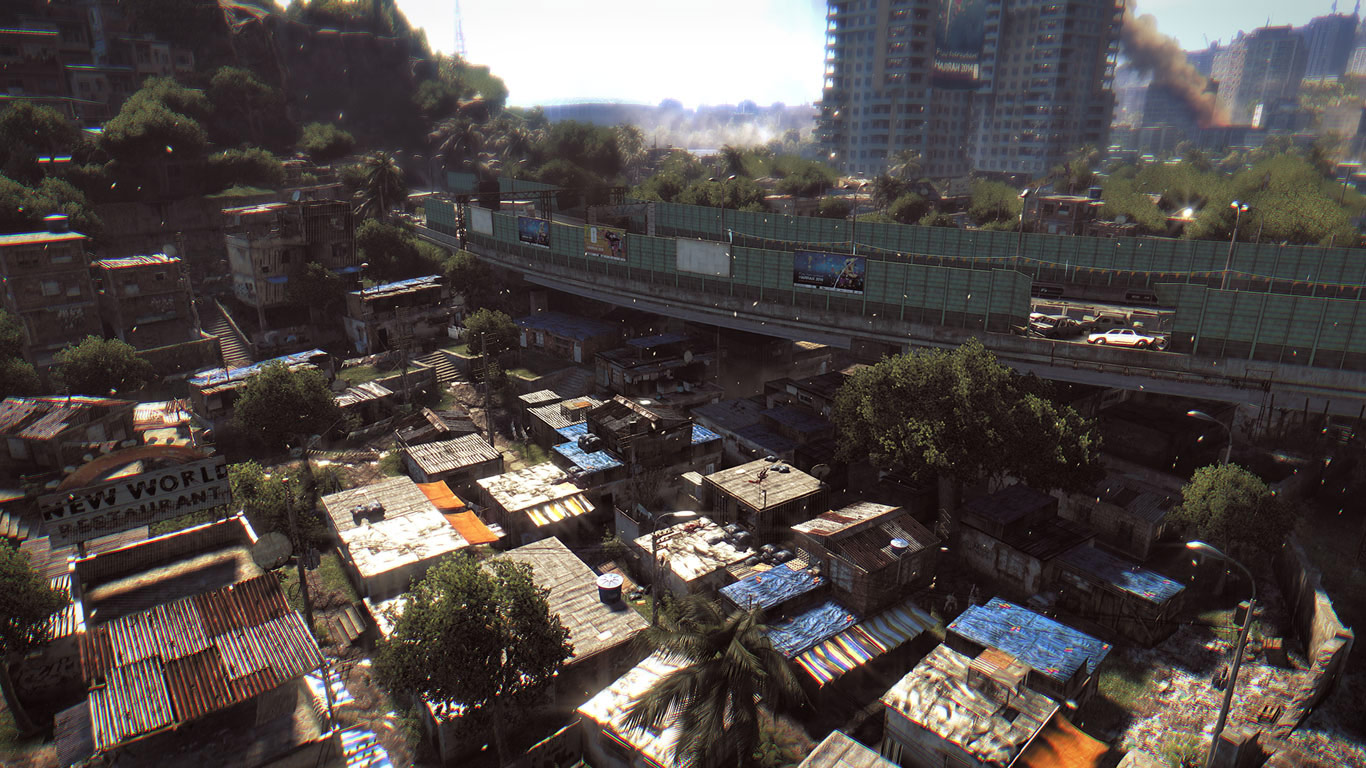 Unrelated to Dying Light, Techland is apparently working on another game called Hellraid. While your focus at the moment is on Dying Light, Hellraid does sound quite interesting. Are you able to say anything at all about it?

Michal: Yeah, I love Hellraid, I really do. It actually started off as a mod for Dead Island, but there was so much love for it and it was our little baby. We decided to do more than just a mod, and started to make a game out of it. It’s a traditional hack-n-slash. If you’ve played Heretic, if you’ve played Hexen, it brings you back to those days. Once again, just as with Mirror’s Edge and the parkour movements, we haven’t seen anyone do a game like that in a long time, so we’re going back to those roots. Very excited about it – early release is coming out in Fall (Autumn) and no date yet for the official release, but definitely check it out – I love that game too.

I’ve played Dying Light and one of the things that stands out is that although it’s a different game, you still have the feel of a bleak environment that was consistent throughout Dead Island. How much of that is Techland’s style?

Michal: The core of the people that worked on Dead Island also worked on Dying Light. With anything – movies, art – you put a bit of yourself into it, and you could call that style. Those people that did concept art and other things for the game, they’re putting their heart into it, so you can see the resemblance in it as well, and those people are becoming Techland as well. That’s the main reason why you’ll see similarities.

Lastly, if there was a Zombie Apocalypse, how long would you survive and how would you do it?

Michal: Aww man, I don’t give myself that much time! I haven’t done much exercise lately and I actually smoke cigarettes as well, so that’s even worse. But Dying Light has taught me a few things, so tips for survival? Always aim for the head. If there’s too many of them, do not be a hero, run. And stick to the rooftops. Actually, I give myself a pretty good chance.

Alright, thank you for your time. It’s been a pleasure.

Thanks to Michal, Techland and Warner Bros for the behind-the-scenes on Dying Light, which is due to be released in early 2015. You can read more about Dying Light at the official site.