Following Transistor’s new build at PAX Prime, Katy Goodman and Robyn Miller talk with audio director Darren Korb about music in games, inspiration, and are even joined by a special guest.

At PAX Prime I had the pleasure of getting some hands-on time with the new build of Transistor, Supergiant Games’ spiritual successor to their title Bastion. Though little changed in terms of the actual level within the demo, it was an entirely different beast in terms of how it came together as an experience. I’m always amazed to see how small subtleties can completely change the way in which we view games—this is something that can even be seen in “next-gen” graphics, which use the smallest of environmental aesthetics, such as shadows and lighting, to create titles that brush the rim of reality. But, in the context of this Transistor build, what truly caught me off-guard was the difference the soundtrack made in the overall emotional appeal of the title. Transistor went from feeling like a game in development to a completed entity that had a voice of its own (despite its protagonist’s lack of one).

Intrigued by the overall sound design of Transistor, Robyn and I decided to catch up with Darren over Skype.

Katy: So to start with a bit of an ice breaker, what are your five favorite videogame soundtracks?

Darren: Oh man, that’s hard. I’ll start with Marble Madness for Nintendo, the NES. I loved that game. That was one of the first games when I was a kid where I just thought, ‘Wow this crazy, I’ve never heard stuff like this.’ So that was really cool. I like that one a lot. I really like Fall Out 2 in particular. I played that game a ton and I think the soundtrack has a great vibe; it reuses some of the tracks from Fallout 1. I really like Diablo II; it was really sparse and there wasn’t a ton of music, but it really did a great job setting the tone and putting you in the place. I actually like the Plant vs. Zombies music, the first one. Again, it was a thing where it’s only a few pieces and it was very simple, but in the way it was implemented it matched the game well and had an excellent vibe. So I really liked that. I thought the soundtrack for Sword and Sorcery was really cool—super atmospheric and you know, very interesting in a way that not a lot of soundtracks are.

Katy: It’s funny that you mention Diablo, because a lot of the music in that, especially the music when you’re in Tristram, reminds me of the Bastion soundtrack.

Darren: Yeah absolutely. That was something that was definitely an influence, especially when we were making Bastion. You know, when you make an action RPG you have to look at Diablo because that’s like, the one. That was definitely on our mind to some degree, so it was a bit of homage to some extent.

Katy: Awesome, so what exactly got you started with Supergiant?

Darren: Well, I guess it all started when I was eight years old. Amir and I became good friends when were little kids—and we grew up together and played in bands together. When he co-founded Supergiant he asked me to do all of the audio and I said yes, and that’s it. Unfortunately it’s not very complicated. 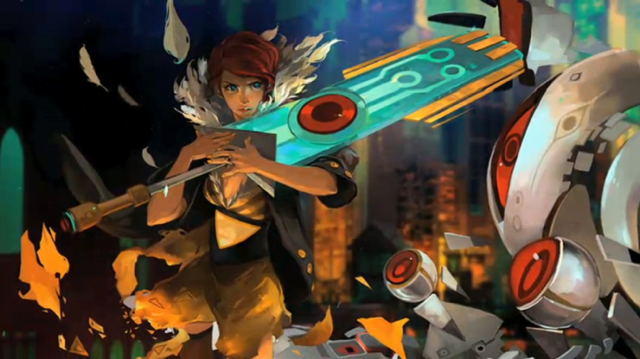 Robyn: In the past you’ve described Bastion’s music as acoustic frontier trip-hop, and you’ve also said the genre is very connected to the feel of Bastion itself. I was curious if you’re transitioning into a different genre with Transistor and if so, how would you describe it?

Darren: Yeah, the Transistor soundtrack definitely feels pretty different. I wanted to do some of the similar synthesis of different styles that I did in Bastion to some degree, but it’s a different set of stuff this time around. This game, you know, feels a lot darker. The story is more of a personal story, whereas the story in Bastion was more pastoral. It was less personal. So this time we are trying to do some more specific stuff story wise. And so, I mean, the music this time around has a lot more electronic elements. It feels quite a bit darker. There is a lot of percussion and stuff, but it has a less of a trip-hop vibe. I’m taking influences from everything like Imogen Heap, Björk, and Radio Head, to post-rock and electronic. So it’s going to feel pretty different, I suspect.

Robyn: If you had to give the genre for Transistor’s music a name, what would you call it?

Robyn: I like it. Another question along similar lines: in the Bastion soundtrack, the character themes, particularly Zia and Zulf’s, enrich the understanding of the characters and their behavior in the game itself. Can you give us an idea to what role the music will play in Transistor in the development of Red’s character…. or other characters?

Darren: Sure, yeah… a little bit. You know Transistor is a game where you play someone who was a singer. It’s definitely an important part of her character, so the use of vocals in this game has increased. I’m definitely hoping that will contribute to the understanding of her character.

Katy: What were some of the challenges of making music for a silent protagonist whose silence is something less genre-based and more based in plot-development?

Darren: Well, I mean Bastion had a silent protagonist, but that kid never sang anything. This time, it’s interesting. It took me a while to find the voice of the character; we spent a ton of time in pre-production fiddling around with ideas in January of 2012, or maybe even before that, right after Bastion in 2011. We’ve been doing a lot of experimentation—all the different disciplines, music, art—we spent a lot of time trying to find a center for what we wanted to do creatively. This time Red is a character who is a popular music artist in the world of this game, so I’m sort of tasked in a lot of stuff, defining a bunch of things of like, ‘What is the music that people in this world like?’ ‘What is interesting about this music for this culture we’re creating?’ So there are definitely a lot of responsibilities placed on the music and the songs this time around.

Katy: That’s one thing I really noticed with the new build you guys had at PAX Prime. It felt like everything came together so well, the new music really helped everything culminate into more of an experience. That was really awesome.

Robyn: Overall, how would you say that process for making the music of Transistor has been different than Bastion?

Darren: I would say for Bastion, what we did as a whole was see where everyone could best contribute to the game in our ability to execute tasks without help. It’s something we can all could do without using resources that we didn’t have. So, I think Bastion’s creative process was less targeted, in some ways. We just didn’t have a lot of time or scope to prototype different things within the game. We just sort of went with what we liked it and it worked out. With Transistor it was more targeted and had more specific creative goals in mind so that makes it more of a challenge. It’s not necessarily right in my comfort zone, or for everyone I think. It’s us trying to push ourselves outside of what we would necessarily normally do. It’s been challenging. And in another sense it’s our second project and you know, you have your whole life to think about your first thing, and with the second you only have so much time. And it’s in relation to another game we made to some degree, so that’s been challenging mentally. We want to make it have its own unique voice. We want to make sure it’s a new experience for people, you know, but we also want it to feel like we made this game. So how do you keep the identity of the people that made the game while also changing the identity of the game? That’s been the challenge this time around.

Darren: We were all prototyping everything very early on, so this is the first game we were able to start with a full team. We added a couple artists along the way, but we started with the full. Jen was prototyping art, Greg was coming up with story ideas, and I was prototyping music all at the same time. So we spent a long time trying to figure out the sound, look, and what we wanted the game to be a about. We also spent time trying to figure out what we wanted Logan’s role to be in terms of what the character was going to sound like and how he was going to speak to you. It’s interesting because when you look at the game you have this character who talks to you the whole time, sort of like a narrator, but the way we arrived at that is because we feel like it’s different from a storytelling perspective—having this omniscient narrator. We tried so many things to get at this to feel different, and we’re really proud of that. A lot of things like that, in terms of working with the title, have been really interesting in this process.

Robyn: Where would you say your music style comes from? Do you have any creative influences?

Darren: Yeah, a ton. Generally on my musical style or specifically on Transistor?

Robyn: A bit of both? *laughs*

Darren: As far as Transistor goes I am looking at some specific stuff. Imogen Heap has a lot of the tone we’re trying to capture—she’s super awesome. Also people like Björk and Radio Head. I just discovered this band the other day that Greg told me about called Poliça (pronounced Poli-sa) from Minnesota and they are super awesome. They have a vibe that I’m going for with this game, so I don’t know if it’s an influence yet, but it’s cool.

See part two of the interview, where we talk bands, the importance of music in video games, and meet our special guest.