A Funny Thing Happened On The Way To Draenor

I thought I knew what I had waiting for me when I bought it. In many ways the game felt like a known quantity; at worse it would feel the same niche that had previously been occupied by Morrowind and Everquest. Those two honed-in on a love of exploration, and brought about marathon gaming sessions that’d lead to bed as the morning birds were waking.

The shift from punishing deaths and awful corpse-runs reframed the experience of dying into a repair bill and a touch of embarassment, encouraging exploration not only of the game world, but of gameplay.

The button lights up, the meter replenishes just enough to pop off an arcane shot before the beast hits your deadzone, but wingclipwingclipwingclip and you’re home. Wow, right?

I started with the game back during vanilla – not right at launch, but a little while after the game had taken hold. I’d been a fan of Blizzard from the era of perfectly working soundcards, and with the exception of the ill-fated Star Wars Galaxies, no MMO had been in a position to capitalise on lore I knew. I was never a hardcore player, but I’ll admit it before whatever audience is arrayed here, I was once a World of Warcraft addict. Maybe it wasn’t a strong addiction, but like so many games with an abundance of content, I was hooked.

Sure, the number of times I’d gone on raids could be counted on digits (without taking my shoes off), but the exploring, quests, the sheer chaos of world pvp, those weighed heavy in its pull. Suddenly there we were, hanging out with Tyrande in Darnassus, Malfurion snoring in a veridian slumber, all right in front of us closer than our mouse-wheel could scroll to. The legends we’d played with in earlier games were now our leaders or quest-givers. The levels we’d run through were now places to explore, and now we weren’t alone. 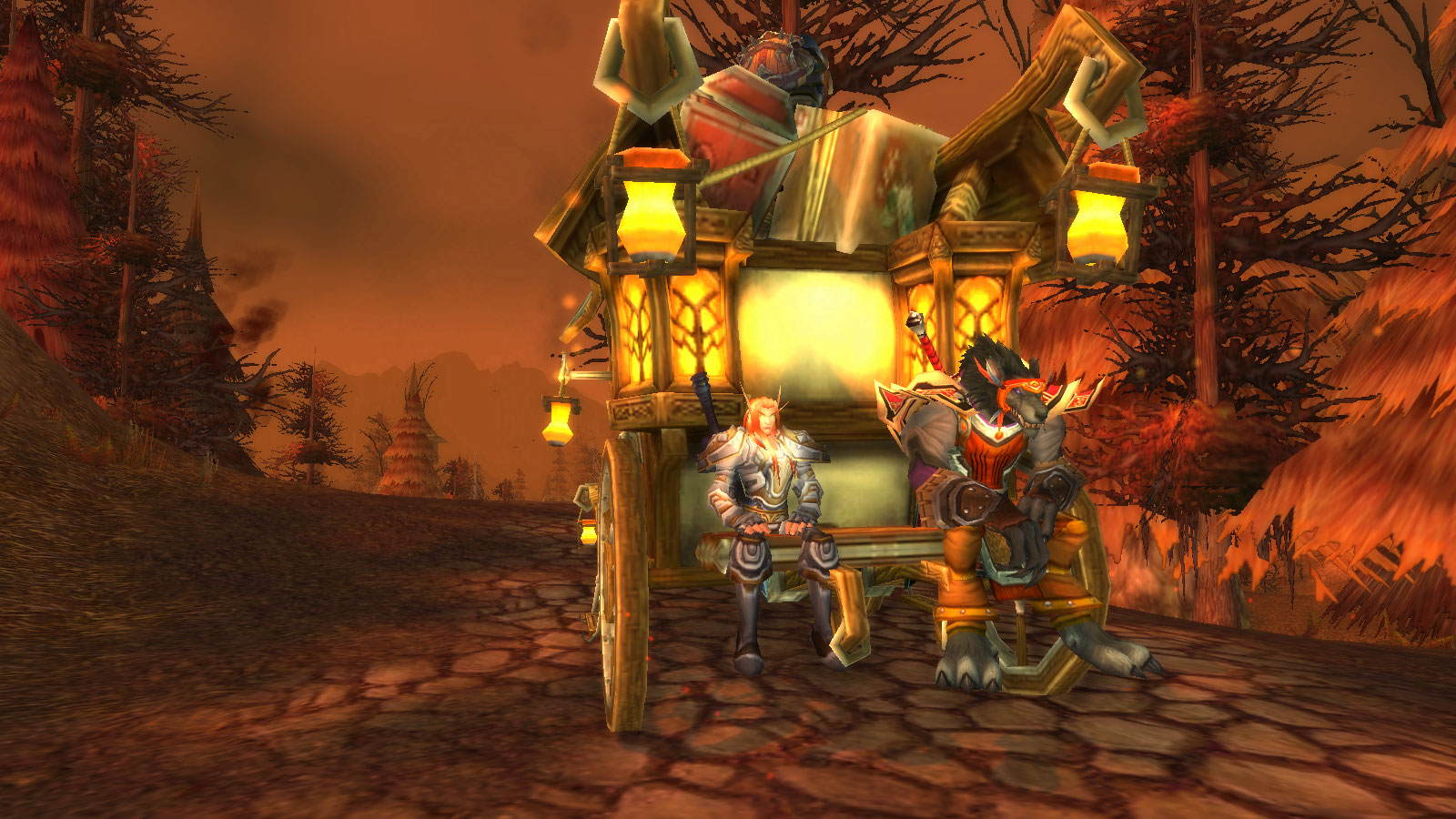 The flurry of activity that came with the release of each expansion filled starter zones and endgame dungeons with hordes (and alliances) of players. Nothing quite came close to the first days of the Oceania realms, brand new servers targeted at antipodean prime-time. The old jokes were there yes, but it came with a sense of community that eclipsed what a lone guild could offer, with a personality distinct from our North American kin.

It’s why the Warlords of Draenor launch event in Sydney mattered.

Still, it’s hard to look at the ten years since the game was released and feel that sense of time. Like much of Blizzard’s catalogue, WoW has been an ever-changing environment, and whether it’s the expansions, gradual changes or even the infinite dragonflight, it doesn’t feel like it’s been that long.

My most prominent memories of the game from those early days were of running around Stranglethorn, defending Ashenvale from other players, helping out others with a casual lowbie guild, and that one time in Darkshire where I bested a ?? rogue that didn’t know Flare broke stealth. I never got to endgame then, but it didn’t matter – the world was living enough. Even if you weren’t at that stage, being present for the unmasking of Lady Katrana Prestor shifted the scope of the game to something broader, because it happened publicly. Ahn’Qiraj took that to another level.

It was loose at times, but that changed with Burning Crusade. It focused the eye of the franchise on a single adversary in Illidan, just as Wrath of the Lich King did with Arthas, and to some extent, Deathwing in Cataclysm. BC also brought in the Caverns of Time, allowing Blizzard to rebuild its lore, retcon where they needed to, and reveal the richness of their universe for those new to it. Toward the end came the Isle of Quel’danas, which brought daily quests and more importantly phasing. It’s the latter that gave the first touches of a personalised experience, which Wrath pushed to new limits. 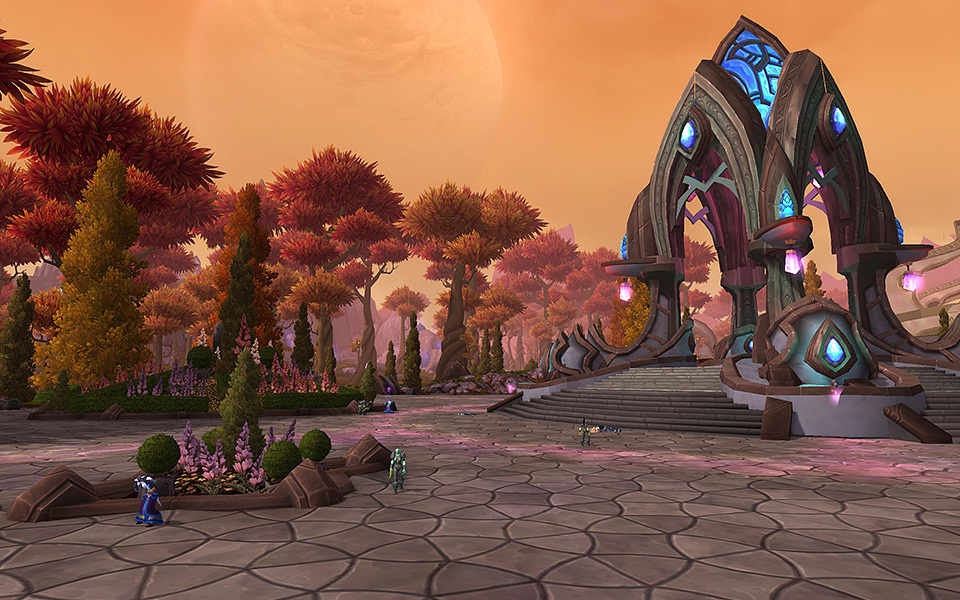 Cataclysm changed it all again.

For me it’s here where the game lost some of its magic. I went forward a few levels with my main though never capped. I didn’t feel the urge to. I stepped into the confines of the game a few times after, but I didn’t stay. I passed over Mists of Pandaria without a moment’s hesitation, yet it wasn’t until the latest expansion, Warlords of Draenor, that I gave serious consideration to playing again.

The return to elements I knew was appealing. While I’d played the first two in the series, it was Warcraft 3 that gave me the characters I attached to – the subversion of Grom’s corruption by Mannoroth was a shiny lure that appealled to the alt-fic thirst in me. To get there meant playing through (forsaking the level 90 boost for the sake of another character), but I did it not with my level 83 Draenei, but with the character I started on the first day of the Oceanic realms; a level 30 orc hunter.

Playing an orc felt the right fit for going back to Draenor with Thrall, and as luck would have it (despite the garrison style not reflecting it), the Alliance focus of the expansion squared over the Draenei – my favourite of the WoW races.

There are parallels to be found between Cataclysm and Warlords of Draenor. While Mists of Pandaria sits off to the side, both in story and in area, both Cata and WoD take us into content we’ve seen before. Sort of. While it revitalised the world for some, the ledger of changes in Cataclysm removed a lot of the known. Quest hubs that had become sentimental favourites because of formative experiences? Replaced by streamlined changes.

It brought in new kinds of play and allowed players to fly untethered across Azeroth, but it also put the player at distance to the world, changing the familiar and invalidating much of their empirical knowledge. New areas and races were added with an emphasis on scenarios, yet portions of quest chains (such as the Opening of the Wrathgate) and epitomising constants like the Southshore/Tarren Mill rivalries went missing. 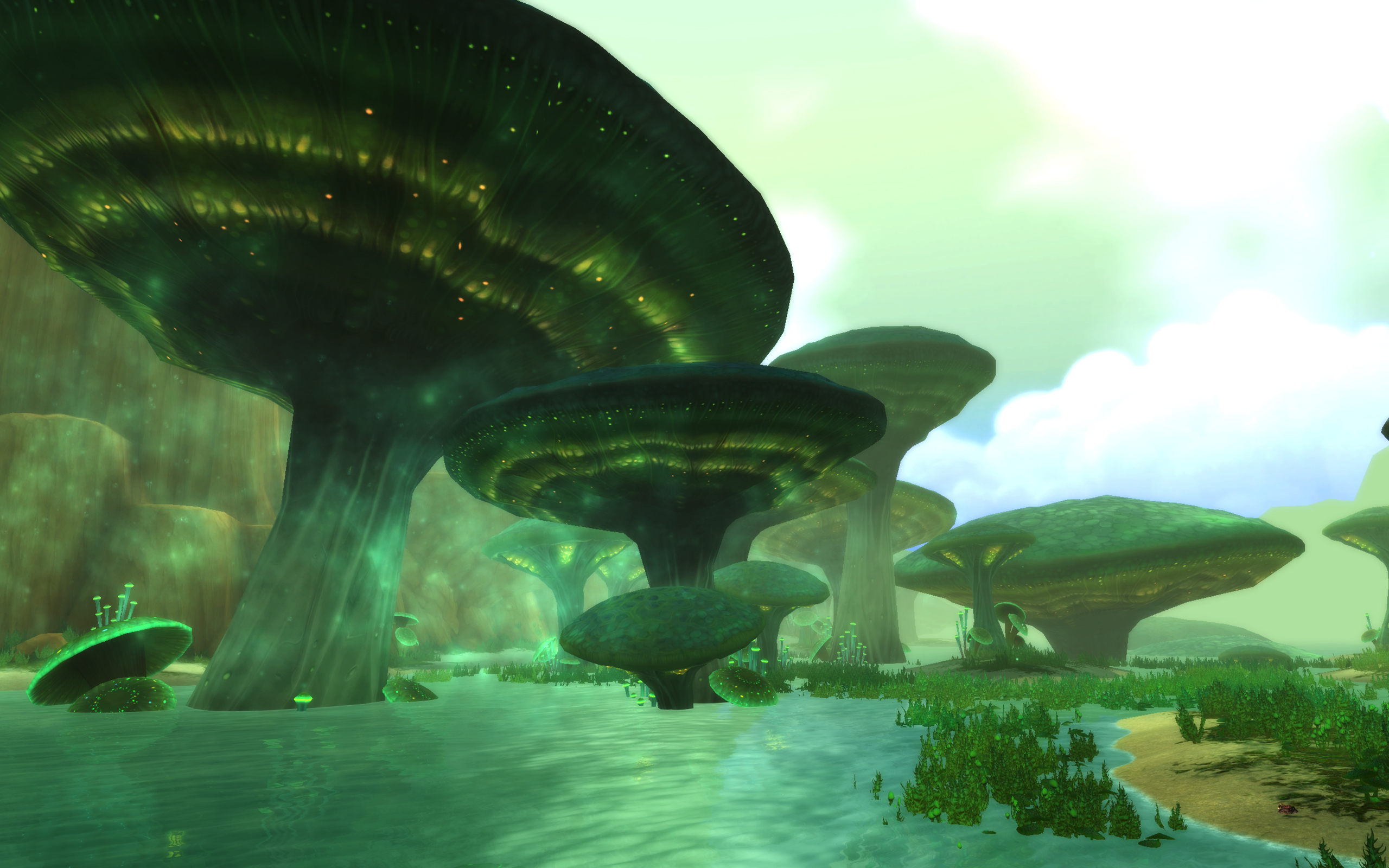 Blizzard get the nostalgia angle. It’s why SS/TM came in as a battleground for the 10th anniversary. It’s why the Caverns of Time exist, why Legacy dungeons have come back through 6.2’s Timewalking, and perhaps why we went back to Draenor at all.

In hindsight the balance of changes were positive. Some of the newer content is utterly clever and often hilarious, particularly the quest giver chain that begins with Welcome to the Machine in Hillsbrad Foothills, and the tall tales of the dwarven trio in the Badlands.

Back to mean old Orc-y, and there were a lot of places to run through. I rounded off each zone on my way to ninety, and completed as many quests as individual zones offered. While there was not a clear built theme, what there was beneath each environment was a world recovering, and beneath each quest, the uneasiness between all races, not just the factions themselves.

The real surprise in Draenor has been the writing. WoD does receive criticism for treating the player as a saviour, but the eye is on the NPCs. As much as the franchise has become a Thrallophile’s wet-dream, it’s the emergence of Yrel as the centrepiece of the alliance story that brings it home. The horde’s investment in the Frostwolves is a known quantity in the lore and it’s handled almost tongue-in-cheek. What happens with the former-Eredar exiles rapidly pushes past what’s established in Burning Crusade and into new territory. 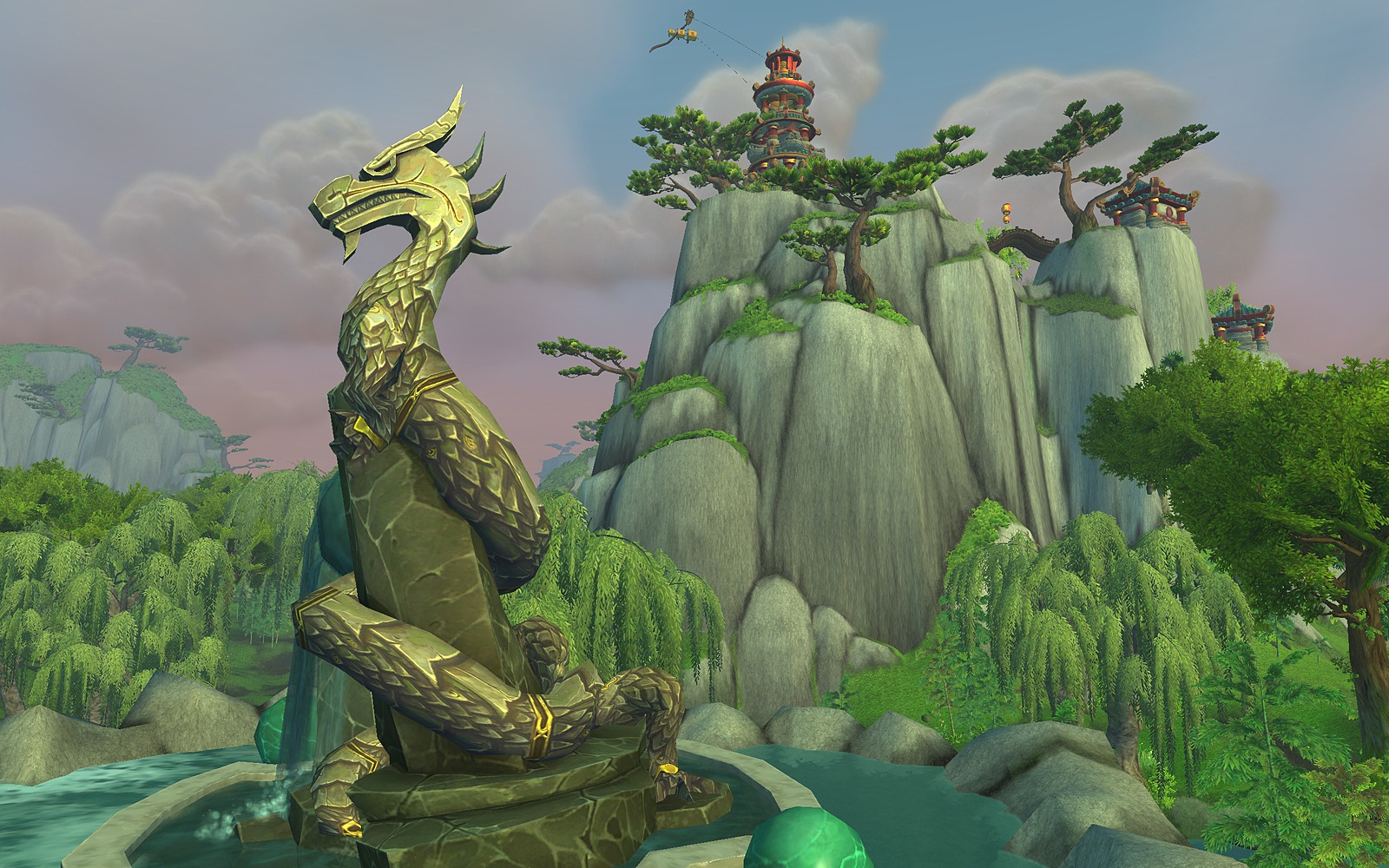 The funny thing that happened on my way to Draenor is that I fell in love with Mists. The elegant simplicity of the story woven through it became the draw – I was returning not to hit 90 and soldier off to Draenor, but to see what happened. It isn’t even that the concept is novel or even fresh, but that it moves away from what other expansions have done. Illidan and Arthas are antagonists because of their character, but Mists makes it our actions and our factions.

While Garrosh’s path leads away (and it’s a shame the Vale of Eternal Blossoms isn’t phased because it would’ve been great to be able to experience it as it was), it is handled with a different pace and style. There are missteps in Mists yes, and Draenor improves on scenarios, but it’s still a grand story that deceives from calm beginnings that slowly burn into something bigger. 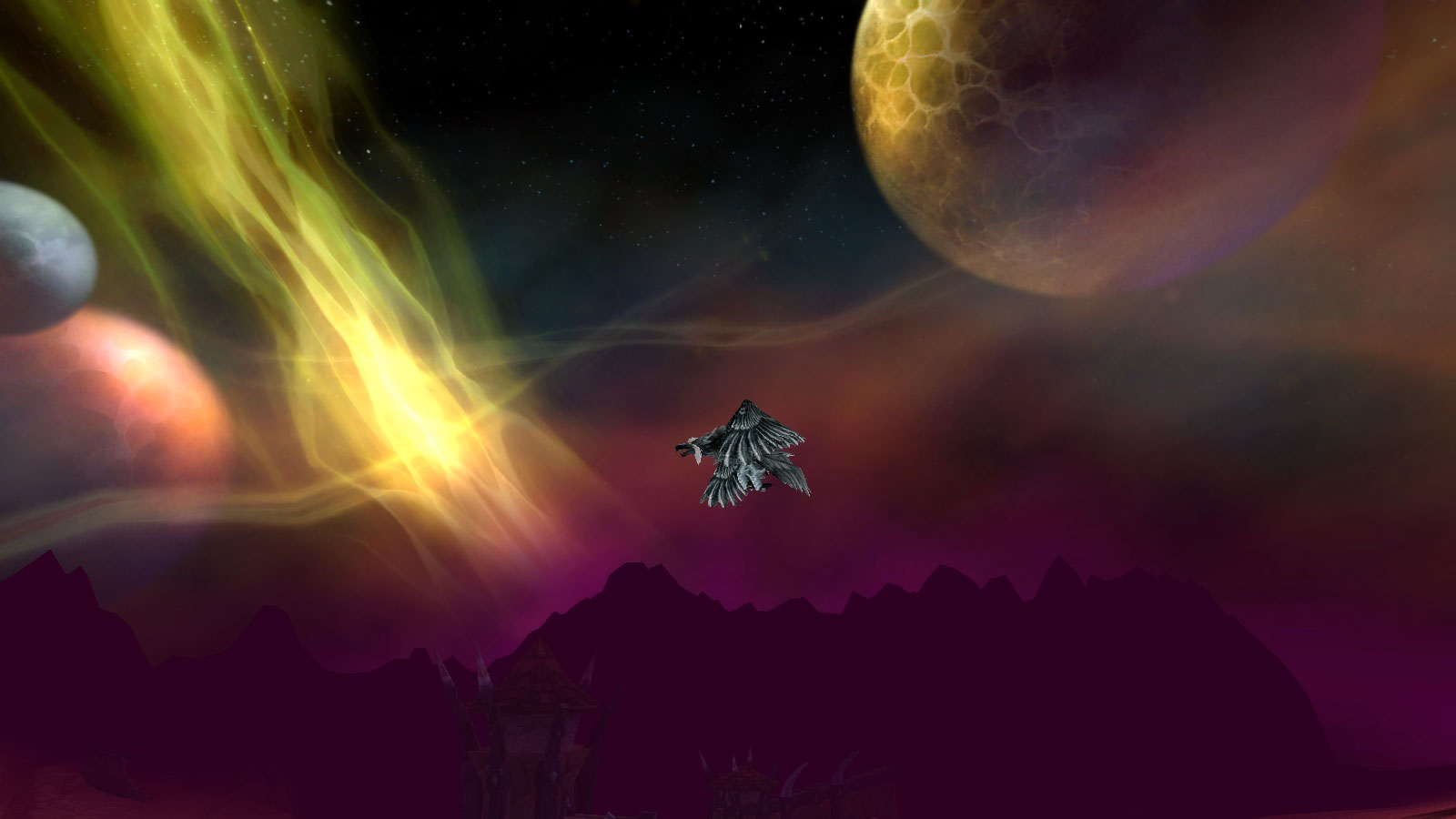 My feelings toward Warlords of Draenor are mixed and my subscription has lapsed (for now), but the way Blizzard move their stories means I’ll be coming back. The game still has relevance after ten years, and while it may not lead the pack anymore, it’s not yet been left behind.