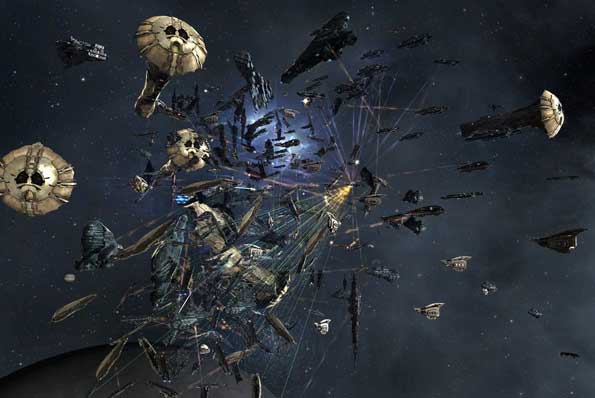 An accidental click of the wrong button started one of the largest battles in the history of long-running MMO Eve Online this weekend, resulting in the loss of more than $20,000, or several billion ISK (Eve’s in-game currency).

The battle lasted over two hours, but this cool user-created video helpfully shows it in three minutes.

The fight has been covered in detail by many websites and news outlets — from popular Eve commentary sites to large tech sites to international newspapers — but the short version is that two of the game’s largest coalitions — the Clusterf*ck Coalition (CFC) and the Honeybadger Coalition (HBC) — and their temporary allies duked it out in an escalating fight after one CFC player in a very large and expensive ship (a Titan, which takes 3 months to build) accidentally jumped into hostile territory when he meant to set up a jump bridge to allow other players more equipped for battle to jump into the system (the buttons are right next to each other).

Confused yet? This Reddit thread about the battle goes into more detail for players and non-players alike.

Ultimately, CFC lost the most ISK — in part because they are part of a powerful unofficial alliance of 9,000 or so players called the Goonswarm Federation, which is hated by so many players of all different alliances that the fight essentially ended up being the Goons vs. everyone else.

But no doubt both sides will be arguing for awhile about who won strategically.