It’s time to gather up your remaining gift cards from the holidays.  You’re gonna need ’em.  Bethesda has just put their digital and physical limited editions of The Elder Scrolls Online up for pre-order.  Calling them the “Imperial” Editions, they’re everything you’ve come to expect from Bethesda.  Oh, and they’ve also released a new cinematic trailer because they love us so.  Read on for all the details.

The digital Imperial Edition of The Elder Scrolls Online will set you back $79.99, and comes with a virtual pile of virtual toys to play with.  As the name implies, the Imperial Edition allows you to play as an Imperial, and play in any Alliance.  As an Imperial, you’ll have access to unique gear, bonuses, crafting styles.  You’ll be able to summon an Imperial mount, and roam around Tamriel with increased speed.  You’ll also get an exclusive mudcrab vanity pet who’ll loyally follow you around.  And for all of you romantics out there, the Imperial Edition comes with the Rings or Mara.  Perform the ritual with a friend, and you’ll receive an experience bonus while playing together.  D’awwww…

The physical Imperial Edition turns the awesome knob up even higher.  Behold what $99.99 will get you. 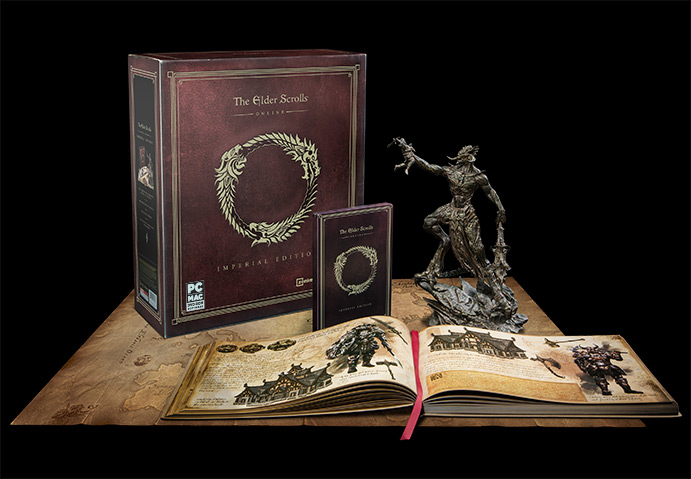 In addition to all of the goodies included with the digital edition, the physical edition comes with a number of highly collectible and highly cool items.  Most notable is a 12 inch tall statue of Molag Bal, Daedric Prince of domination and enslavement, and champion of the Daedric hot dog eating contest, 9 years running.  In addition to Molag, you’ll also get the Emporer’s Guide to Tamriel; a 224 page page illustrated guide written by Imperial scholar, Flaccus Terentius.  And of course, no special edition from Bethesda would be complete without a printed map, measuring 21” x 26” and detailing Cyrodiil and all Alliance controlled areas.

If all that wasn’t enough, there’s a brand new trailer too, and not just any trailer.  It’s an 8 minute long CGI epic which probably cost more to produce than the GDP of many small countries.  So grab some popcorn and get comfy.

Damn.  Both versions of the Imperial Edition, as well as their standard edition counterparts, are available for pre-order now.  The Elder Scrolls will be released for PC and Mac this April 4th, with versions for PS4 and Xbox One following in June.