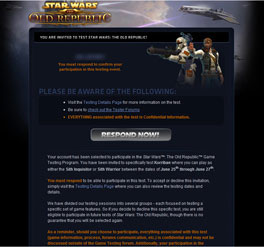 Bioware has an update on all the beta testing for Star Wars: The Old Republic and it looks like the original gangstas from the initial round of invites are being invited back for another weekend.  Community Manager Stephen Reid explained that one of the reasons people were being invited back is that there were issues with the initial inviatations being kind of lost in the mail so to speak and, in a nut shell, those that originally signed on to do it didn’t really get to experience the game.   Bioware is trying to “do the right thing” according to Reid, who admits that this reinvitation of beta testers will be a “one off” thing, noting that those invited once will not be invited again.

You can read the whole forum post here where Stephen Reid explains exactly what’s up and why fans should keep loving the hell out of Bioware (and let’s be honest, we do).