In honor of the Save Game Global Summit, currently entering its second week in New York City, Bioware is releasing a new patch and multiplayer pack for Mass Effect 3.  OK, I don’t know for sure that they’re releasing it this week as a tribute to Save Game, but the timing does seem rather odd, don’t you think?  The patch fixes a long list of single and multiplayer bugs, while the new multiplayer pack includes new maps, characters, and weapons.  Read on for all the details.

The patch, officially known as version 1.03, fixes a very long list of problems, mostly in the multiplayer sections of the game.  It should be available to PC users now, and will become available for Xbox and PS3 users on Thursday.  Here’s the full list of fixes, straight from Bioware’s official forum.

Common to all Platforms:
-Fixed an issue where sometimes facial movement would not match the voice over if a hitch occurred
-Fixed an issue where taking cover in a certain area of Cure the Genophage mission would cause players to become blocked from progress
-Fixed Action mode so it will now respect difficulty if set in the main menu
-Fixed an issue where the player would always be walking forward instead of towards objective in The Return mission
-Fixed the Ultralight Materials SMG weapon mod in multiplayer so it correctly affects weapon recharge
-Fixed a rare case where the reinforcement pack purchases could fail and take currency without giving cards
– Fixed the issue where users logged off/disconnected during multiplayer gameplay would not log back in properly until their game is rebooted
-Fixed the issue that multiplayer Geth sentry turret flamethrower would endlessly repeat audio SFX
-Fixed various multiplay maps where a player could fall through the map during multiplayer gameplay
-Fixed the issue that using an ops survival pack consumable immediately before death could have no effect. It now works as intended
-Fixed the issue so the Falcon weapon in multiplayer no longer sometimes fire blanks
-Fixed the issue where enemies who were detonated with a biotic power while in stasis would become invulnerable
-Fixed the issue where Banshees who got hit with a rocket launcher would not play the correct death animation
-Fixed the issue where joining a match in progress while a Geth prime turret is active leaves the turret there for the remainder of the game. It now disappears.
-Fixed the issue when joining a match in progress while the host is performing a combat roll would play firing animation on the client for the host character, for the duration of the match
-Fixed an issue so Vanguards who are charging as they die are no longer being routed to the ground
-Fixed Host migration that would sometimes cause players to start on an incorrect wave
-Fixed the issue when a client quitting a match during deep bleedout causes muted/ducked audio to persist into next match
-Fixed the issue that when being revived at the same time as being executed would leave players in an T-Pose state
-Fixed the issue that when a Banshee takes enough damage to stop her charge state, her normal state is not immediately returned
-Fixed the issue where a player could enter a state when completing cover interactions near a ladder which could lead them to becoming invulnerable and unable to deal damage
-Fixed game hitching of 1-2 seconds at start of waves
-Fixed clients occasionally seeing nonstop firing visual effects
-Fixed evaded projectiles having an erratic course
-Fixed an issue where selecting resume after death could occasionally cause henchmen to not spawn properly
-Fixed weapon recoil that could become reversed with a Turian when stability mod and passive power present
-Fixed the cover slot in Meet the Diplomats mission would cause a player to become stuck
-Fixed Geth prime and harvesters taking headshot bonus damage when they shouldn’t
-Fixed shooting the atlas in the cockpit with a penetration weapon doing double damage
-Fixed the Kishock Sniper Rifle that would hit head bone (critical hit) on enemies that should not be possible, such as the Brute, Banshee and Ravager
-Fixed and issue where clients in cover cannot do any damage to targets at wide angles relative to the cover
-Fixed an issue where player can glitch their melee combo to only perform cover lean melee animations
-Fixed an issue where while dying in multiplayer, if the player pressed the prolong life button too quickly they could erroneously die
-Fixed an issue so Drell Adept Reave audio plays at full volume for all players
-Fixed an issue that an interrupt could sometimes fail to prevent a Cerberus engineer from building a turret
-Fixed a crash in conversations after Investigate Sanctuary mission
-Fixed an issue where gear items from the Rebellion DLC would unequip at the end of each match.
-Fixed an issue so ammo consumables, such as cyro ammo, would not replicated from host to clients
-Fixed the Memory Leak going in and out of Multiplayer Menus
-Added feature to remove AFK players after a set amount of inactivity
-Added a cooldown to Ops Survial consumable
-Made ammo consumables insta-reload and damage bonus

Xbox Only:
– Fixed an issue where Mass Effect 3 soft locks in character screen if user unplugs Ethernet at “Checking downloadable content…” after accepting an invitation from multiplayer menu

PC Only:
-Fixed an issue where the Online Pass Activation screen would appear for users despite PC not having a need for an online pass
-Fixed the Galaxy Map search and rescue asset GUI not appearing when using eyefinity
-Fixed an issue where users could not scan on galaxy map when right-click is rebound
-Fixed an issue where having the PC hud (heads up display) (left shift) up when a player dies in multiplayer and revived would cause player unable to move and the hud to remain active

While the patch obviously fixes many issues, I’m a little disappointed that is doesn’t fix the bug right at the very end in which the ghost of a little boy appears, and in the span of a three minute conversation, makes me want to throw my Xbox out the nearest window and never play a Bioware game again.  But apparently, they’re still working on that bug.  We’ll keep you updated.

Now, about that multiplayer pack… Bioware is calling it the Rebellion Pack, and it features two new maps, three new weapons, and six new characters, including this handsome fellow right here… 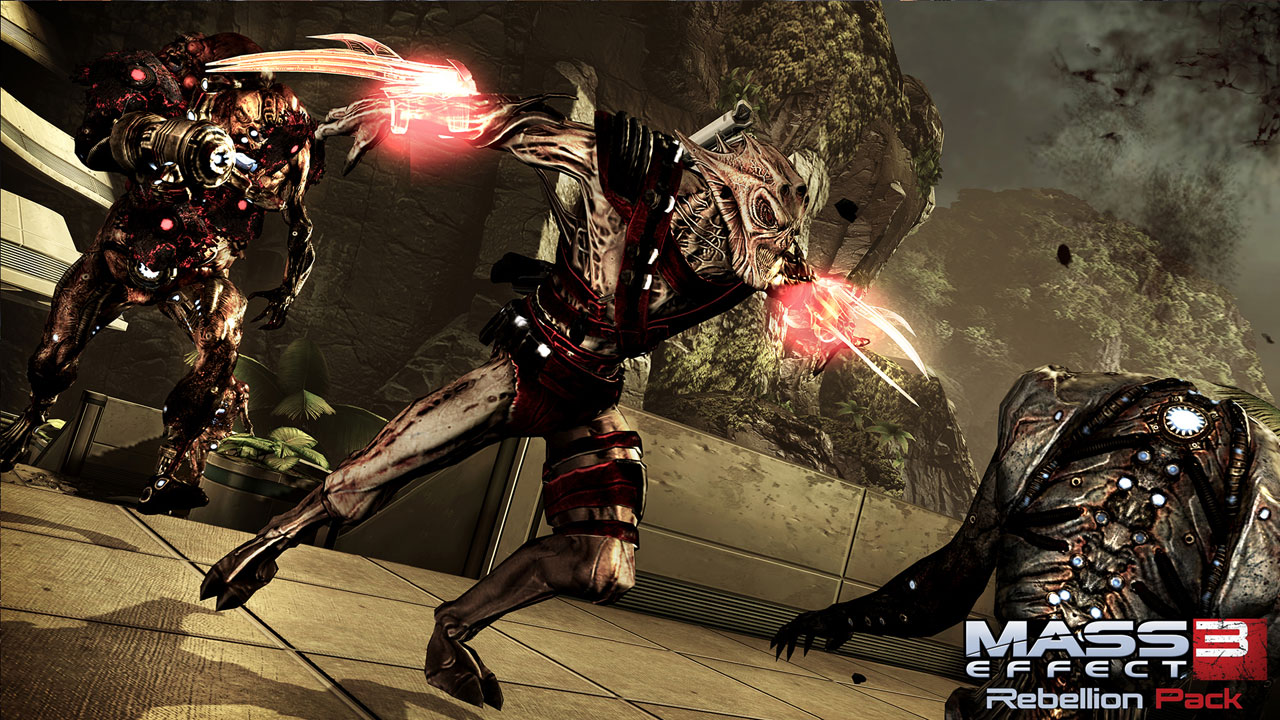 That’s right, our prayers have been answered.  We can finally play as Vorchas, and they come in both soldier and sentinel varieties.  Also available for the first time are male Quarians, and ex-Cerberus agents.  The new maps, Firebase Jade and Firebase Goddess, are set on the Salarian and Asari home planets, and bring even more variety to the already impressive collection of maps available in Mass Effect 3 multiplayer.  Three new weapons, a new team objective, and a new persistent gear slot round out the list of goodies in the Rebellion pack.  And it’s all for free.  The pack is available for all platforms in North America, and should be available worldwide by the end of the day Wednesday.  If you’re still unsure whether or not you want to download Rebellion, check out this nifty little trailer Bioware put together.

Yeah, I’m getting it too.  I’ll see you online.