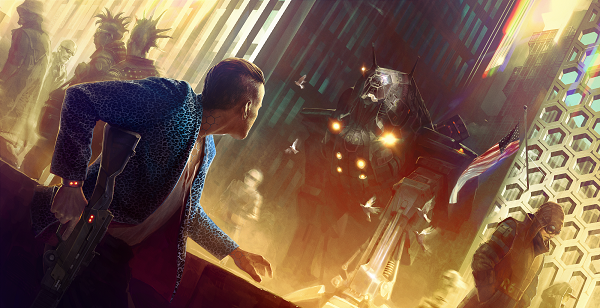 During their Summer Conference yesterday, CD Projekt announced the new game based on the original pen and paper game system designed by Mike Pondsmith. CD Projekt co-founder Marcin Iwinski made sure everyone knew that this game will have all the mature and signature aspects CD Projekt likes to bring to the table in games like The Witcher (read: bewbs).  Obviously my use of the word “bewbs” indicates that this game is for a mature audience, not just people who enjoy bewbs but also the ones who have come to expect the rich, amazingly beautiful and immersive worlds that CD Projekt has come to create.

Like any good sci-fi RPG players will get to choose their characters’ backgrounds and classes like mercenary and hacker.  Naturally there will be cybernetic implants, a plethora of fun weapons, morally ambiguous choices to make and no doubt a shit ton of techno music.

Mike Pondsmith had this to say at the conference:

For over two decades, I’ve been proud to say that Cyberpunk’s been the gold standard of what it means to be a true cyberpunk game. And it’s been a huge success for me and our many fans, with over 5 million players worldwide. But over all that time we haven’t found the right team to bring our cyberpunk world to full digital life — until now. CD Projekt Red is the team we’ve been hoping for. Their incredible work on The Witcher and The Witcher 2 shows that they share the same dedication and love of great games that we do at Talsorian. I’m especially stoked that they want our participation in making this game a fantastic project that will live up to everything Cyberpunk fans (old and new) have been waiting for. Trust me — this game is going to rock.

I can’t think of any company besides the Polish CD Projekt that I would rather have making this game.  You guys, there are going to me so many shaved heads, references to “the discotheque,” and as you’ve already seen in the pic above, downright magical fashion decisions.  Dear everyone at CD Projekt, Please can we be best friends?  Love, Jen.