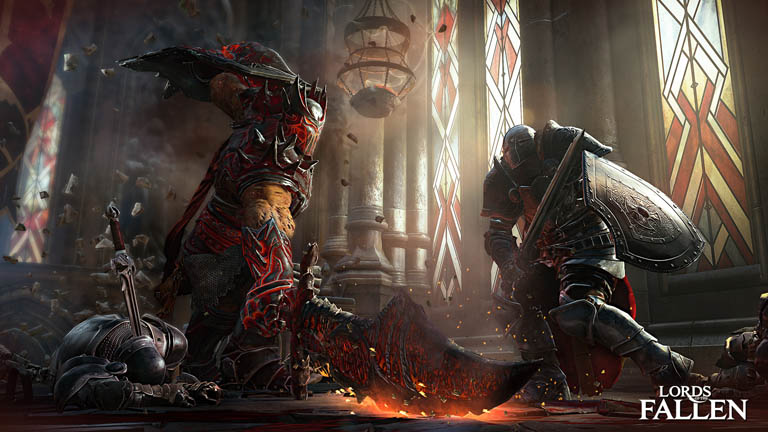 Among the many game developers, publishers, designers, and fans at this year’s PAX was City Interactive, and they were here to show off three titles coming your way in the not too distant future – Alien Rage, Enemy Front, and Lords of the Fallen.

My first stop was Alien Rage,  a first person sci-fi shooter.   Reminiscent of 80s style science fiction movies, the game definitely doesn’t take itself too seriously and looks like it has that satisfying punch when it comes to big guns and alien gore.  You’re a grizzled, stubbled, gigantic space marine loaded up with a lot of ammo, trying to take down the alien horde that’s been the bane of your existence for some time.

At the beginning of the game, we find that humans and another group of aliens were both mining the same planet for its valuable resources.  Even though there was a tenuous peace for awhile, there’s a sudden but inevitable betrayal by the alien foes, who attacked with devastating full force before retreating into the planet.  Your job is apparently to shoot them.  There is a relatively simple story to the approximate 6 hours of campaign, told mostly through audio logs scattered along the way and voiced by Courtnee Draper, who you’ll most recently recognize as Elizabeth from Bioshock Infinite.

During the gameplay presentation I couldn’t help but notice how open the environment felt, especially for a shooter.   Running on the Unreal engine, the game looks smooth and  there are 14 levels to conquer, and 10 different alien slaying weapons to choose from, each with two different punch packing firing modes.  It’s sleek and straightforward with customizable talent trees, destructible environments to use to your advantage, and a regenerative health system.  There’s skill shots, power ups, and even an achievement system.  Oh and you shoot aliens.

Alien Rage doesn’t try to reinvent the wheel, but it does make it look like a lot of fun.  You know exactly what you’re getting with this game.  Alien Rage with both a single and multiplayer mode launches on PC on September 24th, and the single player only mode will be available on Xbox and Playstation 3 some time in October. 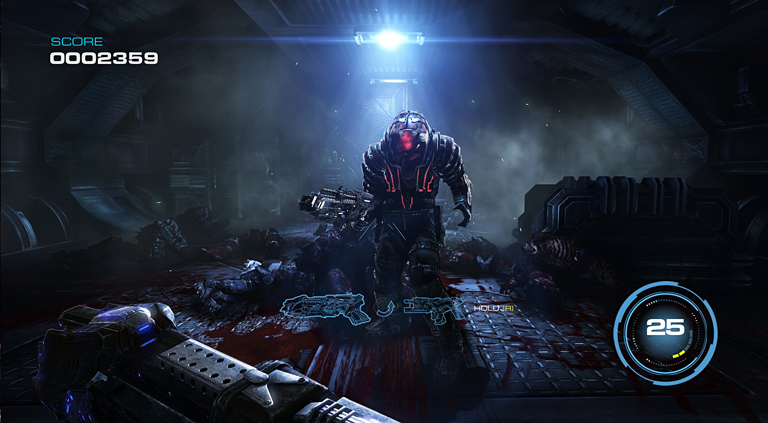 If aliens aren’t your thing, maybe Nazis are.  In Enemy Front you play as a war time journalist named Hawkins who’s entrenched deep behind enemy lines during World War II.  When we first see him he’s in the French countryside, and the events that unfold lead to him   ultimately joining the resistance. Enemy Front is an open world shooter that encourages exploration and it employs several unique gameplay styles like close quarters combat, “spray and pray” guns blazing, or stealth and sneakiness.  Want to barrel into an enemy  stronghold using a flaming truck and take them all out with brute force?  No problem, except you’ll activate every bad guy int he place so you’d better not bite off more than you can chew.  If you’d rather, you can sneak around, using stealth so you’re quiet as a mouse as you sneak up on and brutally kill the nearest enemy in an intimate fashion.

One of the coolest features I saw was the ability to tag your enemies.  Looking through binoculars at distant enemies, you can trigger a tag so that they then show up on your mini map in the lower left hand corner.  The binoculars also act as a hint system and if you click on certain landmarks or buildings, Hawkins will mention that maybe you want to check that out for whatever reason.  It’s important to know where your enemies are, and have a strategy, because once they’re on your tail you won’t be able to hide from them. If you think you’ve lost them somewhere, they’ll go into a search pattern until they find you.  You can always use your environment to your advantage as well. It’s nice and destructible, so if you’d like to blow up that truck parked next to rural French country house, go right ahead.  Oh and you shoot Nazis. 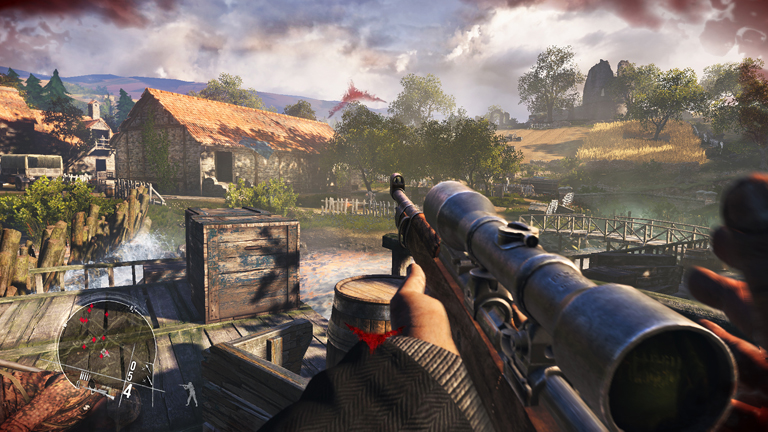 Now for some next gen console goodness, we have Lords of the Fallen, a new RPG executive produced by Tomasz Gop of Witcher fame.  Our hero,  Harkyn is a big guy just doing what he does, which is battling a supernatural army of a long since dormant god who’s suddenly very cranky after his nap.

This RPG has three classes to choose from (warrior, rogue, and cleric)  at the beginning of the game, and those will lock in some of your powers from there on in, but your fighting style and weapons are up to you.  If you don heavy armor with a massive shield, you’ll likely be a bit slower but more powerful.  If you grab some lightweight rogue armor and duel daggers, you can be quick and deadly.

Lords of the Fallen is a tactical, combat focused RPG.  While there’s a narrative story, and even dialogue and actions that change the fate of the world (it has several different endings), the true place this game shines is in its combat system.  This is no hack and slash title.  It requires patience and the ability to learn how to fight each individual enemy who will also change their fighting style at certain intervals during battle just to keep you on your toes.  It’s a game the encourages exploration, but isn’t entirely open world.

The graphics are beautiful, the sound is top notch, and the various fighting styles and tactics are what are going to make this game really great.  It’s definitely one I’m excited for.

Lords of the Fallen is coming sometime in 2014 for PC, Xbox One, and Playstation 4.