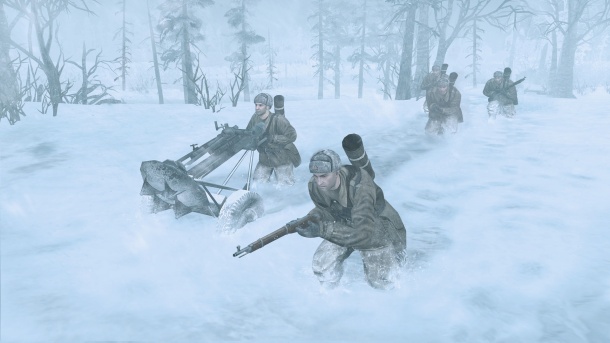 I said BRRRRR. It’s cold in here. There must be some….no, wait. That’s the chant for something else. But it’s definitely appropriate for the latest news from THQ who’ve announced Company of Heroes 2 will feature highly innovative weather condition simulating technology never before seen in the strategy genre. And that technology will be powered by Relic Entertainment’s Essence Engine 3.0 and its ColdTech System.

The new ColdTech system looks like it will provide gamers with delightful ways not only to interact with the game world, but also to dispose of enemies – for example: snow can be melted or removed and ice can be destroyed, plunging enemies into chilly waters.

The full press release can be found below.

Any historian will attest to the huge role the brutal Soviet winter played in the Eastern Front theatre of World War II and this is now realistically simulated in-game thanks to Relic Entertainment’s new Essence™ Engine 3.0 and its ColdTech system.

ColdTech includes an ‘extreme cold’ mechanic which accurately encapsulates the Soviet winter which reached extremes of -40 degrees F in 1941. At those temperatures human skin will freeze in a matter of minutes, something that is portrayed in the game. On winter maps, Infantry units exposed to the bitter cold will gradually freeze to death unless the player keeps them warm by building fires and garrisoning them in buildings. Dynamic blizzards will increase the effects of extreme cold making it even more hazardous to leave infantry in the open.

The new ColdTech system also allows the Essence Engine to dynamically paint on and remove snow, meaning that not only does it accumulate on buildings and vehicles, but it can also be melted or removed from objects by the player. Snow also has realistic depth which actually impacts troop movement and will retain persistent infantry and vehicle tracks throughout the match unless covered by fresh snow fall.

On top of the innovations in snow technology the engine allows ice to become a weapon in a smart commander’s arsenal. Not only does it have a unique texture, affecting vehicle and troop movement, but it can collapse or be destroyed from underneath troops and vehicles, plunging them into the hypothermic Russian waters. Over time destroyed ice will re-form due to the winter conditions in the game.

All of these new innovations feature alongside Company of Heroes 2’s other technological advancements like the TrueSight™ dynamic line-of-sight mechanic to make this a worthy successor to Company of Heroes.

Quinn Duffy, Game Director at Relic Entertainment commented, “Company of Heroes 2 is all about authenticity and no game based on the Eastern Front would be complete without extreme weather conditions. Thanks to the enhanced technology offered by the new Essence Engine we are able to accurately portray the bitter Soviet winter which crippled the German army.”

The original Company of Heroes was released in 2006 to critical acclaim and is currently the highest rated strategy title on Gamerankings.com (with more than five reviews) with an average of 93.82% based on 56 reviews. The game features similar acclaim on Metacritic.com with a Metascore of 93% based on 55 reviews.

Company of Heroes 2 is scheduled to be available for PC in early 2013. For more information check www.companyofheroes.com

You’ve gotta admit that this new ColdTech system sounds pretty cool right? I mean, it lets you give those nasty enemies a chilly reception. Look at all the ways you’ll be able to ice your competition. Someone needs to stop me. So many opportunities for puns….