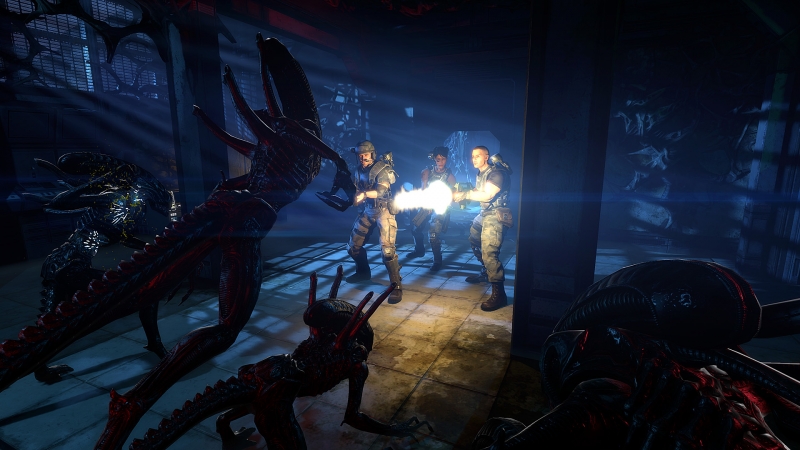 I know this might be a little too good to be true, but it’s looking more and more likely that Aliens: Colonial Marines might actually be almost sorta in the realm of being kinda in a position to be, like, finished and released in the not too distant future.  How have I come to this absurd conclusion?  Dev diaries, my friends.  Dev diaries.  Read on to see for yourself.

I’m sure you’re all well aware of this project’s seemingly endless string of delays.  Aliens: Colonial Marines has been in development, in one form or another, for over six years now.  We’ve covered the story here not once, but twice.  So I’m not going to complain too much.  Besides, the time for whining might soon be over, if a new series of developer diaries is any indication.

The first diary is entitled “Authentic Aliens,” and was released last week.  It features Gearbox CEO Randy Pitchford and his developer cohorts enthusiastically pitching their game as a true sequel to James Cameron’s Aliens.  Set seventeen weeks after the events of the film, Aliens: Conlonial Marines will return players to LV426 to see what has happened since Ripley’s explosive escape from the planet.  Everything about the game, from graphics and design, to cinematography, voice acting, and sound have been made to feel very much in line with the movie. Watch for yourself below.

The second dev diary, released today, is entitled “Xenos vs. Marines” and focuses much more on the gameplay of Aliens: Colonial Marines.  Randy Pitchford returns, and reveals that, in addition to the classic xenomorphs, the game will feature never before seen types of aliens.  Another classic aspect of the Aliens film were the weapons, and they will be returning as well.  The pulse rifle (complete with grenade launcher) and the oversized smart gun are both featured in the diary, and both look and sound pretty friggin good.  The game won’t just be filled with recycled elements, though.  New weapons and original characters will flesh out the experience.  Check out the full dev diary below.

So what do you think?  To me, the game defintiely has potential. Some of the environments seemed rather bare, and the animations of the xenos didn’t look particularly fluid or lifelike.  And the green acid on the screen?  Blech.  But the game is still six months away from release (in theory) so there is still plenty of time for polish.  The foundation for a great experience is there.  The developers really seem to be taking the material seriously, and I’m itching for a return trip to the Aliens universe. Pre-Alien 3 universe, anyway.