As awesome as the San Diego Comic Con is, there is one huge drawback to the yearly event.  The vast majority of people who want to go to it can’t.  Whether it’s time, or money, or a lifetime ban from the state of California which is totally unfair because it was just a big misunderstanding and if the Governor would just listen to me for five minutes I could explain the whole thing….. Anyway, most folks miss out on the coolness.  Luckily, much of the coolness winds up online, which is the case for Bioware’s Mass Effect 3 panel.  Read on for the details, and to watch the entire panel for yourself.

Entitled “Mass Effect: Past, Present, and Future” the panel was held during last week’s San Diego Comic Con, and featured input from a number of senior Bioware employees.  Appearing on the panel were, in no particular order, Producer Mike Gamble, Cinematics Lead Parrish Ley, Project Manager Robyn Theberge, Senior Combat Designer Corey Gaspur, QA Lead Reid Buckmeister, writers Sylvia Feketekuty and Chris Hepler, and community managers Jessica Merrizan and “Evil” Chris Priestly.  Also on hand were the voices of Kaidan Alenko, Ashley Williams, and Jack, Raphael Sbarge, Kimberly Brooks, and Courtney Taylor.  The panel was broken into four major segments: the Extended Cut, the new multiplayer content, the writing process, and questions from the fans.  You can watch the whole thing below.  But get comfy, because it’s almost an hour long.

Pretty cool, right?  And I’m not just talking about Jessica’s bitchin Ashley armor.  The panelists all seemed sincere in their passion for the job, and their appreciation of the fanbase.  My favorite part was the spontaneous applause at the mention of Lair of the Shadowbroker. Best. DLC. Ever.  On the other hand, I could’ve done without Chris Hepler’s offhand remark about Shepard’s breath scene at the end being a last gasp before dying.  Thanks a pantsload for that image, Chris.  Speaking of images, they left us with one final slide to ponder for the time being.  I’m not sure what to make of it, really. 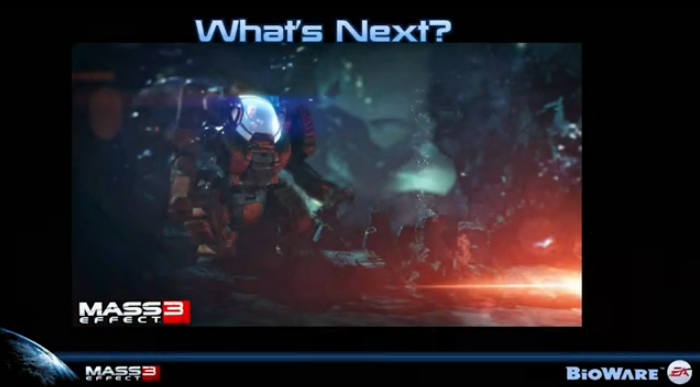 Soooo… Shepard journeys to Bikini Bottom to recruit Patrick onto his squad? “Whoooo lives in an Atlas Mech under the sea? Com-man-der Shep-pard!”