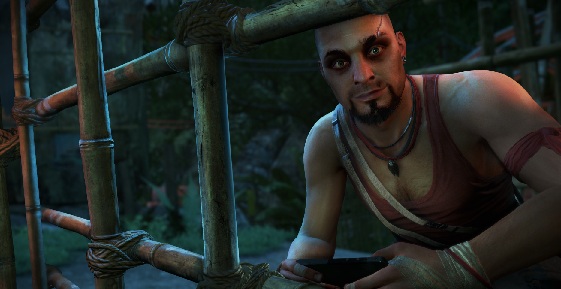 It wouldn’t be the weekend without a new trailer, and thanks to Ubisoft, this week we have more footage from their upcoming release Far Cry 3.

Entitled ‘The Savages’, the trailer introduces us to Buck and Vaas Montenegro – two of the most violent men you’ll ever have the displeasure of meeting. Buck is a depraved, violent, torture-loving mercenary who doesn’t fight fair and plays for keeps. His weapon of choice is is outsize Bowie knife and it fits his unrelenting brutality perfectly. He’s from Australia, however as an Aussie I’m really not sure what’s going on with his accent, given it sounds more like a merging of Kiwi (New Zealander) and South African. But hey – yay for more Aussie characters, right?

Vaas is a psychotic pirate warlord and slave trader who views killing as entertainment and has a preference for kidnapping innocents, taking ransom money and then selling them as slaves regardless. He’s an expert shot and a savage hand to hand warrior whose body bears a multitude of scars from all the fights he’s found himself in.

Both Buck and Vaas feature in Far Cry 3, and you can see a taste of them in action in the trailer below.