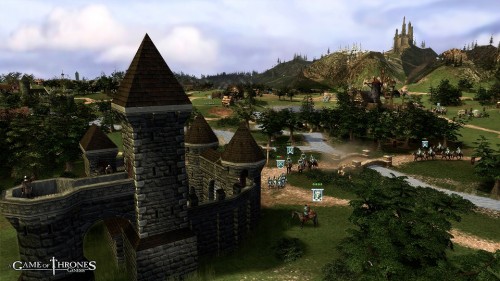 With the success of the Game of Thrones tv show, it was only a matter of time before we started seeing Game of Thrones related content in other mediums. Developer Cyanide Studio has taken on the challenge of bringing the world of Westeros to life in their upcoming strategy game, Game of Thrones Genesis. The main game campaign will be set 1000 years before the events of the book, and will cover the founding of Westeros to the capture of the nation by Aegon the Conqueror and continuing with the War of the Usurper. Players can raise armies, beseige castles and even get up to some Lannister themed dirty tactics play should they wish. The game will feature a main single player campaign as well as 8 player multiplayer, and will be releasing on September 29th.

“A Game of Thrones – Genesis” is the video game adaptation of George R.R. Martin’s best-seller series of novels A Song of Ice and Fire. In this strategy game developed by Cyanide Studio, your political prowess will be as important as your strategic and military skills!

Thanks to a well-developed single player campaign written under supervision of the author, “A Game of Thrones – Genesis” immerses you into the heart of the battles and intrigues between the Houses that shaped the Kingdom of Westeros.

From Nymeria’s arrival in the Kingdom of Dorne to the awakening of the “Others” beyond the Wall, you’ll live the origins of the A Song of Ice and Fire saga through more than 1000 years of history. From year -750 to year 299, you will take part in Westeros’ founding events and largest battles, such as Aegon the Conqueror’s invasion of the continent or the War of the Usurper.

“A Game of Thrones – Genesis” is also a great multiplayer game. Up to 8 players confront each others to claim the Iron Throne in intense games where alliances, betrayals, cheap shots, and pitched battles take place!

To find out more about the game, and check out some recently released screenshots, head on over to the official website