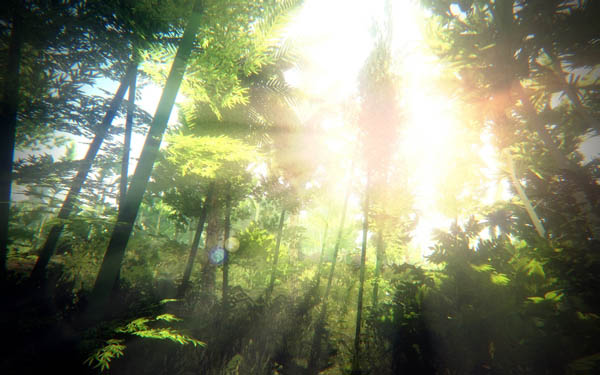 If you ever tire of the vast snowy tundras of Skyrim, the icy, craggy mountainous expanse, or the frozen hearths of Winterhold, why not just make Skyrim a tropical paradise?  That’s what one college student named Scott Chaunce did and it looks like warm, moist paradise (only probably with bigger spiders).

We all love to have  fun with modding games, and this is certainly one I wouldn’t have thought of.  Of course now I’m curious, but I play Skyrim on my Xbox (Why? Why did I do that?).    Mr. Chaunce, AKA Soolie, earned some recognition on Bethesda’s official blog for his work, which he admits may have been inspired by a recent trip to Thailand.

What I expected to see was simply “Skyrim with sand”, but what I saw didn’t even look like Skyrim anymore. Then out of curiosity I decided to try some more things. I quickly changed the lighting and some more textures. It really was starting to feel like a different game. It was at this point that I realized that I didn’t actually need to create my own new lands to play in a tropical environment. I realized that I already had a brilliant landscape to work with; a landscape that was already populated with NPC’s and towns, all with their own unique quests and dialogue. Despite being full of snow, ice and towering pines; Skyrim had essentially become an empty canvas for me to work on, with the potential for it to become absolutely anything. This is really the point where I decided to create Tropical Skyrim.

This sort of thing makes me absolutely giddy.  We’ve touched a little on mods here at Save Game  and I’m always excited when players can create new content for games and share it with others.  It feels good, and like some secret thing that a lot of players don’t know about.  Not to mention that if I ever make a mod work at all I sort of feel like a wizard, like yeah I know computers and can do things with them (LIES).

There’s a whole interview with Soolie over here on Bethesda’s blog and it’s definitely worth a read.   And there’s even a video of the world so you can wish you were there… you know except that there are still dragons and giant spiders.