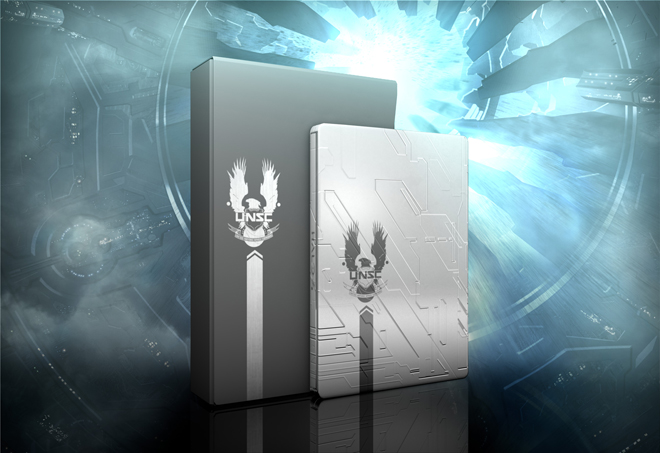 I hear what you’re saying… “Ughhh, another Halo story?”  Yes, another Halo story.  What can I say?  I’m a fan.  A fan with a hundred bucks less to his name after I pre-ordered the Halo 4 Limited Edition, which was announced earlier today.  While there will be no Legenday Edition to put on your bookshelf this time around, the package comes with a wealth of extra goodies that is sure to please Halo fans everywhere.  Read on to see exactly what is included.

Unveiled on this weeks edition of the 343 Industries Halo Bulletin, the Halo 4 Limited Edition comes packed with extras that will enhance both the singleplayer and multiplayer experiences.  First off, the Limited Edition gives you access to three competitive map packs, each featuring three locations, which will be releasesed as post-launch DLC.  So instead of having to buy the map packs, you’ll be able to download them for free.  The Limited Edition will also bestow upon its owner six specializations, which can be used to unlock higher ranks and customization options in multiplayer.  Players more interested in the single player campaign can look forward to reading the UNSC Infinity Briefing Packet, an in-universe booklet which includes all sorts of information about the Spartans, and the ship they serve on.  Also included in the Limited Edition is a 90 minute extended cut of the Forward Unto Dawn live action series we reported on back in April.  Finally, you can expect to be showered with an assortment of unique in-game items and XBOX Live avatar props.

Still… I gotta say, the lack of a true Legendary Edition has me a little bummed.  The Legendary Editions for Halo 3 and Reach look great on my bookshelf (don’t worry, my girlfriend approves of them… for now) and I was looking forward to adding to my collection.  As 343 community manager BS Angel explained, the team wanted to focus their efforts on producing a single special edition so that fans wouldn’t have to choose.  Ehhhhh… I’m not sure if I buy that excuse.  Prior Legendary Editions didn’t contain different bonus items.  They just contained more of them.  Oh well, maybe prior Legendary Editions just didn’t sell well enough.  Who knows.  But, as if in anticipation of the disappointment they were going to cause, 343 also released the following animated version of the Halo 4 cover art, complete with a new kickass score sample.  Enjoy!

I feel better now, don’t you?