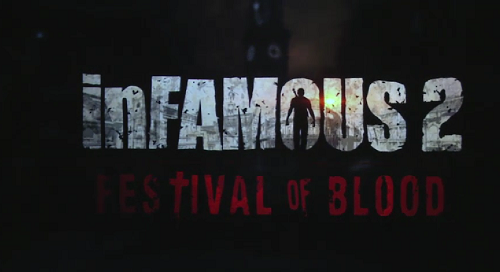 Just in time for Halloween, Sony have announced that Infamous 2: Festival of Blood will be released on the PSN on October 25th for North America, and October 26th for the UK. The game will be priced at a hefty $14.99, but extra content such as Move support, as well as the ability to play the content without having Infamous 2 should soften the blow. As mentioned, the content can be run as either a standalone to Infamous 2, or as an additional piece of Infamous 2 content.

inFAMOUS 2 Festival of Blood will be a brand new standalone single player DLC for download via PSN. Vampires swarm New Marais, and revered superhero Cole MacGrath has been bitten. To save his soul – and the city – he has just one night to find and kill the head vampire. Featuring new missions, themed environment settings, plus new characters and enemies, Festival of Blood explores the darker side of the inFAMOUS universe. Previous inFAMOUS games will not be needed to play this DLC.

If you haven’t already, check out the official trailer for Festival of Blood: