The Iron Banner comes to Destiny

While it’s true that competitive multiplayer is not every shooter fan’s idea of a great time, for those who enjoy squaring off against other players, Destiny’s Iron Banner just might be a dream come true.  Read on to learn more about this new mode where you’ll be able to take all of your fancy gear into battle.

While players are able to use all of their weapons and armor in Destiny’s Crucible multiplayer arena, the level advantages are all removed.  So even though your legendary sniper rifle might still look the same, it doesn’t do any more damage than the basic pea shooter your opponent is wielding.  The same goes for armor.  This presents the most level playing field possible for all players, but it also eliminates some of the fun.  What’s the point of striding into battle with your best gear when they don’t make any difference?

The Iron Banner changes all that.  Some of you might remember this game mode from Destiny’s beta.  But if you don’t, here’s what it’s all about.  The Iron Banner allows players to bring their best weapons and armor into battle with the damage and defense levels intact.  This gives players with high level gear a clear advantage, making the quality of your weapons and armor extremely important.  If you can’t deck out your Guardian in legendary gear (at the very least), the Iron Banner might not be for you.  But if you’ve been itching to unleash biblical amounts of carnage from your exotic weaponry, the Iron Banner is your chance.

Competing and winning in The Iron Banner will grant players special rewards, including exclusive armor shaders and legendary gear.  This special limited-time game mode is scheduled to run from October 7th through the 14th. 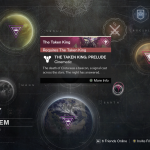