One of the most memorable aspects of the original BioShock was its brilliantly twisted enemies.  Names like “Big Daddy” and “Little Sister” still trigger vivid memories in those who played the game.  So when Irrational Games announced a follow up, BioShock Infinite, attention soon turned to what types of bizzare adverseries the studio would be conjuring.  Knowing this, they have launched a new video series entitled “Heavy Hitters” which will feature behind the scenes looks at some of the game’s more powerful threats.  Read on to get your first look at the Motorized Patriot.

Did you catch Art Director Nate Wells calling that monstrosity a “clockwork terminator?”  Hah!  An apt description.  I’m super excited for this game, folks.  Perhaps even super duper excited.  The original BioShock blew me away with its artistry, wit, and inspired gameplay.  Everything I’ve seen from this newest entry in the series looks fantastic, and I can’t wait to play it.  The game launches October 16th in North America, and October 19th worldwide. 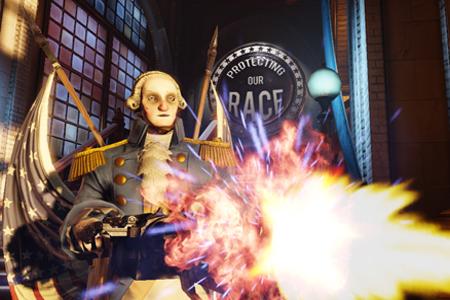