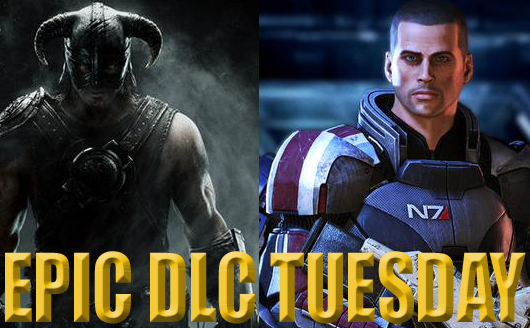 The first major expansion for Skyrim, last year’s roleplaying behemoth from Bethesda, gets released today exclusively on Xbox Live.  Entitled Dawnguard, it tells the story of Dovahkiin’s encounter with the Vampire Lord Harkon, and will allow players to either fight against him by joining the Dawnguard, or become one of the bloodthirsty horde yourself.  Or both.  Who knows?  The actual story of Dawnguard has been kept under wraps, and we won’t actually know what happens in it until the first batch of diehard fans burn through the roughly 15 hours of gameplay.  Although PC and PS3 versions are inevitable, for now, Dawnguard is an Xbox exclusive, and will set you back 1600 Microsoft points.

Mass Effect 3: Extended Cut releases today as well, and while you won’t have to shell out money for it, the emotional expanse you’ll have to pay might be far greater than any amount of Microsoft points.  Created bu Bioware in response to the controversial (and by controversial, I mean soul scarring) ending to Mass Effect 3, the Extended Cut has been designed to give players a better understanding of what the heck actually happened in the final minutes of the game.  While the original ending of the game remains in place, Catalyst and all, the extended cut will use new cinematics and dialogue to expand the story, and provide fans with the closure that had been sorely lacking.  Bioware has advised fans that since the new content will begin during Shepard’s assault on The Illusive Man’s base, fans should load a save from before that mission to get the full Extended Cut experience.   Bioware has also tweaked the game’s EMS settings, allowing a score of 3100 to unlock all of the possible game-ending choices.  Previously, it had been debatable whether or not a high enough EMS score to open all the final scenarios could be achieved through the single player campaign alone.  Mass Effect 3: Extended Cut is available on all platforms, free of charge.  Just keep those tissues handy.