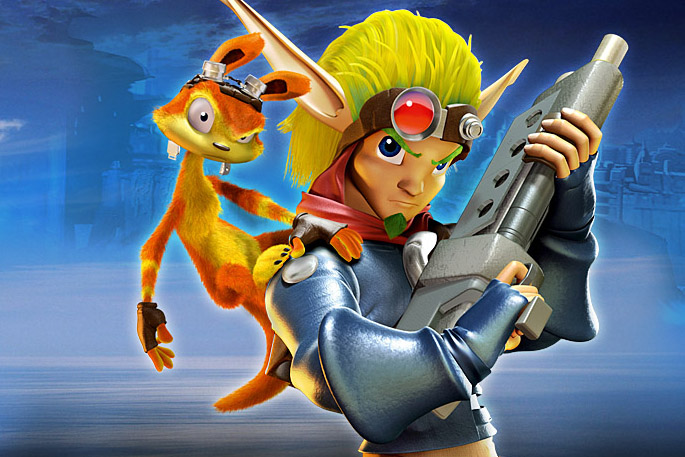 Ratchet who?  Clank what?  As far as I’m concerned, the Jak and Daxter trilogy was the number one platforming series on the Playstation 2.  And now all three games, Jak and Daxter: The Precursor Legacy, Jak 2, and Jak 3, are getting re-released on PS3 in a single Blu-Ray package.  But these aren’t simple ports.  These games have been given the deluxe treatment, and there are some wonderful new surprises in store for fans of the series.  Read on for more details.

As announced on the Official Playstation Blog, the games have been completely remastered to run in 720p HD.  While this isn’t the highest resolution possible on the PS3, it’s still quite a jump from the SD televsions their PS2 counterparts were played on.  All three games have also been enhanced to provide full stereoscopic 3D.  I’m sure all twelve of you out there with 3D televsions and glasses are thrilled.  Most interesting of all is the inclusion of Trophies.  In all, over 100 will be available, spread over the three games.  A full list hasn’t been made available yet, but SONY has offered us a sampling:

OK, OK, I hear you… you want to know when you’ll be able to get your hands on this collection of classic awesomeness.  Well, I have good news.  Especially if you live in the USA, because The Jak and Daxter Trilogy will go on sale starting February 7th.  If you live in anywhere else, you’ll sadly have to wait a little longer.  The collection goes on sale World Wide on February 22nd.

As a side note, we here at Save Game have reached out to Sony, Naughty Dog, and Mass Media for an answer as to why the criminally underrated and seemingly forgotten racing spinoff Jak X: Combat Racing was thoughtlessly not included in this collection.  We have not heard anything as of yet, but we will let you know if and when we do.

As a side side note, we haven’t really reached out to anyone.  But Jak X was a pretty sweet game.