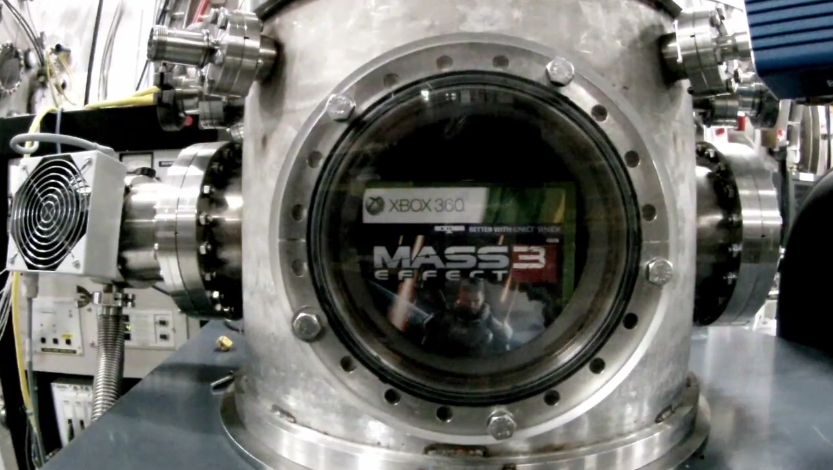 Look!  Up in the sky!  It’s a bird!  It’s a plane!  It’s… it’s… it’s a copy of Mass Effect 3 sealed inside a stainless steel pressure vessel attached to a weather balloon.  In one of the most unexpected publicity stunts in recent memory, EA has created a special version of Mass Effect 3, known as the Space Edition, and all you have to do to get one is go outside and look up.  Okay, it’s a little more complicated than that.  Read on for the details, and a humorously earnest trailer.

First off, let me assure you that everything you’re about to read is real.  I didn’t make any of it up.  Bioware is launching copies of Mass Effect 3 into the upper atmosphere of Earth.  Each copy is equipped with a tracking beacon, and Bioware has provided a website to follow their journey.  All you have to do to get yourself a copy of Mass Effect 3: Space Edition is be the first person to find one when it lands.  Oh, and sign a rather lengthy legal waiver on the contest’s website.

The first two copies of the game floated into the sky above San Fransisco this morning, and if reports on Bioware’s own forums are to be believed, one wound up on a cliff, while the other is apparently stuck in a redwood tree.  Neither one can be reached.  But fear not, you still have ample oppurtunity to find a Space Edition of your own.  In the coming days, launches will take place in Las Vegas, New York, London, Paris, and Berlin.  Again, I’m not making this up, folks.  To prove it, here’s a trailer with splashy graphics and heroic music.

See?  It’s real.  As much as I joke about this, I’m not gonna lie.  If one of these things was anywhere near my house (and by near I mean a hundred miles) I’d be out there chasing it down like the rabid fan I am.  Kudos to whoever at EA was crazy enough to think up this idea, and actually make it happen.  I hope it pays off.  Those containers look expensive.