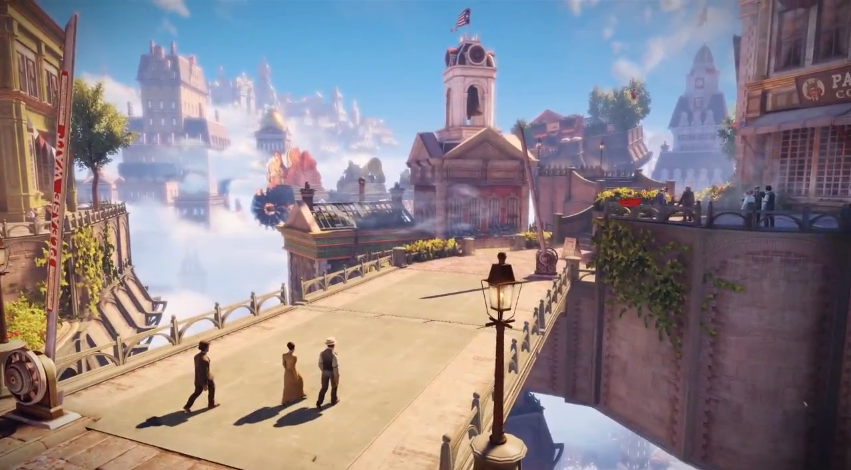 Remember back when we used to complain about not having seen any new Bioshock Infinite footage for months?  Well, those days are long gone now, as Irrational Games has released another brand new trailer for the game.  Read on for the details.

The newest trailer was unveiled earlier today on the Irrational Games website, and is titled “City in the Sky.”   Highlighting the game’s setting, characters and story line, City in the Sky seems to be targeted at those who might not have been keeping that close an eye on the development of Bioshock Infinite.  But that doesn’t mean that the hardcore crowd will be disappointed.  Far from it.  The trailer features a wealth of new game footage, some of it positively stunning.  Fans who have followed the game’s development will catch glimpses of familiar enemies such as the Handyman, the Mechanized Patriot, and Songbird.  But the true star of this trailer is the city of Columbia itself.  The scale of it, the beauty, and the underlining menace.  It’s all on display here.  Watch the trailer for yourself below.  Just beware of some potentially spoilerish stuff, and a hefty dosage of blood and gore.

Or better yet, go to YouTube, and watch it in fullscreen HD if you can.  There is so much going on in this trailer, it’s hard to catch it all with a single viewing on a small screen.  There will likely be more trailers and promotional videos as Irrational continues its final publicity blitz before Bioshock Infinite launches on March 26th.  That day can’t come soon enough.