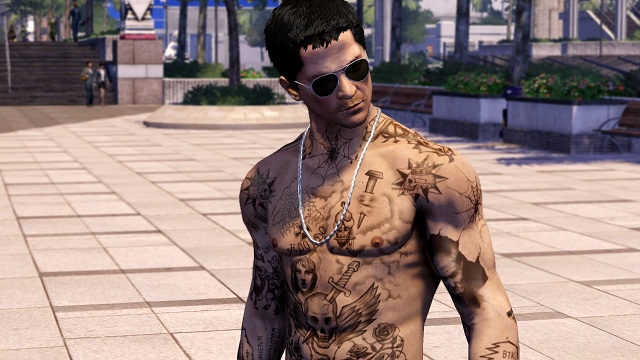 Starting off the DLC offerings is the Dragon Master Pack – which offers players a selection of weapons, character upgrades, martial arts moves and missions which were previously only available individually at pre-order. The Dragon Master Pack actually includes five pre-order packs in one, each of which can also be purchased separately should the other four packs not do it for you. The included five packs are:

The Drunken Fist Pack is next up, and it provides Wei with a new fighting style – while in combat filling the face meter gives Wei the ability to drink from a flask of potent alcohol – enabling him to perform special moves and powerful counters unavailable to the sober man! In addition to entering this special ‘Drunken Stance’ to perform unique moves and counters, players will also have at their disposal a new outfit.

The Square Enix Character Pack introduces three new outfits for Wei Shen to don, based on three well known characters from Squae Enix franchises. Each outfit includes its own buff and signature weapon:

Not to be confused with Gangnam Style (although that would be interesting) the Gangland Style Pack provides three new tattoo schemes for Wei Shen. On offer are the Japanese Yakuza, Russian Mafia and Maori Mongrel Mob tattoos, each featuring their own buff. The Yakuza style tattoo slows heart rate by 50%; the Russian Mafia style increases gun accuracy by 50%; and the Mongrel Mob Style increases melee damage by 40%.

Stepping away from costumes and weapons, the Zodiac Tournament Pack is the second gameplay extending add-on for Sleeping Dogs. Receiving an invitation to an exclusive tournament on a hidden island off the coast of Hong Kong, Wei faces off against the best of the best as he takes on fighters from across Asia in the fight to the death. The Zodiac Tournament features:

All packs are available to download via Xbox Live, Playstation Network and Steam. For more information on the DLC packs, check out the game’s Official Website.