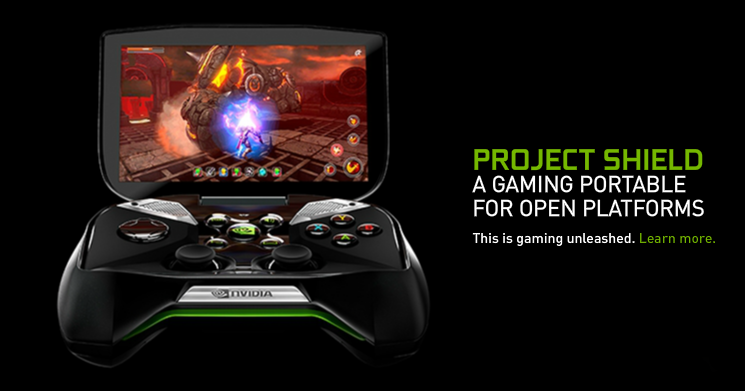 The handheld videogame market has always been a tough nut to crack.  For every success, there seems to be a dozen failures.  But that never seems to stop new companies from trying to soar where others have crashed and burned.  This year’s challenger comes from an unlikely place: chip maker Nvidia.  Read on for all the details.

There was a time when the Consumer Electronics Show, or CES, was the premiere place for companies to unveil new videogames and gaming consoles.  That was before E3, however.  These days, CES is more concerned with smartphones and televisions.  But that didn’t stop Nvidia from revealing a brand new handheld videogame console which they hope will revolutionize mobile gaming.  They call it Project Shield.

Built around the company’s new Tegra 4 chip, Project Shield consists of a full size gaming controller, attached to a 5 inch 720p multitouch display with built in stereo speakers.  It runs of Google’s Android Jelly Bean operating system, and connects to the internet through “game speed” 802.11n 2×2 MIMO Wi-Fi.  Players will be able to access games through both the Google Play store for Android, and Nvidia’s own Tegra Zone. 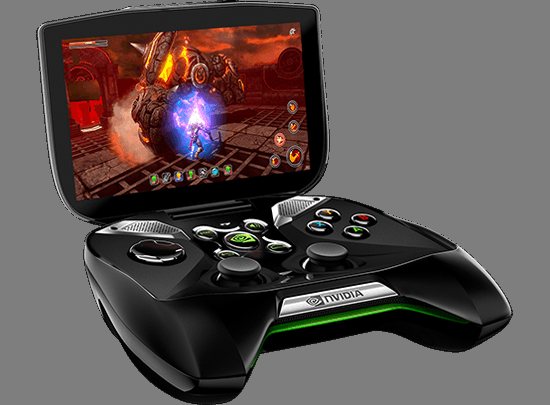 While a handheld console dedicated to Android games sounds cool and all, this is Nvidia we’re talking about here.  They’re not the kind of company to settle for “cool.”  In addition to its Android functionality, Project Shield will be able to connect to a Windows PC through Wi-Fi, and stream PC games right on its screen.  This will allow players to access their PC library, including Steam games, anywhere within Wi-Fi range of their computer.  Through the use of a built in HDMI port, players can even connect Shield to their HDTV, and play their PC games on the big screen.

That was the good news.  Now, here’s the bad news.  For all of that connectivity goodness to work, your PC will have to be equipped with an Nvidia graphics card; a GeForce GTX 650 or higher to be precise, and it will have to be updated with the latest GeForce drivers.  (You didn’t really think Nvidia would allow ATI owners to get it on the fun, did you?)  In addition to the graphics card requirement, your PC will need to have at least an Intel Core i5, with a minimum of 4GB of memory.  More bad news can be found in the release date and price… which don’t exist.  While Nvidia is targeting a 2nd quarter 2013 release for Project Shield, they were mum on price.  But this is not an entry level device.  This is bleeding edge tech meant for the enthusiast gamer, so you can expect the price point to reflect the target audience.

And just because they can, Nvidia released a nifty little video showing… well, showing how Project Shield would be put together if it was assembled by a powerful Jedi.  Take a look.

Nifty, huh?  With all those components flying around and connecting with no discernible outside forces at work?  Like I said… Jedi.  We’ll surely be hearing much more about Project Shield in the months to come, so we’ll keep you updated.  In the mean time, if you’re interested, start saving pennies.  I have a feeling you’re gonna need ’em.