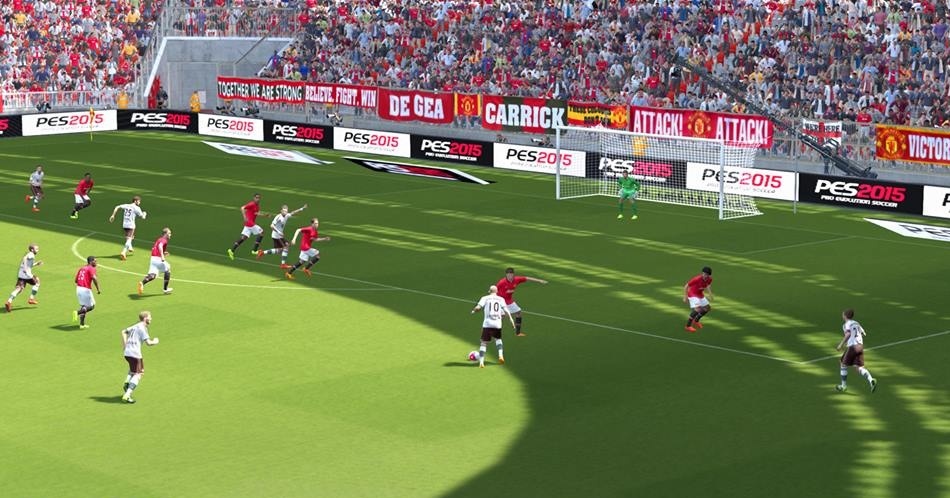 Konkani have announced the first details for PES 2015, set to release on PS4 and Xbox One. Announcing new features and gameplay systems, the focus is on enhancing the on-field realism and improving the core features of the previous game.

According to Konami, the PES Productions Team has completely reworked the in-game shooting and goal-keeping mechanics:

PES 2015 marks the first full implementation of Kojima Productions’ FOX Engine within the PES franchise. Showcasing improvements to visuals and in-game advancements, Konami have announced the following improvements thanks to the new engine:

Konami have also confirmed that PES ID is returning, stating that teams will be set up to play as they do in real-life and their star players will work within this framework, but they will be instantly recognisable via their runs and playing styles. The world’s greatest teams will not only move and find space like they would in real life, they will also defend or attack like them automatically. Teams will also automatically adopt their real-life counterparts’ game plan, whether it is counter-attacking, out wide, or defensively minded.

With these advancements in place, Konami have also detailed new options and enhancements to established favourites set to debut in PES 2015:

Konami have promised more updates in the coming months, so for those soccer fans amongst us, expect more info on game presentation, ball physics and uniform vibrancy.

Ok. I added the bit about uniform vibrancy. That’s probably not a new feature. But for all the official announcements, keep checking our site.