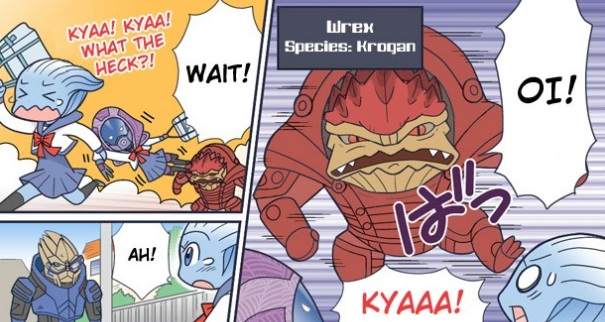 We come across some weird things in our quest to bring you all the Mass Effect related stories on the internet – but this find definitely has to take the title of weirdest game tie-in material ever. A Japanese gaming magazine site, Dengeki Online (similar to Gamespot and IGN) has producted a ‘previously on’ style comic which is supposed to help those new to the series understand what has occurred previously in the Mass Effect universe in the lead up to the release of Mass Effect 3.

The comic features stylized versions of many of the main squadmates from both games (yes, including Tali, Liara, Garrus, Wrex and Mordin) and has now been translated for us English-speaking folk so we can understand what is going on. Though I’m not sure this comic can be understood because it…well. Perhaps it’s better to let you see for yourself.

To read the translated version of the comic, click here. And, as it is a Japanese comic, don’t forget to read it right to left. Othewise it will make even less sense than it does already….

I don’t know what is more absurd. Seeing the Mass Effect squadmates like this or the high school storyline that ties the plot points together.