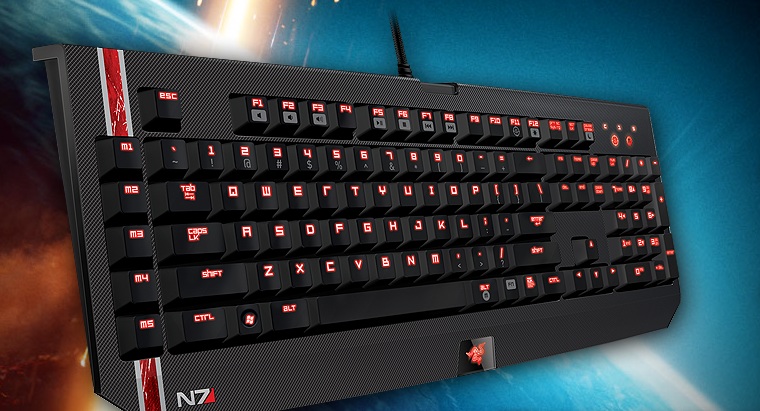 We’re in the home stretch for the release of Mass Effect 3, and with around two weeks to go before the game officially launches, Razer have announced they will be supporting a range of Mass Effect 3 themed gaming accessories, for both the PC and Xbox360.

The range includes the Black Widow Ultimate Gaming Keyboard, which is fully backlit and features a heavy-duty mechanical key infrastructure. The Imperator is a very swanky looking mouse, which has been ergonomically designed, features a rubberized contoured thumb grip (yes, I did include that just to say ‘rubberized’) and a 4G dual sensor system. No PC gaming setup is complete without a stylish mouse mat, and the Vespula is just the ticket for those hardcore gamers out there. The Vespula is dual sided and features a memory conformance wrist rest for those marathon gaming sessions.

Also part of the range is the Chimaera 5.1, a set of gaming headphones which are compatible with both PC and Xbox360. It features 5.1 Channel Dolby Surround Sound, comes with a detachable 2.5mm microphone cable and has volume and mic control buttons on the headset itself.

For those Xbox360 gamers who want a Mass Effect themed gaming controller, the Onza may just be the ticket. With adjustible resistance on both analog sticks, two additional fully programmable buttons, and backlit action buttons, the Onza will likely bring stylish gaming into your loungeroom.

Finally, Razer have also included a messenger bag which can accommodate up to 15″ laptops, and an iPhone protection case for those of you who want to showcase your love of Mass Effect to the world. Each of the accessories features the iconic N7 logo that is synonymous with the series, and the red N7 stripe also features prominantly in most of the designs.

So if you’re a Mass Effect 3 fan who wants everyone to know where their allegiance lies – these accessories might just be perfect for you.

You can see a video of the products below, although it more shows off footage of the game than the actual range here. Best to check out the individual product pages linked above if you want to see the accessories in greater depth.