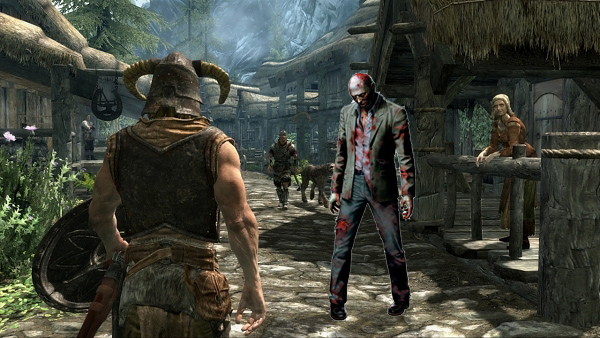 It’s Resident Skyrim! Awwww yeah, my crazy mashup prayers have been answered.  I can’t wait to fus-ro-dah me some zombified Argonians.  OK, it’s not really Resident Skyrim.  I’m sorry if I got your hopes up.  But the creator of Resident Evil has indeed teamed up  with Bethesda Softworks to create a new game.  Details are extremely thin right now, but read on to find out what we know.

In a recent interview with Japanese gaming site Famitsu, which was translated by Andriasang and reported on by Joystiq, Resident Evil creator Shinji Mikami revealed that his latest project is codenamed “Zwei.”  Being created by his Tango Gameworks studio, the game will take place within the survival horror genre, and is still in the early stages of development.  While it is unknown which platform the game is being developed for, Mikami assured that it will likely appear on “HD consoles.”

So, to recap… we have no title, no setting, no platform, no images, and no release window.  All we do have right now is a genre, and the knowledge that the man who has defined survival horror for well over a decade is hard at work on a new title, and he has the full resources of Bethesda behind him.  Color me optimistic, folks.  With E3 just around the corner, we’re sure to be hearing more about Zwei in the near future.